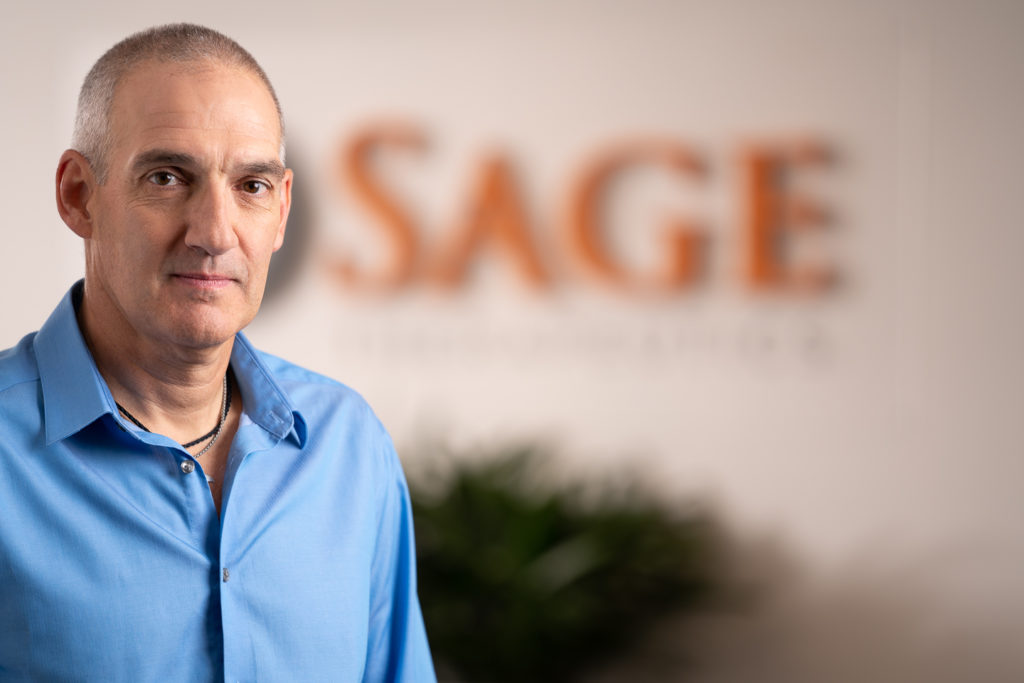 Dr. Al Robichaud is Chief Scientific Officer at Sage Therapeutics, a clinical-stage biopharmaceutical company committed to developing and commercializing novel medicines to treat life-altering central nervous system disorders. Al received his B.S. in chemistry from Rensselaer Polytechnic Institute. He worked as a staff chemist at FMC Corporation for about two years before returning to school to earn his PhD in Organic Chemistry from the University of California, Irvine. Al next conducted research as an American Cancer Society postdoctoral fellow in organic chemistry at Colorado State University. Before joining the team at Sage Therapeutics, Al held positions at Merck Pharma, DuPont Merck Pharma, DuPont Pharmaceuticals, Bristol-Myers Squibb, Wyeth Pharmaceuticals, and Lundbeck Research. In our interview, Al tells us more about his life and science.

Life Outside of Science (2:18)
Al has been an avid scuba diver for most of his life, and he particularly enjoys exploring the ocean in the Caribbean with his family.

The Scientific Side (4:12)
The team at Sage Therapeutics is focused on delivering new medicines for people with central nervous system disorders, such as depression. The compounds they have developed modulate the activity of receptors in the brain that respond to specific neurotransmitters.

A Dose of Motivation (5:36)
“Chance favors only the well-prepared mind.”

What Got You Hooked on Science? (6:46)
Chemistry captivated Al from an early age. He recalls playing with his chemistry set and exploring science through chemistry. Al’s father was a dive instructor and oceanographer, and this sparked Al’s passion for marine biology. However, Al realized that there were relatively few career opportunities in marine biology, so he gravitated more towards his interests in chemistry. Towards the end of college, Al had to make a decision about whether to go to graduate school, and he wasn’t sure he wanted to go. Committing to one career for the rest of his life seemed daunting, so he decided to get some work experience first. Al accepted a position a small company where he worked in the lab studying the chemistry of pesticides. Through this experience, Al realized that he wanted to get more involved in research and chemistry. He worked at the company for about 1-2 years before enrolling in graduate school.

The Low Points: Failures and Challenges (18:25)
Al’s group recently had a compound approved for the treatment of postpartum depression. This was an exciting development, but they have come to realize over the years that there is a lot of stigma surrounding postpartum depression. As a result, people are afraid to admit they are suffering from the disease and seek treatment. To help address this challenge, Sage is working with patient advocacy groups to try to reduce this stigma. Also, they are working to make the medicines they create more accessible to more patients. Their first medication had to be delivered intravenously, but the next molecule they are working on will be able to be taken orally. This new formulation might make it easier for more patients to receive treatment.

A Shining Success! (21:23)
For Al, creating a scientific, development, and commercial group at Sage that has an opportunity to make a substantial impact for patients has been really meaningful. Their team isn’t looking to make incremental progress in medicine. Instead, they are tackling diseases where there aren’t many treatment options, and they are working to develop new ways to treat diseases of the central nervous system. Building a team that can achieve their goals and doesn’t give up when times get tough has been a major success.

Most Treasured Travel (28:05)
Throughout his career, Al has enjoyed attending conferences and collaborating with groups internationally. When he was working at Wyeth Pharmaceuticals, they collaborated with a small biotech company based in central Italy. Italy is a beautiful country with an interesting culture, phenomenal food, gorgeous churches, and fascinating scientific history that goes back hundreds of years.

Quirky Traditions and Funny Memories (30:00)
The environment at Sage is relatively casual and informal. There are also quite a few practical jokers at the company. When Al first started working there, he decided to paint his office a dull green color. While he was away on a trip, the team snuck into his office and painted the walls bright orange. It was a big surprise when he returned. In response to his newly painted walls, Al filled the CEO’s office with inflated balloons from floor to ceiling while the CEO was away. In addition to humorous pranks, Sage has clubs where people get together for different activities like running and kayaking. They also have a gym downstairs that everyone is given a membership to, and they have their own Sage spinning class.

Advice For Us All (35:29)
Tell the truth all the time. Also, in terms of science careers, science can be anything you want it to be. There are so many opportunities for people to improve the environment, health, society, and people’s lives. Anyone could make a huge impact on the world through science.

Guest Bio
Al directs the scientific and managerial aspects of the pharmaceutical research group at SAGE Therapeutics. SAGE Therapeutics is a clinical-stage biopharmaceutical company committed to developing and commercializing novel medicines to treat life-threatening, rare central nervous system, or CNS, disorders. SAGE’s lead program, SAGE-547, is entering Phase 3 clinical development for super-refractory status epilepticus, or SRSE, and is the first of several compounds the Company is developing in its portfolio of potential anti-seizure medicines. SAGE’s proprietary chemistry platform has generated multiple new compounds that target GABAA and NMDA receptors, which are broadly accepted as impacting many psychiatric and neurological disorders. Their research particularly targets compounds related to synaptic transmission and neuroinflammation.