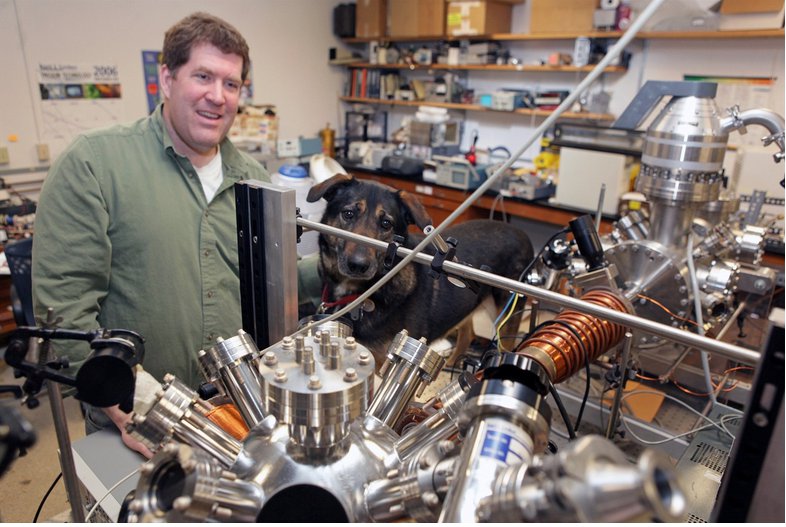 Dr. Chad Orzel is the R. Gordon Gould Associate Professor of Physics at Union College. He is also author of the popular science books How to Teach Physics to Your Dog, How to Teach Relativity to Your Dog, Eureka: Discovering Your Inner Scientist, and the soon-to-be-released book Breakfast with Einstein: The Exotic Physics of Everyday Objects. In addition, Chad regularly contributes blog articles for Forbes Magazine. He received his B.A. in Physics from Williams College and his Ph.D. in Chemical Physics from the University of Maryland. Before joining the faculty at Union College, Chad conducted postdoctoral research in the Physics Department at Yale University. In our interview, Chad shared his experiences from his life and science.

Life Outside of Science (2:00)
Free time can be hard to find with two kids and a puppy at home, but Chad enjoys hanging out with his family, reading science fiction and fantasy books, and playing basketball when he has the chance.

The Scientific Side (3:04)
Chad studies ultracold atoms to improve our understanding of atomic physics. He uses lasers to drop the temperature of samples of atoms to just millionths or billionths of a degree above absolute zero. At these very cold temperatures, the atoms move very slowly, and interesting quantum effects arise.

What Got You Hooked on Science? (9:33)
Being a scientist has always been Chad’s dream job. When someone asked him in kindergarten what he wanted to be when he grew up, Chad said he wanted to be either a paleontologist or a marine biologist. His interest in physics developed during high school with the help of an excellent physics teacher during his junior year. In college, Chad had a chance to work in a lab during the summer after his freshman year. This involved developing lab exercises for classes in the physics department, and he really enjoyed it. He took a similar position the following summer and then experimented with a more research-oriented job the next year. This led him to his undergraduate thesis area of laser cooling. Chad had a phenomenal experience in college, and decided that, like his professors, he too wanted to become a faculty member at a small college where he could help get students excited about research.

The Low Points: Failures and Challenges (16:01)
In graduate school, Chad had a tough time with his qualifying exam in his second year. It was a two-day test, and the last question on the first day had him stumped. He had no idea how to solve it. This experience left Chad shaken going into the second day, and when he didn’t immediately see how to address the next set of questions, he just shut down. Chad completely blanked. Shortly after handing in his blue book, he came up with the solutions, but it was too late. Fortunately, Chad had a second chance, and he did well on his remedial oral exam and question session with the exam committee. Later in graduate school, Chad went through nearly a full year where he felt like every day he went to the lab, he broke something. Another rough patch occurred during the first few months of his postdoctoral fellowship when the equipment wasn’t working right, and he had no idea why. Chad had to take everything apart and put it all back together again before they started getting results.

A Shining Success! (19:00)
As a postdoc, Chad did some cool experiments looking at a quantum mechanical effect that occurs when you take a bunch of atoms, cool them to close to absolute zero, and then chop the sample up into pieces. No one had ever done something like this before, and it was incredibly exciting. Not only were the results of the experiment thrilling, but Chad was also delighted to return to his graduate school group to present his findings. He intended the presentation to last about 20 minutes, but after close to an hour and a half, he still had a few slides left. There were so many questions, but he knew all the answers, and it was a phenomenal discussion.

Most Treasured Travel (28:30)
During graduate school, Chad had an opportunity to spend a summer living in a suburb of Tokyo to work with a research group that was studying neon atoms. There was a particular experiment with neon that would have nicely complemented Chad’s lab’s work with xenon, so his goal was to get this experiment to work during the trip. Unfortunately, during his final week, a critical piece of equipment broke, and they weren’t able to fix it in time to get the project done. Despite the scientific setback, visiting Japan was a fantastic experience. Chad had a particularly great time exploring the city of Nikko in the mountains north of Tokyo where you can see a spectacular waterfall, many temples and shrines, and a memorial for the founding ruler of the Tokugawa shogunate.

Quirky Traditions and Funny Memories (31:12)
In Chad’s graduate school laboratory, there were several experiments being conducted across different rooms, and there were 3-4 people working on each experiment. It was a tradition to gather the whole group together for lunch every day, and it was a lot of fun. In particular, there was another lab member who shared Chad’s enthusiasm for the show The Simpsons, so they spent time nearly every week talking about the latest episodes. Chad enjoyed having conversations with people from other parts of the lab to learn about their work, and it was great to get connected to a bigger community of people by seeing them every day.

Advice For Us All (35:11)
Sometimes you just need to cut your losses, and hand in what you have. Also, remember that scientists are people, and science is a human endeavor. Scientists are really excited about a particular area, but science isn’t something that only scientists can understand and enjoy.

Guest Bio
Chad’s research is on the behavior of atoms cooled to within millionths of a degree of absolute zero by interactions with laser light. At these ultra-cold temperatures, the quantum character of the atoms becomes more apparent, and understanding their interactions requires consideration of their wave nature and the quantum property known as spin. Outside of work, Chad keeps busy chasing after his kids (ages 10 and 7), occasionally coaching youth sports, and playing basketball with a group of faculty and students. He lives in Niskayuna, NY with his wife Kate Nepveu, their two children, and their new dog Charlie the pupper.