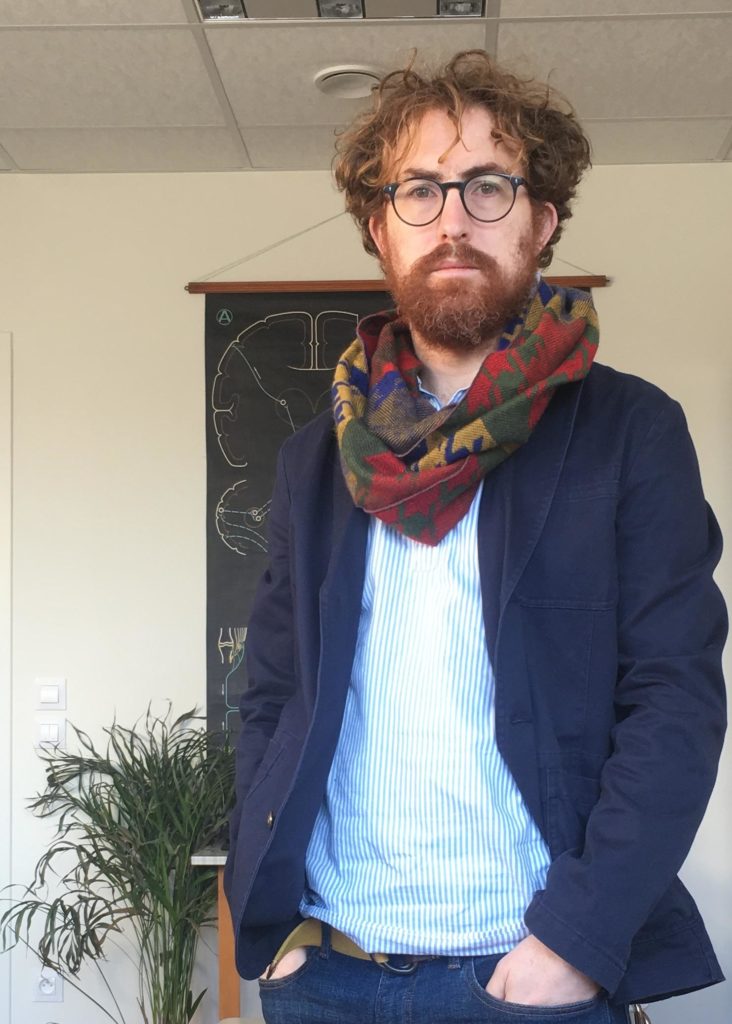 Life Outside of Science (2:07)
When Chris isn’t working, he loves spending time with his family, including his two young sons. They have been restoring their 19th century house in France and exploring the history of the home. Chris is also an avid collector of old postcards.

The Scientific Side (3:56)
Scientifically speaking, Chris is a memory researcher. He examines memory disorders to determine how areas in a healthy brain operate and are used in memory. Chris also works with patients to better understand memory disorders and help people with memory problems. He is particularly interested in subjective states and experiences related to memory, such as déjà vu.

What Got You Hooked on Science? (6:56, 9:26)
Chris’s interest in memory was first piqued during childhood through interactions with his grandfather who had dementia. When he went to college, Chris initially planned to major in geography, but once he started taking classes in psychology for his minor, he became fascinated by it. One of Chris’s early research projects involved music and memory, and his supervisor suggested that Chris could go on to get a PhD in this area. After finishing college, Chris worked as a volunteer at a memory clinic that was also active in research. This was an exciting period in his life, but Chris ultimately chose to do a PhD because he wanted to continue being a student. He was in a successful rock band, and continuing school would allow him to also continue dedicating his time to the band. Though he wasn’t accepted during his first round of applications, Chris persevered. He was successful the next year, and during graduate school Chris fell in love with research and the lifestyle of a scientist.

The Low Points: Failures and Challenges (24:33)
With his déjà vu work, it is a big challenge to be taken seriously. Many people don’t view this as a credible area of research, so Chris has to work hard to convince people that this is an aspect of consciousness that is amenable to scientific investigation. Déjà vu is really difficult to study because it is an intense, subjective, and unpredictable phenomenon. Though Chris has submitted applications for funding on this topic, he has not yet had success. This is frustrating because there are fundamental elements of neuroscience that could be better understood by researching déjà vu, and there is a lot of public interest in finding out what this phenomenon is, particularly for those who experience it intensely and frequently.

A Shining Success! (28:07)
Chris shares his own memories of a variety of successes in science including the excitement surrounding publishing his book on déjà vu, the thrill of getting his first research article accepted in a scientific journal, and the rewarding celebrations of the successes of the students he trains.

Book Recommendations (30:20)
The Cognitive Neuropsychology of Déjà Vu by Chris Moulin, The Man Who Mistook His Wife for a Hat and Other Clinical Tales by Oliver Sacks, A Journey Round My Skull by Frigyes Karinthy

Most Treasured Travel (31:54)
A favorite place to visit for Chris is Finland. He went there initially for 3-4 weeks as part of a graduate student exchange opportunity. This was the first time Chris felt like a real researcher. He was picked up at the airport, had an office in the department, gave a research seminar presentation, and made connections with friends and collaborators. The research was phenomenal, but he also enjoyed the Finnish saunas, the 24-hour daylight, and the beautiful ski slopes. Since that first trip, Chris has returned numerous times and has even brought his children along.

Quirky Traditions and Funny Memories (34:33)
In previous labs Chris has worked in, they had fun traditions like plays, making videos, and celebrating holidays. At his current institution, people tend to be more serious. Chris often tries to lighten the mood during his own presentations by including jokes and making them entertaining for the audience. While this can work out well, there have also been instances where his jokes definitely fell flat and no one laughed.

Advice For Us All (40:28)
Keep your weekends and your evenings. Don’t let your work slip into your personal or home life. This is something you have to constantly work on.

Guest Bio
Chris’s research focuses on memory function and dysfunction. He is interested in the ‘higher order’ contributions to memory: how we regulate and experience our memory system, how memory is used in decision making, and how it contributes to our sense of self. Most recently, Chris has been working on the infrequently studied phenomenon of déjà vu, including publishing The Cognitive Neuropsychology of Déjà Vu (Routledge) in 2017. Despite his French surname, Chris is British but lives in France with his French partner (also a neuropsychologist) and two children. Outside of memory research, Chris enjoys renovation projects, playing guitar, and teaching English.