Listen to the Episode Below (00:47:40)
Play / pause
1x
1.5x
2x
0:00
0:00
00:47:40
volume
iTunesGoogle PlayShare Leave a ReviewClammr ItListen in a New WindowDownloadSoundCloudStitcherSubscribe on AndroidSubscribe via RSS
Sign up to receive bonus content about our guests and sneak peeks for a guest from the next week’s interviews! 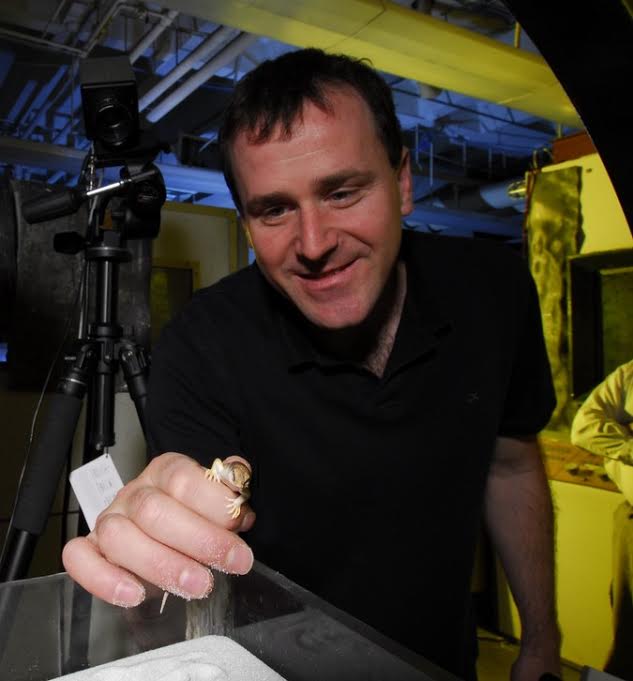 Dr. Daniel Goldman is an Associate Professor of Physics at the Georgia Institute of Technology. He received his PhD in Physics from the University of Texas, Austin and conducted postdoctoral research at the University of California, Berkeley. Dan has received many awards and honors during his career including recently being named a Georgia Power Professor of Excellence and receipt of the Presidential Early Career Award for Scientists and Engineers, a DARPA Young Faculty Award, a Sigma Xi Young Faculty award, an NSF CAREER/PECASE Award, a Georgia Tech Blanchard Milliken Fellowship, the Georgia Tech Fund for Innovation in Research and Education Award, and a Burroughs Wellcome Fund Career Award at the Scientific Interface. In addition, Dan is a Fellow of the American Physical Society. His work has also been featured by the New York Times, NPR, BBC, Discovery Channel, National Geographic, and other media sources. Dan is here with us today to tell us all about his journey through life and science.

Life Outside of Science
When he’s not doing science, Dan spends much of his time with his young daughter. One of their favorite activities lately is rocking out together with guitar duets of great classics like the Wheels on the Bus.

The Scientific Side
Dan’s lab studies how animals like lizards and snakes move around in complex natural environments. They use physics to understand movement and test their hypotheses in robotic systems with the goal of developing robots with greater abilities to navigate complex environments.

A Dose of Motivation
“Always make mistakes quickly.” by John King.
“There’s no substitute for hands-on fooling with the real stuff.” by John King

What Got You Hooked on Science?
When Dan was about 10 years old, he was really into lizards and snakes. He was certain he wanted be a herpetologist and study reptiles for his career. As a kid, Dan hung out in pet stores, had lizards as pets, studied everything he could about reptiles, and even wrote letters to textbook authors with questions about these creatures. Dan’s interests shifted towards math and physics in high school, but his work today is able to incorporate all of his academic interests.

The Low Points: Failures and Challenges
Dan did well in high school and the first few years of college, but he started to get burnt out and lose motivation. He decided to go to graduate school and was honored to be accepted into a prestigious lab. However, after a few weeks in the program, Dan decided he didn’t really want to be there and dropped out of graduate school. After a year of working odd jobs, Dan realized he wanted to go back. Though MIT allowed him to resume the program, it was a major struggle to get his former PhD advisor to let him back into the lab.

A Shining Success!
One project Dan’s lab has worked on involves the unusual movement pattern of the sidewinder rattlesnake. With a combination of experiments on real snakes moving over different terrain and robotic models of the snake’s movement, they have determined that this seemingly complex movement strategy involves coordination of a horizontal wave motion of the body coupled with a vertical plane wave motion. It was really satisfying to take a lot of complexity and successfully distill it to this relatively simple pattern.

Most Treasured Travel
Dan was able to travel to Cameroon in Africa to participate in an hands-on school set up by his PhD advisor. He and a few graduate students went for two weeks to do hands-on biomechanics experiments with the students there. All of the experiments were done on a budget that was accessible for developing countries. For example, they built a low cost force plate and taught students about ground reaction forces during running and walking.

Quirky Traditions and Funny Memories
As a graduate student Dan was the singer in a band in Austin, TX. The band included a few graduate students and one of his other friends, and they had a great time rehearsing together and playing in different venues. By inviting the large group of people in the lab, the band was able to draw a big pretty big crowd for their performances and fill some of the local bars with their supporters.

Advice For Us All
Find a good mentor.

Guest Bio
Dr. Daniel Goldman is an Associate Professor in the School of Physics at the Georgia Institute of Technology. Prof. Goldman received his B.S. in physics at the Massachusetts Institute of Technology in 1994. He received his PhD in physics in 2002 from The University of Texas at Austin where he trained under Prof. Harry Swinney in the Center for Nonlinear Dynamics. During his thesis work he studied pattern formation in oscillated granular layers and fluidization of granular beds. After a year of postdoctoral training at Texas, he moved to the University of California at Berkeley where he trained as a postdoc under Prof. Robert Full in the Poly-PEDAL lab in the Department of Integrative Biology. There he studied climbing of cockroaches and the locomotion of spiders on ground with scarce footholds. Prof. Goldman became a faculty member at Georgia Tech in January 2007. He is an adjunct member of the School of Biology and is a member of the Interdisciplinary Bioengineering Graduate Program. Prof. Goldman’s research program investigates the interaction of biological and physical systems with complex materials. For example, he is interested in how small (under 10 cm long) animals like lizards and crabs can run rapidly (over 2 m/sec) over sand, a material that can display solid and fluid-like features during foot impacts. He is interested in the biology which allows organisms to accomplish such feats, the physics which governs the forces generated by the materials during footsteps, and how to make models of the organisms like robots that have similar performance on such materials.