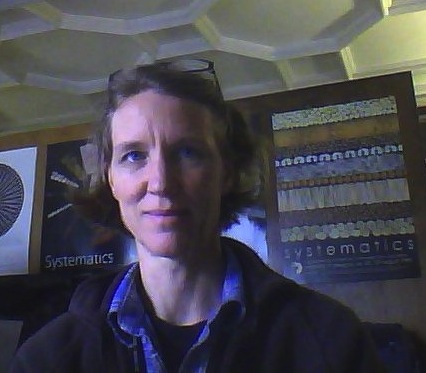 Dr. Diana Percy is a Research Entomologist at the Natural History Museum, London, UK. She received her Masters degree in Biodiversity and Taxonomy of Plants at the Royal Botanic Garden Edinburgh and the University of Edinburgh, and her PhD in Plant-Insect Interactions from the University of Glasgow. Afterward, she undertook a postdoctoral Leverhulme Trust fellowship at CSIRO, Australia, followed by a postdoctoral fellowship at the Smithsonian Institution, Washington DC. She then served as a Research Associate at the University of British Columbia before joining the research staff of the Natural History Museum. Diana is here with us today to tell us all about her journey through life and science.

Life Outside of Science
In addition to being a scientist, Diana is a bit of a musician. She plays the fiddle weekly with a group, and they experiment with various genres, enjoying the good music and great company.

The Scientific Side
Diana studies and describes insects, focusing on how to differentiate between two species and prove that two different insects diverged into different species.

A Dose of Motivation
“It is interesting to contemplate a tangled bank, clothed with many plants of many kinds, with birds singing on the bushes, with various insects flitting about, and with worms crawling through the damp earth, and to reflect that these elaborately constructed forms, so different from each other, and dependent upon each other in so complex a manner, have all been produced by laws acting around us.” – Charles Darwin in On the Origins of Species

What Got You Hooked on Science?
Diana had a convoluted path, and actually started off wanting to be an artist. She went to college for art, and started her career in science later through volunteering in surveys of plants and animals in the Middle East and Jordan. Her experiences there convinced her to redirect her career path to science.

The Low Points: Failures and Challenges
After Diana got her PhD, she moved to Australia for a postdoctoral position. Unfortunately, her partner got a position in Canada. After a few failed Canadian job applications, Diana had a difficult decision to make. She left her job in Australia, moved to Canada, and continued to struggle to find a job there. Don’t worry, this story has a happy ending, and she was eventually able to get something lined up nearby in the U.S.

A Shining Success!
We were impressed to hear that one of Diana’s colleagues from her days in Australia named a species after her! Never mind that it is (as she describes it) a small, ugly, insignificant, little insect. Still a definite claim to fame!

Most Treasured Travel
One of the most memorable places Diana has visited were the Marquesas Islands, a French Polynesian island archipelago. She was there to collect insect specimens, and the sense of isolation was powerful. She found it wonderful to see people happily living on these small, secluded islands, so far away from the rest of the world.

Quirky Traditions and Funny Memories
In her postoctoral lab, having fun with fridge magnets was a common way to pass the time. In particular, they had a set of underwear magnets that they would put on people’s photos, and this was a good way to level the playing field and have a good laugh.

Advice For Us All
If at first you don’t succeed, try and try again. There is no alternative to persistence.

Guest Bio
Diana is interested in species diversity and the evolutionary patterns and processes involved in insect-plant interactions. Her research reflects her interest in the dynamics of these interactions, and the radiation and patterns of diversity on islands. In combination, the biogeographic patterns of speciation on islands and the ecological analysis of interacting groups has proven to be an exciting means of studying evolution and natural selection within a systematics and phylogenetic framework. Diana’s research approach is to work from the ground up, usually starting with a taxonomic and systematic review of species delimitations and then use phylogenetic analyses with temporal and spatial components to understand the system from both the plant and insect perspective. She has recently started to investigate the developmental and regulatory networks underpinning variation in insect gall types. The goal is to understand the evolution of the “extended phenotype” representing shifts in galling biology accompanying speciation in plant-insect associations.