Listen to the Episode Below (00:37:17)
Play / pause
1x
1.5x
2x
0:00
0:00
00:37:17
volume
iTunesGoogle PlayShare Leave a ReviewClammr ItListen in a New WindowDownloadSoundCloudStitcherSubscribe on AndroidSubscribe via RSS
Sign up to receive bonus content about our guests and sneak peeks for a guest from the next week’s interviews! 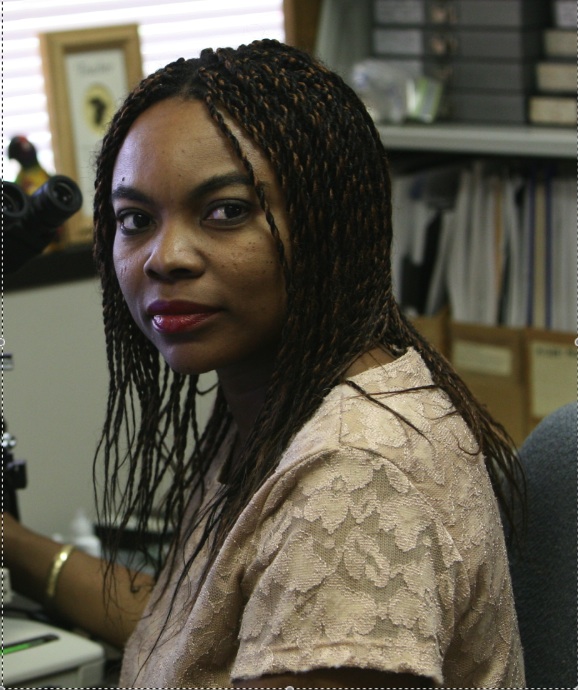 Dr. Francisca Ikuenobe is a Professor of Geology and Geophysics at the Missouri University of Science and Technology. She received her B.Sc. in Geology from the University of Ife in Nigeria (now Obafemi Awolowo University). Afterwards, Francisca worked as a production geologist and subsequently a palynologist for Shell Petroleum Development Company for a year before enrolling in graduate school. She received her M.Sc. in applied geology also from the University of Ife where she next worked as an assistant lecturer. Francisca was awarded a Commonwealth Scholarship Commission Award for her Ph.D. work in Geology at Cambridge University. Following the completion of her Ph.D., Francisca joined the faculty at Missouri S&T where she is today. Francisca has received various awards and honors for her work, including being named an Honorary Global Counselor by Missouri S&T’s Office of International and Cultural Affairs, an elected fellow of the American Association for the Advancement of Science, an African Scientific Institute Fellow, an elected fellow of the Geological Society of America, as well as receipt of the Distinguished Service Award from Goretti Old Girls International, Inc. and receipt of the Science and Technology Award from the Nigerian People’s Forum. In addition, Francisca has been awarded the Outstanding Teaching Award, Outstanding Students Leaders’ Outstanding Student Advocate Award, the Faculty Excellence Award, Sustained Excellence in Teaching Award, and the Woman of the Year Award all from Missouri S&T. Francisca joined us for an interview to talk about some of her experiences in life and science.

The Scientific Side (4:23)
In her research, Franca studies rocks to understand the clues they can reveal about the living things, environments, and climates of the past. Franca is particularly interested in the microfossils of pollen, spores, and phytoplankton that are preserved in rock. She uses these to help determine the age of rocks and what they can tell us about the history of an area.

A Dose of Motivation (6:18)
“Life is what happens to you as you are busy planning it.”
“Expecting life to treat you well because you are a good person is like expecting an angry bull not to charge because you are a vegetarian.” -Shari Barr

What Got You Hooked on Science? (10:53)
Though Franca’s mother wasn’t able to undergo any formal education where her family lived in Nigeria, she was dedicated to ensuring Fraca would. In school, Franca excelled in biology, but she also loved the humanities. Ultimately, her interests in geography, biology, math, and chemistry steered Franca towards a career in geology. In college, one of Franca’s professors introduced her to palynology, which was a relatively new subdiscipline of geology that examined dust, including pollen grains and spores. A professor at her university had expertise in this area, and Franca conducted undergraduate research in his laboratory. After completing college, Franca worked as a scientist in the corporate world before returning to school for a graduate degree. A job offer for a faculty position at Missouri S&T arrived while Franca was in the midst of her PhD, and she scrambled to finish her dissertation before she was supposed to begin teaching there.

The Low Points: Failures and Challenges (18:31)
The first time Franca was considered for promotion to full professor, she wasn’t successful. This was the first time in her life that she had a really major failure. It was a deeply personal and painful experience because Franca felt like she was told she wasn’t good enough. Franca met with the Chancellor for an hour, and she received helpful feedback to prepare her for the second opportunity two years later. The second attempt was a success! Some of the major lessons she learned were how to listen, how to say “no” to some of the opportunities she was given, to devote more time to herself and her research, and to shut out distractions to focus on her goal of being promoted.

A Shining Success! (21:18)
Becoming an elected Fellow of the American Association for the Advancement of Science (AAAS) has been a particularly meaningful success. This honor not only recognized Franca’s career achievements, but it also highlighted her role as a mentor for students. To have an impact on the lives of students is so rewarding. However, you don’t always know you’ve made a difference right away because the students you work with leave to pursue the next stage of their careers. It’s only when you run into them 5-10 years later that you realize how much you’ve helped them.

Most Treasured Travel (23:35)
Franca first traveled to Western Australia in 2005 to collaborate with three brilliant female scientists from diverse backgrounds to study the waters, sediment, and microbial life in salt lakes. They planned to use their data as an analog for the conditions and life on the planet Mars. The results of the study were fascinating! There were remarkable similarities between sediments in these salt lakes and those from the Opportunity rover sent to Mars. As a result, they were successful in receiving additional funding to return to Australia to conduct further research. Their findings were displayed in an exhibit at the Saint Louis Science Center for six years, and it is now a permanent exhibit at Missouri S&T. In addition to Western Australia, Franca has traveled several times to South Africa, and it is her favorite place in the world. On her first trip to South Africa, she witnessed the end of the Apartheid there, and it was a remarkable cultural moment. Franca also taught and did research there for a month as part of the University of Missouri South African exchange program, and she is still involved in this program.

Quirky Traditions and Funny Memories (29:00)
Geologists spend a fair amount of time doing field research which means you are living in close quarters with colleagues for weeks, so a lot of funny things happen. For one project early in her career, Franca spent eight weeks in the middle of the Atlantic Ocean on a drillship off the coast of Ghana. Her goal was to better understand how the Atlantic Ocean formed. They drilled 1 km below the sea floor and discovered lake sediments. This suggests the Atlantic Ocean began as a lake that gradually spread apart. The project was interesting, but eight weeks is a long time to be in an isolated location with a hundred other scientists, drillers, and ship staff from across the world. There wasn’t much to do for fun when they weren’t working their 12-hour shifts, but they would sit on the deck watching whales and everyone would gather to wave at the occasional ships that passed. Franca learned a lot about herself, grew as a person, and was exposed to wonderful collaboration opportunities on this trip.

Advice For Us All (34:58)
Be true to yourself, and ask for help when you need help. Asking for help is not a sign of weakness. Instead, it is a chance for you to learn and advance. Also, be proud of every contribution you make in life, whether it is in your science, relationships, or other aspects of your life. Do not allow others to define your success.

Guest Bio
Franca uses her training in sedimentology to conduct research in palynology, a sub-discipline of paleontology that uses organic-walled microfossils such as pollen, spores, dinoflagellates, and acritarchs preserved in sediments and sedimentary rocks to unravel the history of the Earth. These microfossils can provide information about the relative age and prevailing climatic conditions when a particular sedimentary sequence was deposited. She also integrates particulate organic matter components with the physical and geochemical characteristics of sediments and rocks to reconstruct depositional environments. Although majority of her research projects have focused on the past 120 million years, she has studied rocks as old as 500 million years. She has conducted research in Africa (Niger Delta, offshore Côte d’Ivoire-Ghana, Cape Basin, Egypt, Ethiopia), the United States (Missouri, Florida, Gulf Coast, Western Interior Basin), South America (Brazil, Colombia, Venezuela), and Australia. Franca also loves traveling with her family.