Listen to the Episode Below (00:41:35)
Play / pause
1x
1.5x
2x
0:00
0:00
00:41:35
volume
iTunesGoogle PlayShare Leave a ReviewClammr ItListen in a New WindowDownloadSoundCloudStitcherSubscribe on AndroidSubscribe via RSS
Sign up to receive bonus content about our guests and sneak peeks for a guest from the next week’s interviews! 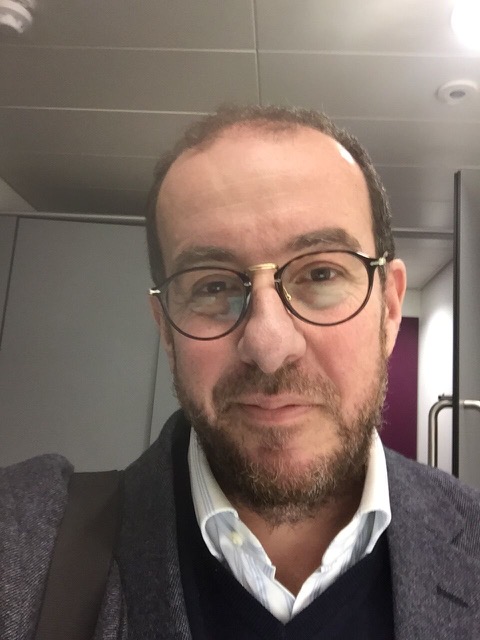 Dr. Fulvio D’Acquisto is Professor of Immunology and Director of the Health Science Research Centre at the University of Roehampton in London. Fulvio attended the University of Naples “Federico II” in Italy where he earned a Bachelor of Science degree in Pharmaceutical Chemistry, a Master of Research degree in Experimental Pharmacology, and a Ph.D. in Experimental Pharmacology. After completing his Ph.D., Fulvio conducted postdoctoral research in molecular immunology at Yale University and subsequently conducted research at the William Harvey Research Institute of Queen Mary University of London. Fulvio was awarded a Medical Research Council New Investigator Award in 2004. Prior to joining the faculty at the University of Roehampton where he is today, Fulvio served on the faculty at Queen Mary University of London. While there, he earned a Master of Art degree in Counselling and Psychotherapy from the University of Northampton. In our interview, Fulvio shared more about his life and science.

Life Outside of Science (2:25)
Fulvio is fascinated by psychology, psychotherapy, archetypes, and personality types. He enjoys reading and attending presentations on these subjects when he’s not working in the lab. In addition, Fulvio likes drawing to relax and explore his own creative imagination process.

The Scientific Side (4:52)
Through his research, Fulvio seeks to understand how emotion and lifestyle influence our immune response. He is investigating how different types of emotions (both positive and negative) affect our immune systems at the level of individual cell types and cellular responses. Fulvio’s hypothesis is that each emotion has a particular signature effect on a person’s immune system.

A Dose of Motivation (6:37)
“I’m not my job.”
“I don’t need to impress you.”
“Keep strong, keep trying, and finally you will get where you want and conquer it.” (translation) – Mussolini
“Whoever loves will be well. May someone die if they don’t know how to love, and may someone die twice if they don’t want to love.”

What Got You Hooked on Science? (10:56)
Fulvio is the youngest of four children in his family. His father was a pharmacist, and his siblings pursued careers in surgery, engineering, and science. He wanted a job that could bridge laboratory and medical fields, so he majored in pharmaceutical chemistry in college. Initially, Fulvio was interested in pharmacology and inflammation. In particular, he was captivated by glucocorticoids, which are involved in inflammation and wound healing. Over the years, he has merged his initial training in pharmacology with immunology and also psychotherapy to create a unique research niche called affective immunology.

The Low Points: Failures and Challenges (25:28)
Fulvio shares both a personal and a professional challenge that he experienced in his career. On a personal note, his lab is based in the United Kingdom, but his family lives in Italy. Being so far away from his family is a sacrifice. It was really hard for him a few years ago when his mother passed away, and he couldn’t be there when she died. An example of a professional challenge was when he and his lab were trying to understand the role of consciousness in inflammation. They conducted an experiment where they examined the immune response of mice in response to the scent of a predator when the mice were sleeping versus awake. The responses differed based on the animals’ state of consciousness, but it was difficult to explain and translate the findings of this experiment in the context of the real world. There were many questions about whether humans also have unconscious fears and whether laboratory-raised mice could recognize and respond to a stimulus related to a danger they never experienced.

A Shining Success! (28:40)
One of the exciting discoveries from Fulvio’s lab occurred when they identified a molecule produced by immune cells that affects anxiety and obsessive compulsive behavior. This molecule demonstrated that feeding behaviors and emotions could be regulated by peripheral factors, such as blood cells and immune cells, not just the brain. When cells from a mouse with anxious behavior were transplanted into a mouse that did not display anxious behavior, the latter mouse became as anxious as the cell donor mouse. Transferring immune cells resulted in transfer of emotion-related behavior. They concluded that immune cells must carry some kind of behavioral modulator. In addition, Fulvio and his colleagues have recently discovered that the immune response for different emotions are different in terms signalling molecules and affected cell types. This was a fascinating finding, but there is still a lot of work to be done in this area.

Most Treasured Travel (34:27)
The opportunities to travel for different positions throughout his career have been amazing for Fulvio. He began his training in Italy, and has since enjoyed working in Canada, Japan, the United States, and the United Kingdom. Working in Japan was a phenomenal experience. His boss there was an inspirational scientist and person. In his last few weeks there, Fulvio was scrambling to get projects finished up in the lab. He remembers his boss sitting with him in the lab late at night playing guitar and singing Mariah Carey Songs. These are memories he will never forget.

Quirky Traditions and Funny Memories (35:50)
Fulvio has a sense of humor and likes to have fun with his colleagues. Right before this interview, he was at a local shop buying snacks, and he discovered a box of biscuits with a name very similar to his postdoc’s name. He had to buy them. Once he got back to the lab, he changed the first letter on the box to match the postdoc’s name, and then sent the postdoc a joking message about how if you have time to be making biscuits, you should be spending it in the lab.

Advice For Us All (39:05)
Know thyself. Try to understand who you are and what you bring to science. Then try to use this for your future.

Guest Bio
Fulvio has always been fascinated by the idea that the human body produces its own immunomodulatory molecules. His research on an immune-related protein Annexin-A1 is now being translated into a possible new treatment for autoimmune diseases. Fulvio’s current research focuses on understanding the link between emotions, immunity, and inflammation. This area of research has recently gained substantial attention in the field of psychoneuroimmunology, and Fulvio has named this field Affective Immunology. Fulvio’s overall aim is to demonstrate the therapeutic potential of emotion-affecting immunomodulatory therapies and to establish this new field of research through teaching and mentoring. He is doing this using interdisciplinary approaches that combine disciplines such as neuroscience, performing arts and drama, psychology, immunology, pharmacology, and design. His hope and ambition are that the results of this project will constitute an example of ‘paradigm shift’ in translational research where ‘body and mind’ are taken together into consideration to achieve a better and patient-tailored treatment.