Listen to the Episode Below (00:29:33)
Play / pause
1x
1.5x
2x
0:00
0:00
00:29:33
volume
iTunesGoogle PlayShare Leave a ReviewClammr ItListen in a New WindowDownloadSoundCloudStitcherSubscribe on AndroidSubscribe via RSS
Sign up to receive bonus content about our guests and sneak peeks for a guest from the next week’s interviews! 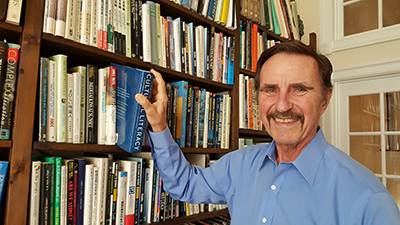 Dr. Jim Trefil is the Robinson Professor of Physics at George Mason University. He received his PhD in Physics from Stanford University. Postdoc at CERN in Geneva and at MIT. Jim served on the faculty at the University of Illinois and the University of Virginia before joining the faculty at George Mason University where he is today. Jim is a Fellow of the American Physical Society, the American Association for the Advancement of Science, and the World Economic Forum. He is also the recipient of a Guggenheim Fellowship, the Science Writing Award and Andrew W. Germant Award from the American Institute of Physics, as well as the Westinghouse and Subaru Awards from the American Association for the Advancement of Science. He has authored numerous books for scientists and general audiences alike, including very recently the book Exoplanets: Diamond Worlds, Super Earths, Pulsar Planets, and the New Search for Life Beyond Our Solar System with co-author Dr. Mike Summers. Jim has joined us today to talk about his experiences in life and science.

Life Outside of Science (2:48)
Jim spends his spare time working out at the gym, watching TV while pedaling away on a stationary bicycle, and singing in his church choir. He was a folk singer in his younger years and has recently gotten back into singing.

The Scientific Side (3:40)
Jim has conducted research in the realm of theoretical particle physics, but his primary interest lately has been scientific literacy. Many of the issues people face in the world today have a scientific component, and a basic understanding of the relevant science is critical to really understanding these issues. To address this knowledge gap, Jim is dedicated to explaining science to people who aren’t scientists. He does this to a large extent through writing books and articles for general audiences. Much of Jim’s current work also centers around teaching science to undergraduate students at George Mason University.

A Dose of Motivation (4:25)
Jim is motivated by the process of organizing complex thoughts, ideas, and scientific concepts in a way that makes it easier for others to understand them.

What Got You Hooked on Science? (6:49)
During his childhood, Jim and his friends often visited the Field Museum and the Adler Planetarium where they lived in Chicago. They were fascinated by wonders of the scientific world they were exposed to there. Jim’s interest in science kept growing as he learned more. One day in high school chemistry, Jim’s teacher told him that he was talented in science and he should consider becoming a scientist. This possibility had never occurred to Jim before. Jim entered college planning to major in chemistry, but quickly switched to physics once he realized that this was where the answers to his most pressing questions could be found.

The Low Points: Failures and Challenges (17:30)
During Jim’s time as a faculty member at the University of Virginia, he and a student wrote a paper together where they proved with impeccable logic and mathematics that a particular isotope of plutonium could not exist in the real world. About one month after this paper was published, researchers discovered their proclaimed impossible isotope embedded in ice in Antarctica. When Jim and his student went back through their logic, they discovered that one of the assumptions they made at the very beginning wasn’t true. These kinds of failures are part of science, and they highlight the need for open-mindedness and scientific humility.

A Shining Success! (18:35)
When Jim was conducting research in elementary particle physics, he realized that cosmic rays could potentially be a powerful high-energy tool researchers could use to better understand characteristics of elementary particles. Particle accelerators are often used for this purpose, but accelerators can only leverage a limited amount of energy to probe elementary particles. Cosmic rays are abundant in our atmosphere, and they contain more energy than the largest particle accelerators we can currently build. During a conference Jim was attending, one of the speakers acknowledged Jim’s outstanding advance in the data he could generate with cosmic rays, and this was a really proud moment for Jim.

Book Recommendations (21:02)
Crocodile on the Sandbank by Elizabeth Peters

Most Treasured Travel (22:22)
Jim was working as a postdoc at MIT at the same time that the experimental physicist Sam Ting was there. Sam was working on experiments all over the word, and he later went on to win a Nobel Prize for his research. One of Sam’s projects at the time was being conducted in Hamburg, Germany, and Jim was delighted to be invited to join the research group there for an extended time. Jim remembers the food in Hamburg fondly in general, but he particularly enjoyed the giant heaps of mashed potatoes bestowed upon him by the cafeteria workers. His family was able to join him in Hamburg over the summer, and Jim had a fantastic time getting to know the city.

Quirky Traditions and Funny Memories (23:59)
When Jim was at MIT, they would hold brown bag lunch events in this conference room with a big long table. He recalls a few striking interactions with renowned physicists like Steve Weinberg who later went on to become a Nobel Laureate. These were just normal people who happened to be really good at something. Jim also recounts the time he visited Cornell University as a young scientist to give a presentation about his work. A number of senior scientists including the renowned physicist Hans Bethe sat in the very front row. As Jim began to speak, Hans promptly fell asleep. He slept through Jim’s entire presentation, woke up at the very end, and then asked the best question of the whole session.

Advice For Us All (27:32)
Success comes not by wishing, but by hard work bravely done. When it comes to choosing a career, just be who you are. If you want to be a scientist, you should do it. However, if you want to be something else, do that. You should pursue what makes you happy.

Guest Bio
Jim grew up in Chicago, Illinois and hadn’t considered a career in science until a fateful conversation with his high school chemistry teacher. He has been dedicated to conducting research, teaching, and scientific writing ever since. Over the years, Jim’s research in theoretical physics has focused on elementary particle physics. His recent efforts have emphasized teaching at George Mason University and also promoting science literacy in the general public. Jim is the author of more than 50 books and 100 articles in professional journals. Many of Jim’s books are written for a general audience to inform nonscientists about various exciting topics in science.