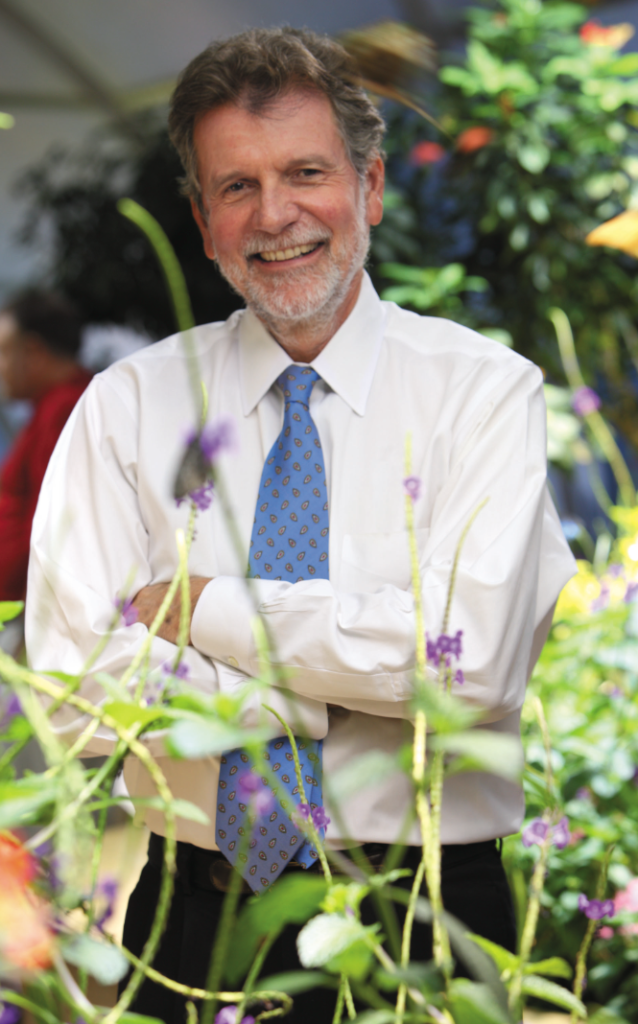 Dr. John Kress is a Distinguished Scientist and Curator of Botany at the Smithsonian’s National Museum of Natural History. John received his B.A. in biology from Harvard University and his Ph.D. in botany from Duke University. John formerly served as the Interim Undersecretary for Science for the Smithsonian Institution, Executive Director of the Association for Tropical Biology and Conservation, and Director of the Consortium for Understanding and Sustaining a Biodiverse Planet, which is one of the four grand challenges of the Smithsonian Institution’s strategic plan. He is also Chairman of the Board of the Organization for Tropical Studies (OTS) and an Affiliate Faculty member at George Mason University. He has previously served as an Adjunct Professor at George Washington University and the Chinese Academy of Sciences. Among John’s awards and honors are receipt of the Parker-Gentry Award for Biodiversity and Conservation from the Field Museum of Natural History, the Lifetime Achievement Award from Heliconia Society International, and the Edward O. Wilson Biodiversity Technology Pioneer Award for Co-Development of Leafsnap – the First Mobile App for Plant Identification. John is a fellow of the American Association for the Advancement of Science and an honorary Fellow of the Association for Tropical Biology and Conservation. He joined us in this interview to discuss his experiences in life and science.

Life Outside of Science (3:19)
Not only does John enjoy investigating the natural world at work, he also enjoys spending his free time outside exploring nature. John often goes on walks or hikes with his wife and dog to see nature in action. In addition, John is an avid gardener. Among the plants he cultivates in his own yard are some of the ginger and banana plants that he studies.

The Scientific Side (4:38)
John’s research involves exploring the natural world and all the organisms that make up the natural world. Since graduate school, he has been exploring different areas, particularly tropical areas, to determine what grows there now, what grew there in the past, and how the plants and animals there interact.

What Got You Hooked on Science? (8:11)
John began acting in high school and was convinced this was what he wanted to do for his career. When John enrolled in college, he aspired to become a dramatic actor. Once in college though, John quickly realized the theater was not for him. He was attracted to biology and botany because the subject matter was more tangible and there was so much to learn. At Harvard, John crossed paths with influential mentors in biology who inspired him, and he continued along the academic path to his position today.

The Low Points: Failures and Challenges (15:05)
Developing colleagues in a new country is a big challenge, and John has done a lot of international field work to study plants in different regions. The country of Myanmar had been isolated from Western scientists for so long that it was difficult to find research partners and get permission to conduct research there. He spent days and weeks in the capital city of Yangon (formerly Rangoon) trying to connect with the right people to make his research possible. John and his colleagues nearly gave up because it took long, and they didn’t seem to be making progress. They were eventually successful, but they had to spend a lot of time up front getting to know people, talking to people, learning about their experiences, and building trust.

A Shining Success! (18:51)
The Smithsonian Institution usually maintains a neutral stance on controversial issues. However, as a scientific and knowledge-based institution, John thought it was really important that they make a bold statement about climate change. After conversations with the Secretary of the Institution and other key stakeholders, John was able to convince them of the importance of such a statement. He helped gather pieces of evidence from scientists from various fields, and the Smithsonian’s statement on climate change was effectively published.

Book Recommendations (23:18)
Living in the Anthropocene: Earth in the Age of Humans edited by John Kress and Jeffrey Stine, The Wild Places by Robert Macfarlane, Natural History of Trees by Donald Peattie

Most Treasured Travel (26:28)
John’s favorite places include the Amazon rainforest and the Andes Mountains in South America. He has enjoyed traveling up the Amazon and Rio Negro Rivers for hours, completely enveloped by lush forests. John has also spent weeks exploring the Andes, particularly in Columbia. During these trips, he has discovered new species of plants, visited small villages, met wonderful people, and studied fascinating plants.

Quirky Traditions and Funny Memories (28:54)
A number of years ago, John was working at a field station with a taxonomist who collected poisonous snakes to study. One night, John heard that the taxonomist was planning to search for snakes with a group of students, and John couldn’t resist playing a little prank. Before dinner, John snuck out and hid a six foot long inflatable snake in the bushes along the main trail. The prank snake was found and had its intended effect.

Advice For Us All (34:51)
Get to know nature and biodiversity while you can. Never take it for granted that the species and habitats present today will be there tomorrow. The life on Earth is what makes our planet unique, so it is important to see and understand the living things that surround us. There are many problems plaguing the world today, but it is not hopeless. We can still fix some of the major problems of the planet if we act quickly.

Guest Bio
John studies the biology, reproduction, evolution, genetic diversity, and conservation of tropical and temperate plants, including heliconia and other Zingiberales (a type of flowering plant including gingers and bananas). In addition to his research with the Smithsonian, John is the author of multiple popular science books including Plant Conservation – A Natural History Approach, The Weeping Goldsmith – Discoveries in the Secret Land of Myanmar, The Ornaments of Life – Coevolution and Conservation in the Tropics, DNA Barcodes – Methods and Protocols, and, most recently, Editor of the book Living in the Anthropocene – Earth in the Age of Humans.