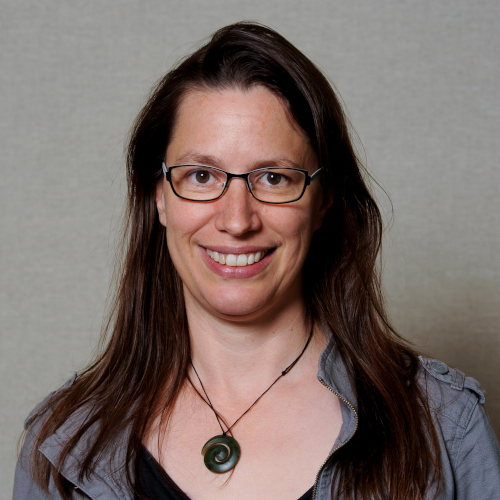 Dr. Karen Daniels is a Professor in the Department of Physics at North Carolina State University. She received her BA in physics from Dartmouth College. Karen then worked for about three years as a science teacher at Saint Ann’s School in Brooklyn before enrolling in graduate school at Cornell University where she earned her PhD in physics. She then conducted postdoctoral research at Duke University before joining the faculty at NCSU in 2005. Karen has been awarded a fellowship from the Alexander von Humboldt Foundation to support a yearlong sabbatical at the Max Planck Institute for Dynamics and Self-Organization in Göttingen, Germany. In addition, Karen was the recipient of a National Science Foundation Early Career Development (CAREER) Award, the Equity for Women Award from NCSU, and the LeRoy and Elva Martin Award for Teaching Excellence. She has also been named a Fellow of the American Physical Society.

Life Outside of Science (2:27)
Travel is a passion for Karen. While traveling, she loves hiking on mountain trails, eating delicious food, discovering new foods that she can try to make at home, reading books, knitting, and interacting with new people and places.

The Scientific Side (5:45)
Karen’s lab investigates the physics of how materials change state (e.g. from solid to fluid), how they deform, and how they may ultimately fail. She studies these questions across a variety of length and time scales, from microscopic phenomena that occur in less than a second to shifts in land that occur on geologic timescales and may lead to landslides.

A Dose of Motivation (7:38)
“If your dreams do not scare you, they are not big enough.” – Ellen Johnson Sirleaf

What Got You Hooked on Science? (11:59)
Growing up with parents and relatives working in STEM fields, Karen always knew what science and doing lab work were like. She had a fantastic opportunity early on to participate in a science program for young students at the Brooklyn Botanic Garden. In the program, Karen learned how to do experiments and keep a lab notebook. She and a friend had fun doing experiments on Venus flytraps, and Karen felt like she was doing real science. Karen’s dad worked for IBM, and she started learning computer programming on the family computer when she was in grade school. By middle school, she became more interested in her uncle’s microbiology research. Karen started an experiment at school with bacteria and agar plates, but the awful smell of the bacteria led her to end the experiment early. Her interests in physics were piqued in high school when Stephen Hawking’s book A Brief History of Time came out. With her interests in science and math, Karen decided to pursue engineering in college. She started by taking a few physics classes, and she ended up enjoying physics so much that she never made it over to the engineering department. In college, Karen worked on a variety of interesting research projects, but she didn’t know what she wanted to do when she graduated. One of her older friends had recently found a great job teaching after having a bad experience and leaving graduate school. Karen decided to become a science teacher. After teaching for a few years, Karen realized she wanted to try graduate school because there were so many questions that students asked that she couldn’t answer.

The Low Points: Failures and Challenges (22:37)
The first year of graduate school was really hard for Karen. As a graduate student, you are asked to solve more difficult mathematical problems than you have ever tried to solve before, and there is a lot at stake. One of her assigned faculty mentors was Professor David Lee, who had recently been awarded the Nobel Prize in Physics. He saw her walking down the hallway one day looking absolutely terrible. When he asked how things were going, she answered honestly that they weren’t going well. She was staying up late to do problem sets, struggling to get through them, and she was really concerned that taking three years off to teach resulted in her forgetting how to do higher level math. Karen wasn’t sure she was going to be able to make it through graduate school. He told her that he knew exactly what she meant. He had taken time away from his early academic career to fight in the U.S. Armed Forces. When he came back after serving his country, he had the exact same feeling. For Karen, hearing this meant a lot. It convinced her that even though things were hard, they were not impossible.

A Shining Success! (26:39)
Some of Karen’s favorite successes are the small wins you experience when you are working on a tough problem, and you finally figure out a solution. For example, Karen had been struggling with a difficult theoretical problem for a while. While she was practicing cello with her community orchestra, she had an ah-ha moment where she figured out the answer. During a long rest in the piece of music they were playing, Karen frantically scribbled her notes down on a piece of sheet music so she wouldn’t forget. Recently, she and a graduate student had spent over a year trying to make sense of the results from his experiments. The line on the graph had the opposite sign of what they were expecting, and they couldn’t figure out why. They checked the data analysis, the computer code, and everything else they could think of. After putting the project aside for a while, they discovered the explanation. The gel they were using swelled in a particular fluid, and this expansion of the material masked the effect they were looking for. It was really rewarding when they finally figured it out.

Most Treasured Travel (28:53)
Karen had an amazing experience working on a project at the Max Planck Institute for Dynamics and Self-Organization in Göttingen, Germany on a year-long sabbatical. The city is steeped in scientific history, and it was phenomenal to walk in the footsteps of so many famous scientists who had been there. In addition, numerous high speed rail lines crossed in the center of Germany, so Karen and her husband were able to take a lot of weekend trips to see sights across Europe. The science was great, and the people were also remarkable. While talking about life and culture with her colleagues one day, the discussion turned to a particular German cheese that is created by immersing cheese in a wooden box full of flour and mites. While it was fascinating to learn about how the mites dry and preserve the cheese, Karen was also captivated by the fact that the mix of flour, cheese, and mites flowed like a fluid. She had to see it. Karen went on a road trip across Germany with a group of four other scientists to witness the spectacle in person. They explored the cheese museum, sampled the cheese, and examined the fluid properties of the material. This science-inspired road trip led Karen and her colleagues to write up a scientific paper describing how small mites wiggling around in a bed of grain can fluidize the material.

Quirky Traditions and Funny Memories (33:30)
In Germany, there is a tradition where a person’s lab decorates their doctoral hat with things that represent their PhD. This hat is then presented to the new PhD to wear to the graduation ceremonies. Karen’s PhD advisor had received his PhD in Germany, and he brought this tradition to his lab. Karen and her labmates had fun decorating each other’s hats, and they thought they did a pretty impressive job on each hat. However, when Karen went to Göttingen, she saw how truly intricate and complex this hat decorating tradition could be. In some cases, students wore miniaturized working versions of a lab apparatus on their heads. These included pumps, lasers, and other complex instrumentation. Many of the hats had to be mounted on bike helmets so they could be supported and strapped on to the wearer’s head. This tradition is a fun way to bring creativity into celebrating all the hard work that goes into earning a PhD. In Karen’s current lab, they have a tradition of decorating a tunnel on campus called the Free Expression Tunnel. Graffiti is welcome on this structure, and they have fun painting a version of a student’s PhD experiments on the tunnel at the end of their PhD to celebrate.

Advice For Us All (37:36)
Try to think about the map of where you’ve been and where you’re going. Chart out a path to get you to your goal, but also be open to side paths that you may not even know exist right now. Some of these side paths are incredible opportunities. With a little planning, you can set yourself up for fortuitous circumstances. Also remember that you can continue being yourself while also being a successful scientist.

Guest Bio
Karen’s lab at NC State investigates a number of problems in the deformation and failure of materials, from fluid flows, to piles of sand, to fracturing gels. Her primary research areas focus on 1) modeling and analyzing forces in granular materials, 2) evaluating how networks control the properties of granular materials, 3) wetting and spreading in liquid metals and soft materials, and 4) uncovering the similarities and differences between conventional fluids, granular fluids, and active fluids. When not working with her students on experiments in the lab, she likes to spend time in the outdoors, which has led her to contemplate the implications of her research for geological and ecological systems.