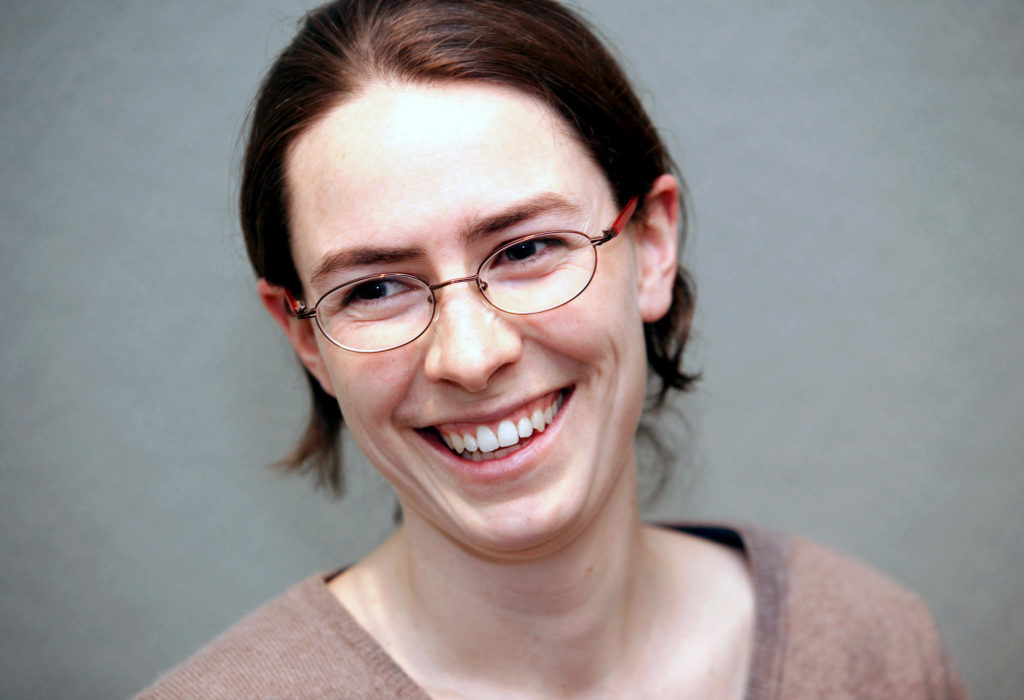 Dr. Meredith Hughes is an Associate Professor of Astronomy at Wesleyan University. She received her B.S. degree in Physics & Astronomy from Yale University. Afterwards, Meredith attended graduate school at Harvard University where she received her M.A. and Ph.D. degrees in Astronomy. She was awarded a Miller Fellowship to conduct postdoctoral research in the Department of Astronomy at the University of California, Berkeley before she joined the faculty at Wesleyan University in 2013. Meredith has received the Harvard Astronomy Department’s Fireman Fellowship for her outstanding doctoral thesis as well as Harvard Astronomy’s Bok Prize for research excellence by a Ph.D. graduate under the age of 35. In addition, she was selected as a Cottrell Scholar in 2018 by the Research Corporation for Science Advancement. In our interview, Meredith shares more about her life and science.

Life Outside of Science (2:09)
When Meredith isn’t working, you can find her hanging out with her husband, two young kids, and their dog. She also enjoys reading fantasy and sci-fi books, being outdoors, and volunteering in her community.

The Scientific Side (4:25)
In her research, Meredith uses large radio telescopes to study how planets form around other stars. After stars are formed, disks of leftover gas and dust go on to form planets. Meredith studies how this process works, the conditions that exist in these early disks, how the disks form planets, and the types of planets that form around stars. Studying this process in other star systems helps us learn more about our own solar system and how it formed.

A Dose of Motivation (6:13)
“Some people may also be intimidated by the “unknown audience” aspect of writing. A student may discuss something with me and be entirely articulate and demonstrate a complete understanding of the topic, but if I say “OK, now go write that down”, they are flummoxed. By writing it down, they are making a record of their words and thoughts in a more permanent way, and what they write might be read by other people — perhaps a group of very wise and judgmental people somewhere out there in the scientific universe. This group is in possession of a large stamp that says LOSER. If you write something less than perfect, even in a first draft, they put a giant red LOSER stamp in permanent ink next to your name and you are forever labeled as stupid. They might even write to your mother. The only one who will still think you are clever is your dog.” – FemaleScienceProfessor Blog

What Got You Hooked on Science? (10:23)
Though Meredith enjoyed math and science as a kid, she didn’t really know any scientists. She was familiar with teachers and doctors, so she initially thought she would follow one of those two career paths. However, spending six weeks at an astronomy summer science program in the summer after her junior year of high school changed everything. She was enchanted by the scientists she met and her peers in the program. They had an amazing time making their own astronomy observations to determine the orbit of an asteroid, working at telescopes at night, writing computer programs, and trying to get everything to work. This experience made Meredith realize that she could perhaps pursue a career in science. In her first year in college, Meredith took a wide variety of different courses to explore her options. She then did summer research in an astronomy lab, and this confirmed interests in astronomy and desire to do research.

The Low Points: Failures and Challenges (21:16)
One of the most difficult points in Meredith’s career occurred towards the end of graduate school. Her fear of writing made it really stressful to put together the long and daunting thesis document that was required. She was also uncertain about her future. Meredith wondered whether her dissertation was good enough for her to get a PhD, whether she was ready to move to a new lab to start her postdoctoral position, and whether she would ultimately be able to run her own independent research group afterwards. At the same time, Meredith had just broken up with her long-term boyfriend and her aunt was dying of cancer. Though many mornings during this period started with crying in her office, Meredith was able to get her thesis written, and she has gone on to have a successful and fulfilling career.

A Shining Success! (24:36)
Meredith was recently awarded a Cottrell Scholar Award, and this was a wonderful validation of both her teaching and research. The prestigious award can only be applied for one time during the third year of a faculty member’s career. However, during February of Meredith’s third year, she gave birth to her first son. The pre-proposal was due in May, and the full proposal had to be submitted by the end of June. Since their daycare only accepted children starting at four months old, Meredith stayed home with her son during those first four months. She managed to get the pre-proposal in on time and planned to work heavily on the full proposal after her son was enrolled in daycare in the week before the deadline. Unfortunately, during that week, her son got a severe ear infection and had a bad reaction to the prescribed antibiotics. Meredith resigned herself to the fact that there was no way she could get the application done in time. She mentioned this to a friend who previously won the award, and her friend pointed out that the organization offers deferrals if you are on parental leave during your year of eligibility. When Meredith wrote to them to explain her situation, they encouraged her to apply next year. The following year, everything went smoothly, and Meredith was so grateful that they had this family-friendly policy in place.

Book Recommendations (3:05)
Rise of the Rocket Girls: The Women Who Propelled Us, from Missiles to the Moon to Mars by Nathalia Holt

Most Treasured Travel (27:12)
Towards the end of her PhD, Meredith traveled to northern Chile to do observations with a radio telescope there. Her trip coincided with the early construction of the Atacama Large Millimeter/submillimeter Array (ALMA) radio telescope in the Atacama Desert. Meredith now uses ALMA to do all of her research, and the instrument has been transformational for her field. It has substantially improved both our ability to see faint objects and to see tiny details. At the time of Meredith’s visit, the team was just starting to install the antennae. She had an opportunity to visit the facility with a colleague and witness firsthand some of the issues they experienced as they got these antennae up and working for the first time. Now ALMA is an amazing resource that provides enormous amounts of remarkable data for the scientific community. Aside from seeing the ALMA facility, being in the Atacama Desert was also amazing. It is the second driest desert in the world, you can see active volcanoes on the horizon, and it is one of only a few places in the world that has wild flamingos.

Quirky Traditions and Funny Memories (32:17)
One of Meredith’s students made her a huge poster of a sloth and an astronaut standing in front of a picture of a galaxy. She keeps this poster on a wall in her office, and it makes her smile. Beyond quirky decor, Meredith has had many fun and memorable experiences at the Origins of Solar Systems Gordon Research Conference held at Mount Holyoke College in western Massachusetts. During graduate school, Meredith’s advisor was obsessed with all the fossilized dinosaur footprints you could see in western Massachusetts. Every time her advisor went to this conference, he talked about the dinosaur footprints nonstop and had to bring the group out to see them. For Meredith, this Gordon Conference will forever be associated with dinosaur footprints.

Advice For Us All (37:30)
Listen to the people in your life who are willing to dream big for you, willing to help you dream big, and telling you that you are capable of doing great things that you might not think of yourself. Balance between work and your life outside of work is important. When you’re at work, work hard. When you’re at home, give yourself an opportunity to explore other interests. Also, it is possible to have both a successful career and a family.

Guest Bio
Meredith uses giant radio telescopes to study how planets form around other stars. She looks at the disks of gas and dust around young stars and uses these disks to figure out the initial conditions, evolution, and architecture of young planetary systems. Most of her work is done with the Atacama Large Millimeter/submillimeter Array in the Atacama Desert of northern Chile, an interferometer that works by combining the light from lots of little (12-meter) telescopes to achieve the level of detail of an enormous (kilometer-size) telescope. She works as a faculty member at Wesleyan University, a liberal arts college where she enjoys teaching small classes of undergraduates and masters students, working with the Van Vleck Observatory’s outreach program, and advising the campus women in science organization. When she’s not staring into space, Meredith spends time with her family: her husband, two sons (a 3-year-old and an 8-month-old), and their dog. She also enjoys reading, being outdoors, knitting, volunteering, and eating chocolate.