Listen to the Episode Below (0:37:37)
Play / pause
1x
1.5x
2x
0:00
0:00
0:37:37
volume
iTunesGoogle PlayShare Leave a ReviewClammr ItListen in a New WindowDownloadSoundCloudStitcherSubscribe on AndroidSubscribe via RSS
Sign up to receive bonus content about our guests and sneak peeks for a guest from the next week’s interviews! 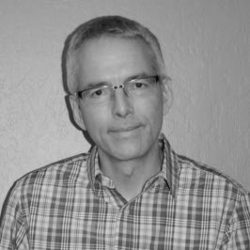 Dr. Paul Cannon is the Parkinson’s Disease Program Manager at 23andMe. Paul received his Master’s degree in Natural Sciences from Christ’s College in Cambridge and his PhD in Medical Sciences from the University of Calgary. Afterwards, he worked as a Research Scientist at Syntex. Next, Paul spent nearly 15 years in various roles at Roche Pharmaceuticals and Genentech. He worked as a Senior Consultant for Tynan Consulting for about four years before joining the team at 23andMe. In our interview, Paul tells us more about his life and science.

The Scientific Side (2:44)
Scientifically, Paul and the team at 23andMe are working with patients, genetic data, and other self-report data to understand genetic mutations that are linked to Parkinson’s disease (PD), disease risk factors, and other comorbidities experienced by people with PD.

What Got You Hooked on Science? (6:22)
In high school, Paul had two remarkable chemistry teachers that piqued his interest in science. He learned about how compounds come together and interact, and he began to think he wanted to become an inorganic chemist. This changed for Paul in college. He went to school during the birth of the age of molecular biology. Scientists were just starting to develop the tools needed to look at DNA, RNA, and proteins in ways that were never before possible. In this exciting environment, Paul decided to major in natural sciences with a focus on biochemistry. Throughout undergraduate and graduate school, he was able to work with great scientists who were applying nascent molecular biology techniques to answer interesting questions in developmental biology. After completing his PhD, Paul’s interests shifted towards genetics and applying his science in industry settings.

The Low Points: Failures and Challenges (17:31)
In one of his projects in graduate school, Paul was studying a particular protein. He purified this protein, and he was pretty sure he knew what the protein was and where it was binding. Unfortunately, his study system was a transgenic trout model system, and there weren’t any cell lines available in this system for him to do the experiments necessary to show causal relationships. This was a major setback, and Paul realized during his fourth year of graduate school that not having these tools available was going to make it really difficult to publish his work. He was ultimately able to finish his PhD without publishing his research on that project, but this experience taught him the importance of thinking through a series of experiments at the very beginning to ensure you have the means necessary to get the information you need.

A Shining Success! (19:42)
The collaborations they have established have been excellent and really beneficial for their research. In doing this kind of work, there are relatively few people with PD, and fewer of these individuals are able to or interested in participating in research. When they start separating this pool of people into different subtypes of the disease, it quickly becomes difficult to get large enough samples to do good research. To do the kind of science they want to do, working with other research groups is critical. Recently, they were able to work with collaborators to put together an interesting story about a subset of people with PD with a particular genetic mutation. Paul really appreciates their great collaborators, as well as the 23andMe customers who have contributed to science through completing a testing kit, opting to participate in research, and providing information about themselves and their health.

Book Recommendations (24:06)
Freakonomics: A Rogue Economist Explores the Hidden Side of Everything by Steven D. Levitt

Most Treasured Travel (24:58)
While Paul was working at Roche, he traveled to Buonas, Switzerland to attend a scientific meeting for Roche scientists from around the world. The village of Buonas is located on stunning Lake Zug with phenomenal views of the mountains. There is a beautiful conference center where Paul and his colleagues gathered to talk about the work they were doing on different projects within the company. This was one of the few venues where they could all talk openly about their research since all of the attendees worked for Roche. The setting was spectacular, and it was exciting to be able to share information and ideas freely with the other researchers there. After one of these meetings, Paul did a two week driving and hiking tour through Switzerland, Northern Italy, and Austria.

Quirky Traditions and Funny Memories (27:52)
Paul and his fellow graduate students had a graduate student show every year at the University of Calgary. This involved putting together funny skits, dressing up, and performing for fellow students. It was a lot of fun. Currently, 23andMe has a big annual fundraiser for The Parkinson’s Foundation. This event brings everyone in their group together through different events like a bake sale, a walk, and other activities.

Advice For Us All (35:23)
Be clear about decision-making, both for yourself and others. Understand what decisions you’re trying to make, but also make sure to think about what information others need from you to make decisions. Don’t overwhelm people with unnecessary details. Understand the key elements that are needed for each audience you encounter. Also, find mentors for yourself, and be a mentor to others.

Guest Bio
Paul’s research is focused on how we can better understand the genetics of Parkinson’s Disease (PD), and hopefully, one day, move towards ways we might be able to prevent the condition from occurring in the first place. At 23andMe, he’s helped spearhead a number of collaborations with other researchers and organizations working on PD. He knows PD research needs more data, and working with others in the field to pool our collective knowledge can help drive significant advances in the field. While his career has taken several twists and turns, Paul has always been focused on making smart, strategic decisions about science. In fact, he’s appropriated Nike’s motto of “just do it!” and tries to steer himself and others into action-oriented solutions. Outside of work, he loves traveling and being active. His latest journey took him on a cycling tour of the Danube through Hungary, Slovakia and Austria!