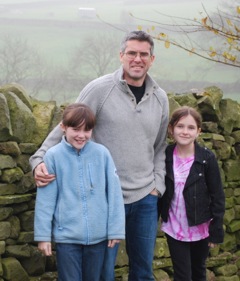 Dr. Richard Hardy is a Professor of Biology and Associate Chair of Teaching at Indiana University, Bloomington. He received his PhD from the University of Alabama at Birmingham and completed a postdoctoral fellowship at Washington University in St. Louis before joining the faculty at Indiana University. Richard has received a number of awards and honors during his career, including the Indiana University Trustees’ Teaching Award three times. Richard is here with us today to tell us all about his journey through life and science.

Richard was born and raised in a small village in North Yorkshire, England, and received his bachelors degree in Genetics from the University of Newcastle-upon-Tyne. In 1991 he moved to Birmingham, Alabama to pursue a Ph.D. in the lab of Dr. Gail Wertz at UAB. It was there that Richard met his wife, Gail (different Gail!), who was a graduate student in the same program. They were married in 1993. After obtaining his doctorate, Richard moved on to post-doc in St. Louis at Washington University in the lab of Dr. Charles Rice working on alphavirus replication. In 2002, he moved to Indiana University with his wife Gail and their two young daughters, to take a faculty position in the Biology Department. Richard’s research focuses on the interaction between alphaviruses and the mosquito host responsible for virus transmission to vertebrates. In addition to running a research program he is also the Associate Chair for Teaching and Director of Undergraduate Studies in the department. During his time at IU, Richard has taught a number of different undergraduate classes related to viruses and infectious disease. He finds this to be tremendously rewarding. Outside of work, he spends a great deal of time with his family transporting his daughters (now 12 and 13) to and from various extracurricular activities. As a consequence, he has become a big fan of gymnastics and soccer! Richard is a runner, avid reader, and loves fishing when he gets the chance.