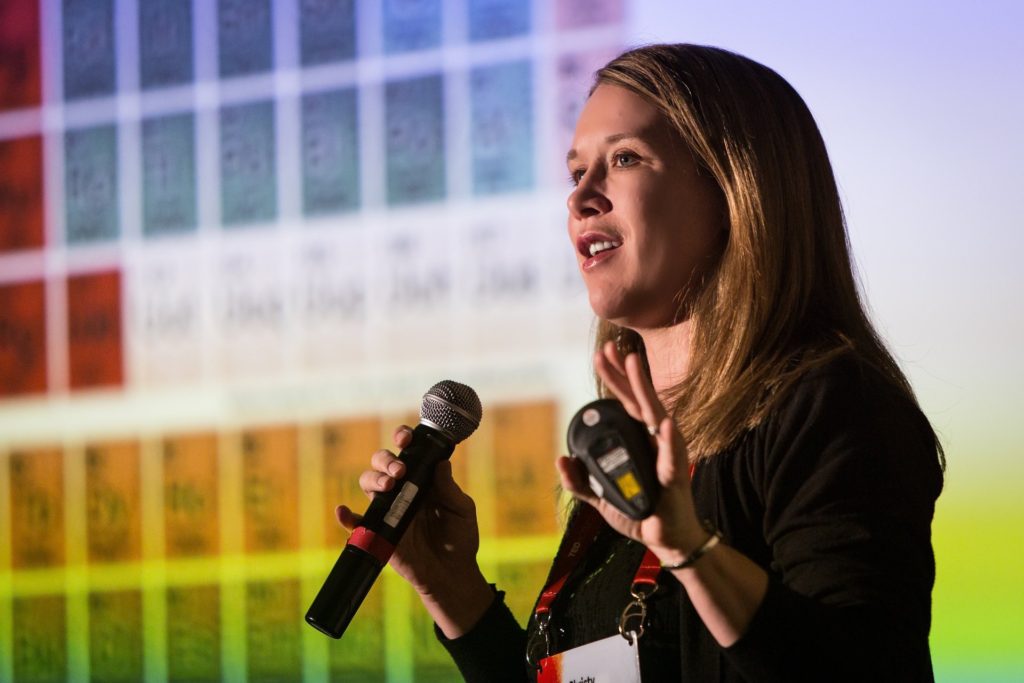 Dr. Christy Haynes is the Elmore H. Northey Professor of Chemistry at the University of Minnesota. She completed her undergraduate studies in Chemistry at Macalester College and received her MS and PhD in Chemistry from Northwestern University. Next, Christy was awarded a National Institutes of Health National Research Service Award Post-Doctoral Fellowship to conduct research at the University of North Carolina, Chapel Hill. She joined the faculty at the University of Minnesota in 2005. Christy has received many awards and honors for her research, including the Sara Evans Faculty Woman Scholar/Leader Award, the Taylor Award for Distinguished Research from the University of Minnesota, the Kavli Foundation Emerging Leader in Chemistry Lecturship, the Pittsburgh Conference Achievement Award, the Joseph Black Award from the Royal Society of Chemistry, an Alfred P. Sloan Fellowship, the Arthur F. Findeis Award for Achievements by a Young Analytical Scientist from the American Chemical Society Division of Analytical Chemistry, the Society for Electroanalytical Chemistry Young Investigator Award, the Camille and Henry Dreyfus Teacher-Scholar Award, the NIH New Innovator Award, the NSF CAREER Award, and the Victor K. LaMer Award from the American Chemical Society Division of Colloid and Surface Science. In addition, Christy has been recognized for her excellence in mentoring through receipt of the Advising and Mentoring Award and the Outstanding Postdoctoral Mentor Award both from the University of Minnesota. She has also been listed among the Top 100 Inspiring Women in STEM from Insight into Diversity magazine, the Analytical Scientist‘s “Top 40 Under 40” Power List, and one of the “Brilliant 10” chosen by Popular Science magazine. Christy is with us today to share stories from her journey through life and science.

Life Outside of Science (3:13)
When she’s not at work, Christy loves to go for a run around the lakes of Minneapolis and spend time with her spouse and two kids. Her nine year old son has an analytic mind and is interested in competitive sports, while her five year old daughter enjoys art and music.

The Scientific Side (4:19)
In Christy’s research group, they are working to develop new methods to monitor small quantities of important chemicals in complex environments. Their research also aims to develop new, safe nanomaterials for applications in human health and sustainable energy.

What Got You Hooked on Science? (8:13)
Growing up, Christy didn’t know any scientists, didn’t spend her time in scientific pursuits, and didn’t have any intention to become a scientist. However, she was a hard-working student who did well in school. On her first day of high school chemistry, Christy’s teacher did a demonstration with a big combustion reaction, and this left Christy terrified. The second day, things went much better. They watched a video on chemistry careers, and she remembers seeing a woman in a hazmat suit wading through toxic waste to collect samples to analyze in the lab. Christy was delighted to see that chemistry could help the environment and lead to a job. She decided to major in chemistry in college, and while there, Christy learned about graduate school. Once Christy discovered she wouldn’t have to take out more student loans to go to graduate school, and that she would actually be paid for pursuing her interests, she was sold.

The Low Points: Failures and Challenges (23:45)
Being a faculty member is about generating good ideas, but also working well with the people in your group. Her biggest struggle involved a student who had a sudden transition from being bright, productive, and hard-working to being difficult, unproductive, and intimidating. Christy tried to mentor the student out of their new mental state and sought help from other resources at the university. This situation took a big emotional toll on Christy and her research group, but everyone really came together to support each other.

A Shining Success! (28:35)
Very recently, Christy and her colleagues published a collaborative study in the prestigious journal Science Translational Medicine. This work involved nanoparticles they have developed that make it possible to successfully freeze and uniformly re-warm tissue without damaging the tissue. This has important implications for organ donations, and they have been getting a lot of attention from the press to share the story of their exciting discovery.

Book Recommendations (33:53)
Guns, Germs, and Steel: The Fates of Human Societies by Jared Diamond, The Underground Railroad by Colson Whitehead

Most Treasured Travel (35:39)
In 2010, Christy traveled to Italy for a scientific conference. Her spouse joined her for a wonderful week exploring Tuscany, Florence, and Cinque Terre together before the conference. After they parted ways, she was excited to immerse herself in the conference events free of jet lag. The food, down time with her husband, and the science were all amazing! Christy also talks with us about the first scientific conference she ever attended which was held in China. This was her first trip outside the U.S., and Christy was enchanted both by the culture and the communication of science at the conference. A final turning point travel experience Christy mentions was a trip to Budapest where, for the first time, she wasn’t nervous presenting her research to an audience. This was the first time Christy really felt like an expert in her field, and she decided on this trip that she would apply for faculty positions.

Quirky Traditions and Funny Memories (38:13)
Christy’s research group attends the Minnesota State Fair together every year. They have participated in a variety of different competitions in the fair over the years, including making a vegetable car, milking cows, and eating cottage cheese. It’s quirky and a lot of fun. Another fantastic tradition has been an annual pie-baking contest at the end of summer. The contest includes blind tasting and scoring, and Christy has yet to emerge victorious.

Advice For Us All (42:13)
As a faculty member, you get invited to do a lot of wonderful things. It’s okay to say no to some of these opportunities if you can’t realistically fit them into your life. Chances are, you’ll be asked to do more great things in the future. In addition, everyone who finishes an M.S. or Ph.D. is an expert in a particular research topic. However, what distinguishes you from your competitors in the job market will often be the many other skills you pick up along the way, including communication, mentoring, and management. Make sure to hone these skills as well.

Guest Bio
Christy and her research group members focus on applications of analytical chemistry in the fields of immunology and toxicology, with much expertise in the area of single cell analysis. One major area of interest is nanotoxicology – an emerging field investigating the biological and ecological impacts of engineered nanomaterials. Another major focus in Christy’s group is on studying fundamental properties of cells involved in inflammation. In fact, Christy and her colleagues have performed the first ever real-time single blood platelet measurements, examining the chemical messenger molecules that platelets secrete upon stimulation. While most of Christy’s research in the lab employs electrochemical and spectroscopic techniques, the group is always exploring new and exciting technologies to answer pressing bioanalytical questions.