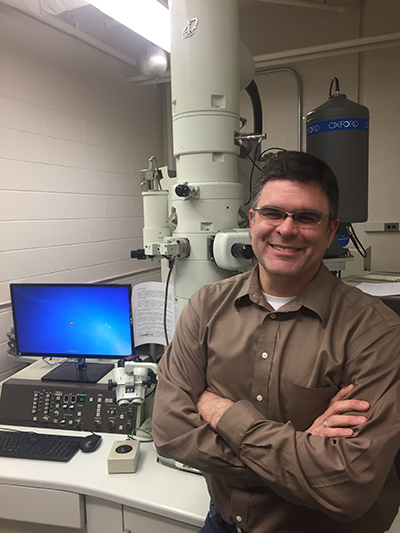 Dr. Daniel Lewis is an Associate Professor In the Department of Materials Science and Engineering at Rensselaer Polytechnic Institute. He received his B.S., M.S., and Ph.D. each in Materials Science and Engineering from Lehigh University. Afterwards, he was awarded a National Research Council postdoctoral fellowship to work at the National Institute of Standards and Technology. Before joining the faculty at Rensselaer, Dan conducted materials science research at GE Global Research. Dan was the recipient of an NSF CAREER Award, as well as a the International Metallographic Contest Jacquet-Lucas Award. He is here with us today to talk about his research and give us an inside look at his experiences in life and science.

Life Outside of Science (2:18)
Life outside of the lab for Dan is filled with family, music, and games. He plays the guitar, while his son and wife play the piano and oboe, respectively. One of their favorite games to play together at the moment is Carcassonne.

A Dose of Motivation (5:17)
“Everything should be made as simple as possible, but not simpler.” – Albert Einstein

What Got You Hooked on Science? (9:25)
In addition to inspiration gained from figures like Carl Sagan and Mr. Wizard, Dan was encouraged to pursue science and engineering by counselors and passionate teachers during middle school and high school. As a college student, Dan had an engineering professor who engaged the class in hands-on activities to better understand materials science, and these demonstrations left Dan absolutely captivated. At that moment he decided to become a materials engineer. Dan’s enthusiasm for teaching dates back to his days as a teenager when he taught guitar lessons. It was amazing to be able to help someone suddenly be able to do something they couldn’t do moments before. Combining his love of materials science and teaching put Dan on track for a career as a faculty member in materials engineering.

The Low Points: Failures and Challenges (23:22)
Patience and resilience are lessons that scientists have to learn over time. A few years ago, another researcher published work that Dan had considered pursuing several years before but never completed. Rather than becoming frustrated and giving up when one of his potential research lines was taken by someone else, Dan viewed this as a validation that maybe some of his ideas were good enough for others to want to work on as well. He knew he had other ideas and that if another one failed or came to fruition in another lab, there were still others on which he could work.

A Shining Success! (27:27)
A few years ago, Dan was working on a materials science project on grain growth within materials. Grain growth is basically the evolution of the microstructure of a material. They worked out a solution to a geometric problem to determine whether a grain was growing or shrinking. The result was a number that represented the geometric average of the properties of the idealized grain. In that moment when the number emerged, it felt like everything clicked and things started to make sense. This was a phenomenal feeling, and these eureka moments are what researchers chase every day.

Most Treasured Travel (30:21)
One of Dan’s favorite places to travel for science is the South of France. He was there not long ago for a meeting on interfaces within the microstructure of materials and how these interfaces behave under certain conditions. While there, Dan enjoyed the beautiful harbor and had time to think critically about what he was doing in the lab and why. There was also time allotted in the meeting for attendees to go for walks and hikes which led to great discussions with other researchers. Dan generated a lot of excellent ideas in just a few days and came back to the lab super-charged and ready to dive back into his research.

Quirky Traditions and Funny Memories (32:08)
In Dan’s lab, they have a tradition that was started by one of his students a few years ago where time is informally spent on Fridays building small pieces of equipment needed to do particular jobs in the lab. Typically these pieces of equipment would be prohibitively expensive to buy commercially, but they have made fully functional versions much less expensively to get the job done. One Build-It-Friday invention called a ball mill would have cost a few thousand dollars to purchase, but the students built one that cost only about $50, and it increased productivity by six times over the commercial model!

Advice For Us All (38:11)
Everyone is on their own timeline. Your path is your path and yours alone, so try to avoid comparing yourself to others. Keep asking questions, and keep learning new things. Also, fail early, and fail often. If you don’t fail, you’re not trying hard enough. Getting it wrong is the first step to getting it right.