Listen to the Episode Below (00:43:34)
Play / pause
1x
1.5x
2x
0:00
0:00
00:43:34
volume
iTunesGoogle PlayShare Leave a ReviewClammr ItListen in a New WindowDownloadSoundCloudStitcherSubscribe on AndroidSubscribe via RSS
Sign up to receive bonus content about our guests and sneak peeks for a guest from the next week’s interviews! 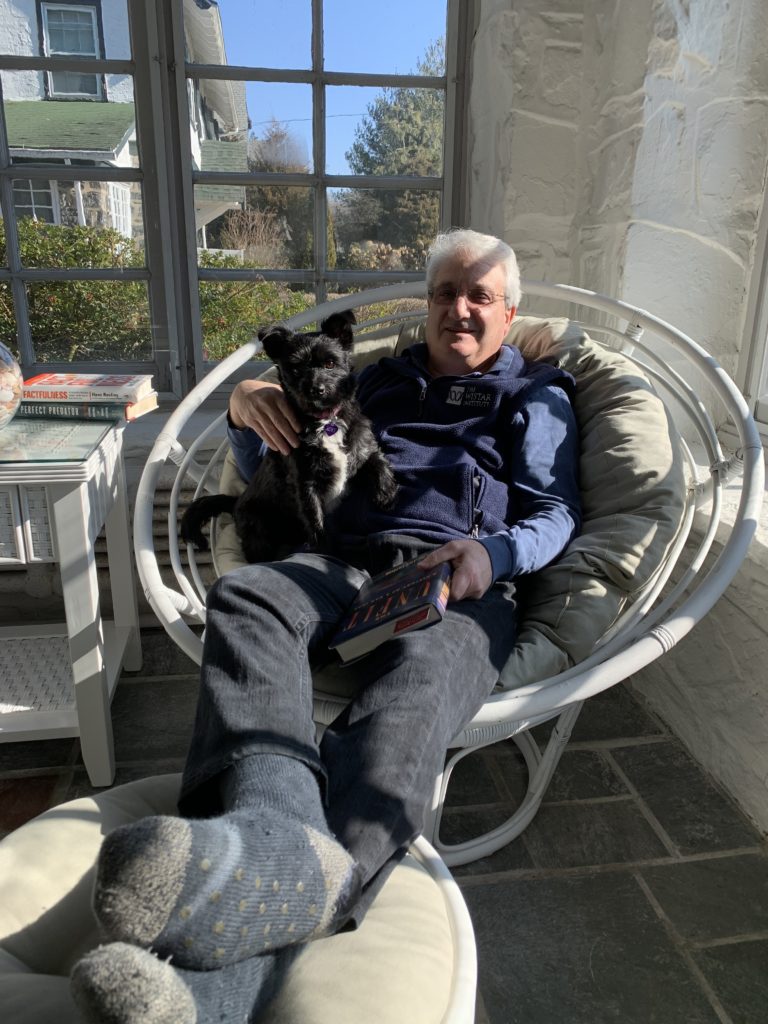 Dr. David Weiner is Executive Vice President, Director of the Vaccine & Immunotherapy Center, and the W.W. Smith Charitable Trust Professor in Cancer Research at The Wistar Institute. He is also Emeritus Professor of Pathology and Laboratory Medicine at the Perelman School of Medicine at the University of Pennsylvania. David received his B.S. in biology from the State University of New York at Stony Brook, his M.S. in biology from the University of Cincinnati, and his  Ph.D. in developmental biology from the University of Cincinnati College of Medicine. Afterwards, David worked as a research fellow in the Department of Pathology and Laboratory Medicine at the University of Pennsylvania before joining the faculty there. He held a joint position as Assistant Professor of Pathology and Laboratory Medicine at The Wistar Institute and the University of Pennsylvania School of Medicine from 1990-1993. David returned to The Wistar Institute in 2016 to accept his current positions. Among his many awards and honors, David has been elected as a Fellow of the American Association for the Advancement of Science and the International Society for Vaccines. He has also received the NIH Director’s Transformative Research Award, the Vaccine Industry Excellence Award for Best Academic Research Team, the prestigious Hilleman Lectureship from the Children’s Hospital of Philadelphia, a Stone Family Award from Abramson Cancer Center for his groundbreaking work on DNA vaccines for cancer immune therapy, and the Scientific Achievement Award from Life Sciences Pennsylvania. In addition, David was named a “Top 20 Translational Researchers” in 2016 by Nature Biotechnology.

Life Outside of Science (3:10)
David and his wife enjoy reading and going on walks with their dog Ruby. Ruby is a Shih Tzu Yorkie mix that they rescued after a recent hurricane in Puerto Rico.

The Scientific Side (4:01)
In the lab, David and his colleagues are creating drugs using the same DNA codes and signals that our bodies use naturally. These drugs are natural compounds that can prevent people from getting sick or can help them be healthier. One area of David’s research focuses on developing DNA vaccines to prevent illness. These DNA vaccines are designed to create specific proteins that trigger the immune system to respond to fight particular pathogens.

A Dose of Motivation (6:25)
“I would like you to stop thinking. There is no thinking in science. There is only creating and engineering and doing. Don’t get stuck and tie yourself up by thinking too much. […] Don’t ruminate. Just move forward.”

What Got You Hooked on Science? (9:32)
One of David’s cousins had lupus, a disease where a person’s immune system attacks their own tissues and organs. This is a complex, inherited disease, and it made David think a lot about genetics when he was a kid. The fields of genetics and molecular biology were still relatively new as he was growing up. Early in college, David was really interested in becoming a gym teacher because he liked sports and appreciated the importance of being active. At the same time, he was also interested in genetics. David’s cousin worked in a genetics lab, and she encouraged him to pursue genetics. As a result of this encouragement, David began working as an undergraduate research student in a lab that studied chromosomes and how chromosomes may contribute to disease. The more he learned, the more fascinated he became. David decided to go to graduate school, and it was there that he furthered his interest and expertise working at the intersection of genetics and the immune system.

The Low Points: Failures and Challenges (21:35)
In the 1990s, David and his colleagues first described and published the approach of administering DNA to trigger the immune system to treat disease. This approach sparked interest in the field, and many different research groups began working in this area. David’s group was the first to initiate clinical trials, establish the safety of the DNA approach, and provide evidence that it provoked an immune response in the clinic. They also had promising results showing that DNA could be used to cure a myriad of diseases in animal models. However, people don’t always respond the same to treatments as other animals. After a few years and some clinical trials, David and his colleagues were becoming concerned. Their treatments produced an immune response in people, but the response was much lower than they had hoped, and it was perhaps not a high enough level to be useful. This was a really unexpected turn of events. It was a difficult decision, but David’s lab decided to stop and focus on the details of how to generate an appropriate and sufficient immune response across different species. They created internal standards that hadn’t been developed, and these allowed them to judge the quality of an immune response to their treatment versus other products. From here, they determined how to improve their product to get a better immune response. Because they spent the time working out these pieces of the puzzle, they now are able to generate an immune response in about 100% of cases, and this allows them to be more confident in their measurements and decisions.

A Shining Success! (27:26)
Using DNAs for therapeutic purposes is showing great promise, but they are still early in the process of developing these treatments. David and his team now consistently see immune responses after treatment, but there is still a long way to go. Currently, David is very interested in cancer immune therapy applications for DNA administration because there is a lot of potential to have a big impact on patients. He began working with companies to improve delivery devices to make DNAs more consistent and more potent as therapeutics. The combination of changing both the DNA sequences they use and the formulations of the delivery devices has allowed them to develop methods to deliver high concentrations of therapeutic to very small, localized areas in the body. With these methods, millions of cells take up DNA and express it in a particular area. This opens up interesting new possibilities for drug delivery because people may be able to make enough of the drugs they would need with their own cells, exactly where the drugs are needed in the body. They are excited to have had multiple research papers published in this area recently and to further develop these methods as a clinical tool that people may find useful.

Most Treasured Travel (32:35)
Some of David’s most meaningful travel opportunities have occurred when he was invited to places to help solve a problem. For example, he traveled to Uganda during the height of the AIDS epidemic years ago to determine how to deploy a vaccine. David also visited River City in Thailand to contribute his expertise to helping manage infectious disease there. On another occasion, David went to Seoul, South Korea during the height of the Middle East Respiratory Syndrome (MERS) outbreak. The city was eerily quiet, schools were closed, and the ambient tension was palpable. There was a lot of pressure on David and his colleagues to come up with a solution. Going into this trip, they weren’t certain they had a good solution, but they were transparent about the potential positive and negative outcomes, and they did their best to provide benefit.

Quirky Traditions and Funny Memories (37:04)
Having a sense of humor and being able to laugh at yourself can be helpful when you’re faced with a lot of criticism. David was previously invited to participate in a TV interview as a scientific expert in the midst of a disease outbreak. The segment was intended to be serious, but when he, his wife, and his three daughters watched his interview later at home, his daughters burst out laughing. They told David that he was so boring when he talked about his work that he would put the audience to sleep! Communicating science can be tough because a lot of complicated terms and jargon are used, and this often makes it difficult for the audience to connect and understand what is being said.

Advice For Us All (41:32)
Enjoy the people who surround you in your life and work. Remember that the connections you make are important, you’re all in this together, and it is a team effort. Also, keep in mind that we are currently living better, longer, and happier than any other generation before us on Earth. Advancing science and our understanding of the world has helped us get to this point. We can’t live without science, so we should enjoy living with it.

Guest Bio
David directs a translational molecular immunology research team focused on creating novel immunotherapy approaches for disease prevention and treatment using synthetic nucleic acid technology. Accomplishments of the team and collaborators include the first clinical studies of DNA vaccines, with a focus on advances in gene optimization and electroporation (EP)-mediated DNA delivery. Their work has revitalized the field, rapidly and safely moving new advances into human studies. These include the world’s first Zika vaccine, the first MERS vaccine, an advanced Ebola Vaccine, and a novel HIV vaccine, among others. Additionally, the Weiner laboratory has helped to develop immunotherapy approaches that are currently in clinical testing for HPV-associated cancer, prostate and other cancers. The first clinically efficacious therapeutic DNA vaccine for HPV cervical intraepithelial neoplasia (CIN) has moved into a licensure trial (REVEAL). David is an avid trainer, advisor and advocate for students, fellows and junior faculty as he is highly committed to developing the careers of young scientists.