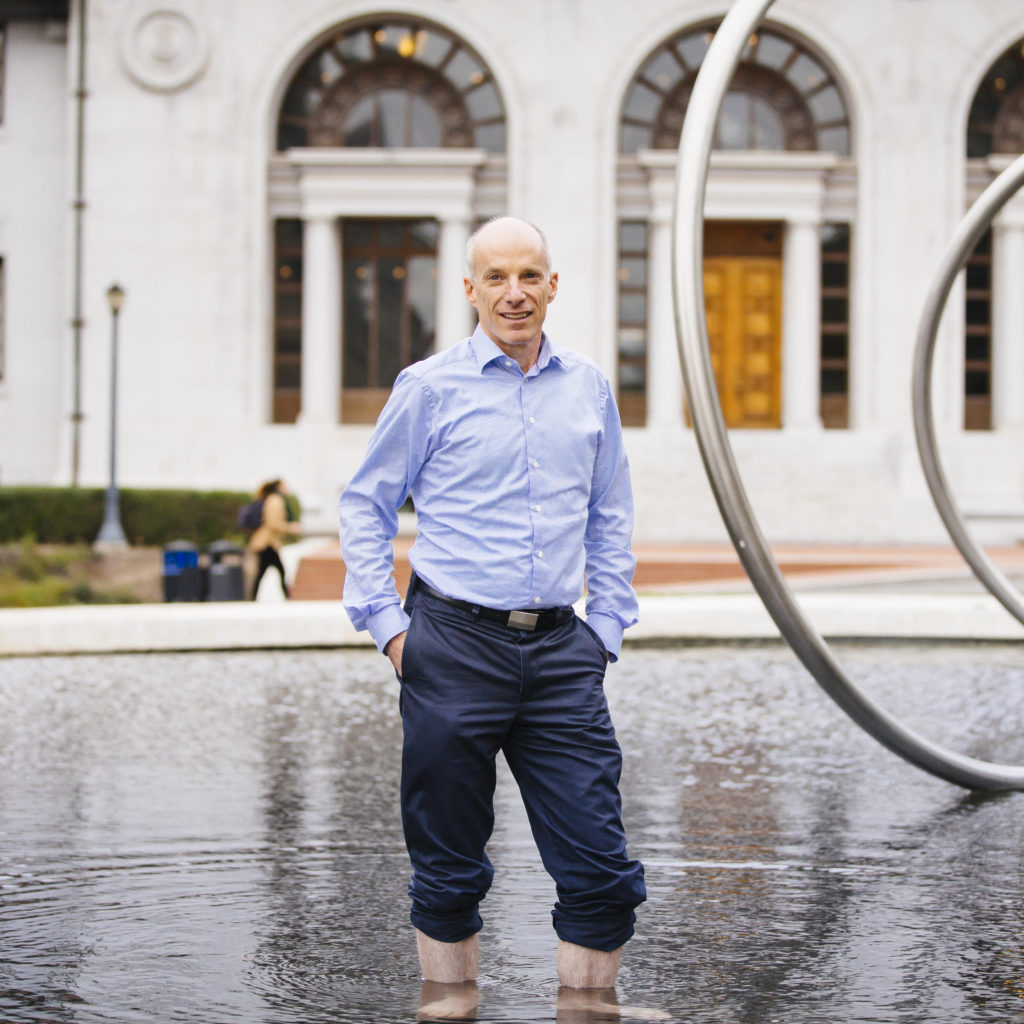 Dr. David Sedlak is the Plato Malozemoff Professor in the Department of Civil and Environmental Engineering, Co-Director of the Berkeley Water Center, Deputy Director of the National Science Foundation Engineering Research Center for Reinventing the Nation’s Urban Water Infrastructure, and Director of the Institute for Environmental Science and Engineering at the University of California, Berkeley. In addition, he is author of the book Water 4.0: The Past, Present, and Future of the World’s Most Vital Resource. David earned his Bachelor’s degree in environmental science from Cornell University. After college, he worked as a Staff Scientist at Environ Corporation in Princeton, New Jersey. David then attended graduate school at the University of Wisconsin, Madison where he was awarded his Ph.D. in water chemistry. Prior to joining the faculty at UC, Berkeley, David conducted postdoctoral research at the Swiss Federal Institute for Environmental Science and Technology in Dübendorf, Switzerland. Throughout his career, David has received numerous awards and honors, including a National Science Foundation CAREER Development Award, the Paul L. Busch Award for Innovation in Applied Water Quality Research, a Fulbright Senior Scholar Award, a Fulbright Alumni Initiative Award, the U.S. National Academy of Engineering Gilbreth Lecture Award, and the Athalie Richardson Irvine Clarke Prize for Excellence in Water Research. He has also been named an Elected Member of the U.S. National Academy of Engineering, as well as a Rydell Distinguished Visiting Professor at Gustavus Adolphus College and the Francqui Foundation Chair, Ghent University. In our interview, David shares more about his life and research.

Life Outside of Science (3:01)
When David isn’t working, he enjoys long-distance running. He often runs along the many trails in the Berkeley area, and he participates in an annual local trails marathon.

The Scientific Side (3:44)
David is working to create technologies that will allow future generations to have access to adequate amounts of clean, safe water.

A Dose of Motivation (4:28)
“If it were easy and obvious, someone would have done it already.”

What Got You Hooked on Science? (6:51)
Interest in the environment is what first drew David towards science and engineering. He grew up close to the water in Oyster Bay, NY, and he spent a lot of time outside around the bay. As the years passed, David saw and experienced pollution issues in the water, and it made him wonder how we could better live in harmony with the natural environment. He recognized that science could be one path towards solving these problems. David began college as a natural resources major, but he quickly realized that he would rather solve larger scale environmental problems than focus on the management aspects. In his second year of college, David got involved in research, and it was a great experience. After graduating, David worked for an engineering company that helped clean up hazardous waste sites around New York City. Working in these real-world polluted sites and interfacing with communities dealing with these problems, he realized how much he still had to learn. He decided to go to graduate school to pursue a career developing ways to destroy chemicals that contaminate our environment and our water.

The Low Points: Failures and Challenges (18:14)
In one project, David and a graduate student in the lab were trying to measure very low concentrations of a synthetic estrogen compound (the active ingredient in birth control pills) in water. The techniques they were using worked well in the lab and when they were working with relatively clean water. However, after reviewing data the graduate student spent months in the field collecting and processing, they realized they had a problem. He had to go back to the drawing board. At the same time, David was preparing to be considered for promotion and tenure. David and the student adjusted the methods to better purify their samples, and they spent the next year in the field repeating the experiments from the previous year. Ultimately, the project was successful, but the year-long delay was incredibly stressful.

A Shining Success! (22:51)
About 8 years ago, a postdoc in David’s lab did a series of experiments trying to break down a simple organic chemical called benzene. In textbooks, this is done with a simple oxidation reaction that creates only one product called phenol. They designed an experiment where they would monitor the disappearance of benzene and the formation of phenol. At the end of the experiment, they could only account for about half of the benzene that was lost. This unexpected finding launched a project that has taken seven years to solve. They discovered that there are actually several different reactions that occur, and the products that are created are more complex, and in some cases much more toxic, than the single product they originally expected. This has important implications for how wastes containing benzene should be treated before being released into the environment. David and his team discovered something no one had ever seen before, and they also came up with a solution where the products could be subjected to a second biofiltration step with bacteria to break down the toxic chemicals produced by the initial reaction.

Book Recommendations (26:51)
Factfulness: Ten Reasons We’re Wrong About the World — and Why Things Are Better Than You Think by Anna Rosling Rönnlund, Hans Rosling, and Ola Rosling; Water 4.0: The Past, Present, and Future of the World’s Most Vital Resource by David Sedlak

Most Treasured Travel (29:45)
The campus at the University of California, Berkeley has been the most meaningful place that David’s work has taken him. The school has employed many inspiring researchers and has a great history of amazing discoveries. Stepping onto the Berkeley campus for the first time as a new faculty member was intimidating, but this environment has been incredibly intellectually stimulating. If you visit UC, Berkeley, you should definitely walk through the center of campus to visit the clock tower. From the top of this tower, you can get an excellent view of the campus and listen to the ringing of the bells. Also, take the opportunity to walk around campus and step into different lecture halls. There is something interesting going on in every building every day.

Quirky Traditions and Funny Memories (33:02)
When David was a postdoc, he worked on a project analyzing the chemistry that occurs in cloud droplets. Cloud droplets are exposed to sunlight and they contain trace amounts of metals and soil. Interesting reactions occur within these droplets, and they are good models for processes that could be used to purify water. As part of the project, David had to go out into the high hills of Northern England to collect cloud water samples. He didn’t really know what to expect, but he packed up his equipment, rented a van, and convinced his wife to accompany him as a field technician. When he arrived, David saw that all of the other field research groups were outfitted with recreational vehicles with electricity, heat, refrigerators, music, and other useful amenities. In contrast, David and his wife spent their time sitting in a cold, dark van for 36 hour intervals, and they couldn’t run the engine to turn on the heat during the experiments. They were miserable, and this was the first and last time David ever collected cloud droplets.

Advice For Us All (39:07)
Never write a textbook or feel pressured to do something else that you feel is expected of you, but isn’t really necessary. Instead, do the things that make you happy, that other people aren’t doing, and that you think are going to have the biggest contribution to solving big problems. Also, if you like to dream and be creative, a career in research is a great fit. The sky is the limit.

Guest Bio
David’s career has been focused on the development of new technologies to provide a safe and abundant water supply to future generations. To achieve this goal, he directs a team of graduate students and postdoctoral researchers who study everything from the mechanisms through which chemicals are degraded in advanced water treatment plants to the ways in which nature-based treatment systems can be integrated into water treatment. Recognizing that change requires a lot more than simply conducting research, David serves on various government advisory panels and works with water utilities and cities around the world to implement new approaches for obtaining and treating water. He also engages with members of the public and decision-makers to build support for these approaches whenever he can reach a large number of people (e.g., writing books, op-ed pieces, magazine articles, TED talks). In his remaining time, he chases his energetic dog around the many trails running through the Berkeley Hills and spends his time discussing ways of protecting the environment with his wife (MS in environmental engineering), daughter (BS in chemistry) and son (working on BS in Chemistry).