Listen to the Episode Below (00:41:02)
Play / pause
1x
1.5x
2x
0:00
0:00
00:41:02
volume
iTunesGoogle PlayShare Leave a ReviewClammr ItListen in a New WindowDownloadSoundCloudStitcherSubscribe on AndroidSubscribe via RSS
Sign up to receive bonus content about our guests and sneak peeks for a guest from the next week’s interviews! 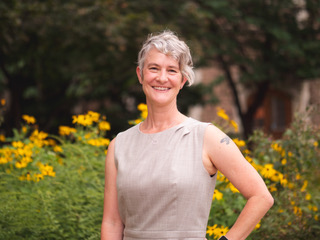 Dr. Elizabeth Haswell is a Professor of Biology at Washington University in St. Louis and a Howard Hughes Medical Institute (HHMI)-Simons Faculty Scholar. She received her B.S. degree in biochemistry from the University of Washington and her Ph.D. in biochemistry from the University of California, San Francisco. Afterwards, Liz conducted postdoctoral research at the California Institute of Technology before joining the faculty at Washington University in St. Louis where she remains today. In addition to being named an HHMI-Simons Faculty Scholar, Liz received a National Science Foundation Early Faculty Career Development (CAREER) Award. In our interview she shares more about her life and science.

Life Outside of Science (2:14)
In her free time, Liz enjoys traveling, hiking, hanging out with her family, and reading. She also co-hosts a plant biology podcast called The Taproot.

The Scientific Side (5:59)
Liz’s research examines how the molecules, cells, and tissues within plants can sense and respond to forces. In particular, she studies a type of proteins that is really sensitive to mechanical signals called mechanosensitive ion channels. Liz is working to understand how mechanosensitive ion channels sense and respond to internal forces within plant cells, such as turgor pressure (i.e. the water pressure within cells).

A Dose of Motivation (7:29)
“Do science out of curiosity and delight, not for status and productivity.” – Ellen Daniell
“The culture of overwork is just the patriarchy trying to keep you down.”

What Got You Hooked on Science? (12:06)
Though they weren’t scientists, both of Liz’s parents worked as academics at Washington State University. Liz grew up in a house full of books in a small college town, and she was able to travel with her parents when they went on sabbatical every seven years. From an early age, she thought she would go into academia. There was a brief period in high school where Liz wanted to be an interior decorator, but taking her first biology class sparked her love for biology. Liz was able to take some classes at Washington State University, and she realized that she wanted to do scientific research. When started her freshman year in college, Liz put her CV in the mailbox of every faculty member in the Biology Department, hoping to be hired to work in a lab. A new professor hired Liz to help set up his laboratory, and through his research, Liz’s passion for plant science was cemented.

The Low Points: Failures and Challenges (21:33)
As a postdoctoral fellow, Liz had a very tough time identifying a productive project. She was transitioning from working with a relatively simple, unicellular yeast to working with more complex, multicellular plants. This was a big change, and she didn’t appreciate how much longer the timelines for all of her experiments would need to be in this new organism. Liz experienced multiple major failures where she had to completely scrap her project and start over on something completely new. It took 3-4 years before she finally found a project that worked. This was extremely demoralizing, and she had to battle through thoughts that maybe she wasn’t cut out to be a scientist. In addition, when Liz started her faculty position, she didn’t publish any papers for four years. Her projects were working, but she had started multiple projects, and each took a long time to get going. At the time, Liz didn’t really appreciate that scientific journal articles were critical for her to be successful in getting grants and being awarded tenure. She was attracted to the ideal of publishing one really big paper, rather than thinking strategically about publishing a few smaller papers as well to keep her publication record going.

A Shining Success! (27:08)
About two years ago, Liz decided she wanted to incorporate mathematical modeling into her research. This decision was motivated in part by new grant requirements for quantitative computational analyses, but Liz was also really excited to try applying modeling to her research questions. She attended a Cell Modeling Hackathon held at the University of California San Francisco where she met a lot of expert modelers. While there, Liz tried to sell them on the biological problems she was working on and how they could be amenable to modeling. She also sought a collaboration with a fellow faculty member at Washington University who worked in the Physics Department, and she was able to recruit a graduate student interested in working in this area. Recently, one of the modeling projects Liz proposed was funded! She is proud to have developed a new area of research in her lab, formed excellent collaborations, and received financial support to pursue the project.

Book Recommendations (3:24, 7:36)
How to Do Nothing: Resisting the Attention Economy by Jenny Odell, The Overstory by Richard Powers, Every other Thursday: Stories and Strategies from Successful Women Scientists by Ellen Daniell

Most Treasured Travel (29:49)
This past July, Liz travelled to Glasgow, Scotland to attend a scientific meeting. She arrived a week before the conference began with her husband and 9-year-old daughter. They had an amazing time hiking a portion of the West Highland Way trail. The scenery was beautiful, the people were wonderful, and the weather was great. After their week-long hiking excursion, Liz’s husband and daughter went home, and she was able to fully immerse herself in science at the meeting.

Quirky Traditions and Funny Memories (31:57)
In graduate school, Liz and her labmates would report their progress from the past week in their weekly lab meeting. Before each lab meeting, they would get together to pick a weird word that everyone had to work into their short presentation. They never told their advisor about this tradition, and it was hilarious to see how everyone worked the secret word into their presentation. In her own research lab, they go out for a lab dinner every time a paper is published. They also plan a lab retreat every summer at Liz’s cabin and have lab holiday parties.

Advice For Us All (37:32)
Slowing down and working carefully will save you so much time in the long run. When you are frustrated with a problem, stop and listen to advice from others. Also, don’t let anyone tell you who or what you should be as a scientist. There are so many different kinds of scientists in the world.

Guest Bio
Liz and her research group are working to identify the molecular and cellular mechanisms by which plants perceive force, with a particular focus on mechanosensitive ion channels. Liz is a Reviewing Editor for The Plant Cell, the Director of Research for the NSF Science and Technology Center for Engineering Mechanobiology, an AAAS Council Delegate in Biological Sciences, and serves on both the North American Arabidopsis Steering Committee and the Multinational Arabidopsis Steering Committee. As part of her mission to advocate for an academic culture that values sustainability, diversity, and authenticity, she co-founded and co-hosts the Taproot Podcast–which “digs beneath the surface of a recent publication in plant biology to tell the story behind the science”. The Taproot is currently in the midst of its fourth season. She and her husband Greg love to hike, cook, and travel with their spicy 9-year-old daughter Maia.