Listen to the Episode Below (00:59:55)
Play / pause
1x
1.5x
2x
0:00
0:00
00:59:55
volume
iTunesGoogle PlayShare Leave a ReviewClammr ItListen in a New WindowDownloadSoundCloudStitcherSubscribe on AndroidSubscribe via RSS
Sign up to receive bonus content about our guests and sneak peeks for a guest from the next week’s interviews! 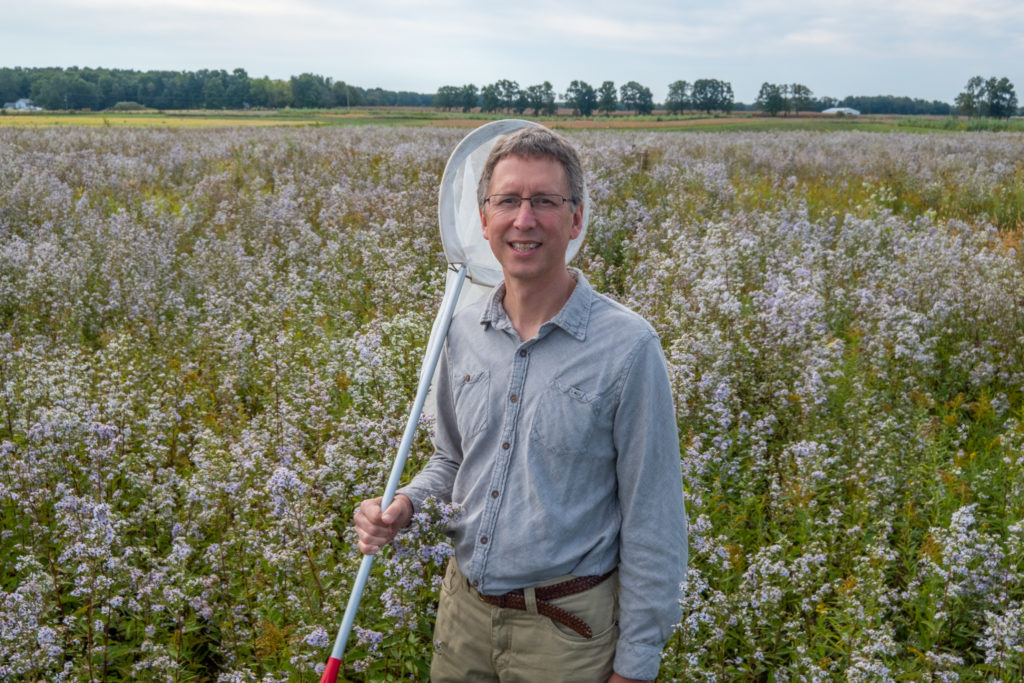 Dr. Nick Haddad is a Professor in Integrative Biology at Michigan State University and a Senior Terrestrial Ecologist at the W.K. Kellogg Biological Station. In addition, Nick is the author of the recently released book The Last Butterflies: A Scientist’s Quest to Save a Rare and Vanishing Creature. Nick received his BS in Biology from Stanford University, and he was awarded his PhD in Ecology from the University of Georgia. Afterwards, Nick conducted postdoctoral research at the University of Minnesota. Before joining the faculty at Michigan State, University, Nick served on the faculty at North Carolina State University for about 19 years. In our interview, Nick shares more about his life and science.

Life Outside of Science (2:09)
Outside of work, Nick has been enjoying renovating his home with his wife who is a historic preservationist. Their home was built in 1840, so they have been tackling a wide variety of projects including updating the plumbing and replacing all of the electrical wiring.

The Scientific Side (5:09)
Through his research, Nick searches for the rarest butterflies in the world and works to understand what factors cause the decline of these butterflies and what we can do to conserve them.

What Got You Hooked on Science? (12:24)
Nick’s love of searching for and collecting rare things started with stamps, coins, and baseball cards when he was a kid. He also grew up with a strong love of the outdoors. This connection with nature started with the summers Nick spent at his grandparents’ farm on an island in the Chesapeake Bay. His grandfather was an academic microbiologist who encouraged scientific curiosity and exploration. Nick had fun running around with his cousins along the shoreline, catching fish, and wading in the water with a net catching crabs. His interests turned towards ecology in college, and his first studies were on birds. Nick was convinced he would continue to research birds in graduate school. However, upon hearing the kinds of questions Nick was interested in studying, his advisor directed him to butterflies. Since then, Nick has been conducting experiments to better understand butterfly ecology and to help conserve and recover populations of endangered butterflies.

The Low Points: Failures and Challenges (26:51)
In graduate school Nick worked with the U.S. Forest Service to create a large experiment to test the effects of habitat loss and fragmentation on a particular butterfly species. He was especially interested in the role of landscape corridors that connected fragments of habitat. With the help of the U.S. Forest Service, they harvested 100 acres of forest and reserved hundreds of acres of land. In addition, he removed the butterfly’s food plants to set up experimental food plants and grew out thousands of butterflies from eggs to adults so he could release butterflies of known ages. Unfortunately, Nick chose the spicebush swallowtail butterfly for his study, and (he later discovered) this butterfly does not use landscape corridors. At this point, Nick was halfway through graduate school, he and the U.S. Forest Service had invested so much work, and he had nothing to show for it. After briefly considering giving up on graduate school altogether, Nick pivoted his project to include other butterfly species and was able to complete his dissertation research.

A Shining Success! (31:08)
The successes that Nick enjoys most are the ones experienced by his students and colleagues. Each year, he mentors students in his lab and also teaches large classes with hundreds of students. Recently, a former student from one of Nick’s large ecology classes contacted him to say thank you and let him know that his class completely changed the trajectory of her career. The student initially thought she wanted to be a veterinarian, but through his class she discovered there were opportunities to work with animals through conservation research. She went on to get a master’s degree studying the biology of pollinators and now has a great position with the U.S. Fish and Wildlife Service where she also has oversight of an endangered butterfly.

Book Recommendations (41:16)
Les Misérables by Victor Hugo, Alexander Hamilton by Ron Chernow, The Last Butterflies: A Scientist’s Quest to Save a Rare and Vanishing Creature by Nick Haddad

Most Treasured Travel (45:06)
After finishing college, Nick had the opportunity to work on a project collecting butterflies in Tikal National Park in Northern Guatemala. He was sent there with a tent, a mountain bike to navigate the rough forest trails, and a butterfly net. Though Nick knew very little about butterflies, he was an expert at collecting things, so he did well at the job. After collecting the butterflies, Nick would send them back to experts to identify the species. It was amazing to spend two years living in a tent in a beautiful and remote national park. Later, Nick learned that he found 535 different species of butterflies, three or four of which were entirely new to science. About five years after Nick’s time in the field there, he read in an article that one of the butterflies he discovered was of an entirely new genus!

Quirky Traditions and Funny Memories (49:43)
Weekly lab meetings have become a tradition for Nick’s research group. Initially, the group only met on weeks where they had new scientific papers to discuss or new research findings to present. However, since many lab members were out doing field work, this arrangement meant that they might go weeks or months without seeing each other. To help build camaraderie and get the group together more regularly, they started a tradition of having cookie time each week during lab meeting. Even if they don’t have a presentation scheduled or a paper discussion planned, they still get together each week to eat cookies.

Advice For Us All (56:35)
You can work a reasonable number of hours each week and be a successful scientist. Keeping this balance is critical for your career and your life. Also, it’s not whether you fall, but how you get up that matters. Failures can help you reorient how you are thinking about or approaching a problem to help you succeed.

Guest Bio
There are two overarching themes in Nick’s research. First, all of his work is at the interface of basic science and applied conservation. In addition to population biology of the rarest butterflies, his research includes studies of landscape corridors that create superhighways for plants and animals to increase their diversity, as well as studies in agricultural landscapes across a gradient of land use from conventional agriculture to grasslands. Second, he conducts all of his research within experiments that are two to three decades in duration so far. Restoration experiments for rare butterflies are twenty years old and track population fluctuations on military training lands; the corridor experiment is 35 years old and tracks plant diversity in areas set within pine forest managed by the US Forest Service; and treatments that vary in landuse intensity are thirty years old and are set within an agricultural landscape. Nick’s group has created a website, ConservationCorridor.org, to translate science for land managers and to translate management to scientists. Nick’s hobbies include electrical and plumbing repair; his wife is an historic preservationist and they live in old and fragile homes. He is an avid canoer and spends time each year in the Boundary Waters Canoe Area. He loves picking fruit, and so far this year he has picked 27 pounds of cherries; 30 pounds of blueberries; and one hundred pounds of apples.