Listen to the Episode Below (00:39:50)
Play / pause
1x
1.5x
2x
0:00
0:00
00:39:50
volume
iTunesGoogle PlayShare Leave a ReviewClammr ItListen in a New WindowDownloadSoundCloudStitcherSubscribe on AndroidSubscribe via RSS
Sign up to receive bonus content about our guests and sneak peeks for a guest from the next week’s interviews! 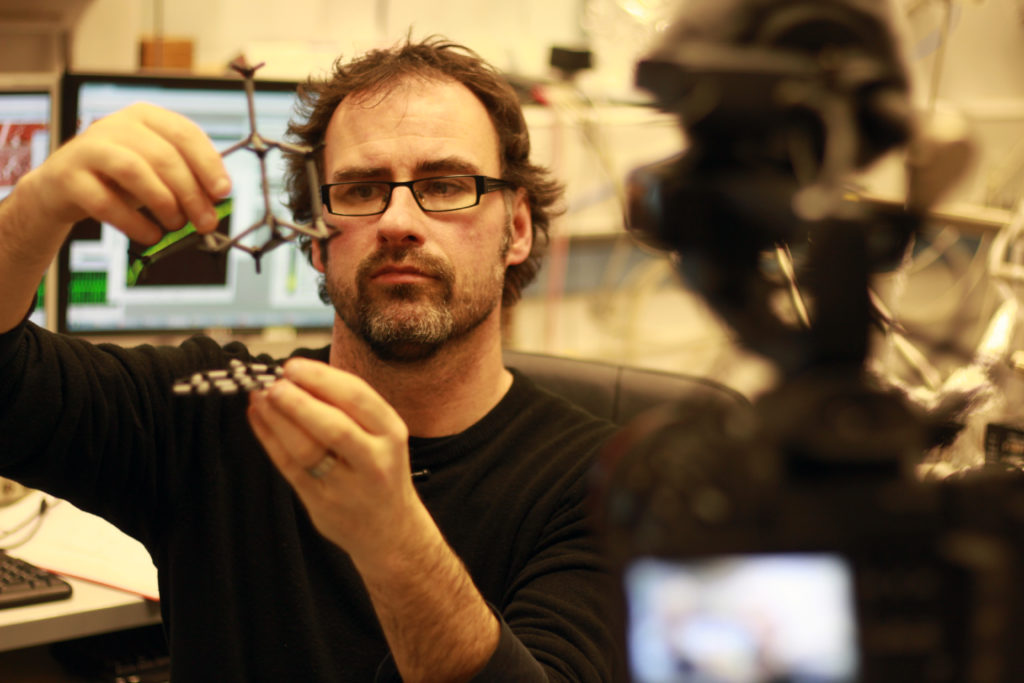 Dr. Philip Moriarty is a Professor of Physics in the School of Physics and Astronomy at the University of Nottingham. In addition, he is an avid contributor to the Sixty Symbols YouTube video project and author of the book When the Uncertainty Principle Goes to 11: Or How to Explain Quantum Physics with Heavy Metal. Philip received his Ph.D. in Physical Sciences from Dublin City University, and he conducted postdoctoral research in physics at the University of Nottingham before joining the faculty there. Over the course of his career, Philip has received a number of awards and honors, including being a member of the Sixty Symbols team awarded the 2016 Kelvin Medal from the Institute of Physics for innovative and effective promotion of the public understanding of physics, and he was also a winner of the 2015 I’m a Scientist, Get Me Out of Here Terbium Zone contest. In our interview Philip shares more about his life and science.

Life Outside of Science (2:18)
Philip is an enthusiastic heavy metal music fan, so he spends his free time listening to rock and other types of music. He also plays a few instruments, including guitar and Aerodrums.

The Scientific Side (3:45)
The work in Philip’s research group focuses on imaging and moving single atoms on different surfaces. He is a nanoscientist, and an important tool for Philip’s research is a scanning probe microscope. This tool is different from typical microscopes because it doesn’t have the traditional optics, lenses, or mirrors. Instead, the scanning probe microscope uses an extremely sharp probe to create images of different surfaces and to modify matter down to the level of single chemical bonds. Their goals are to develop methods for computer-controlled manipulation of matter and 3D printing where you can build materials and objects from individual atoms.

A Dose of Motivation (5:09)
-“If you chose not to decide, you still have made a choice.” From “Freewill” by Rush
-“Cast in this unlikely role. Ill-equipped to act. With insufficient tact.” From “Limelight” by Rush
-“Being Irish, he had an abiding sense of tragedy, which sustained him through temporary periods of joy.” by William Butler Yeats

What Got You Hooked on Science? (10:02)
When Philip was about 10 years old, he and his uncle built a simple crystal radio together. His uncle was a radio amateur who spent his free time putting up aerials, listening to radio broadcasts from across the world, and speaking to other radio amateurs. Philip will never forget the moment he put the earpiece in, tuned the radio, and heard a radio station come in. When he realized his radio’s power came from electromagnetic radio waves in the air, he was fascinated. Later, Philip got into computer programming, and he really enjoyed it as well. Philip chose to pursue a degree in physics rather than computer science, despite his struggles with the math that his physics degree required. When he graduated, Philip planned to continue in science to earn his PhD. Around this time, scientists at IBM Research – Almaden successfully manipulated individual atoms for the first time. This had a huge impact on Philip, and he decided to pursue a PhD in this area of study.

The Low Points: Failures and Challenges (18:00)
In his early years of college, Philip focused his energy on being in a band and playing guitar. Neglecting his studies led to him failing his exams in his third year. As a result, Philip had to repeat the whole year. This failure was devastating, but it was incredibly important in determining the rest of his life. He realized he made a mistake, honed in on his studies, and was able to improve his grades enough to qualify for graduate school. Experiencing failure and learning how to deal with failure is important. Research is a series of failures with occasional successes interspersed. Students who have always been high-performers in classes sometimes struggle when they are suddenly faced with failures in the lab. Keep in mind when you’re doing science that you’re often trying to do something that no one in the world has done before. It will be difficult, and it’s important to develop a tenacious mindset.

A Shining Success! (21:29)
It’s really fun to get the public involved in research with citizen science efforts. Philip has been involved with a YouTube channel called Sixty Symbols. They create short videos where they talk about different topics in physics that they are excited about. As part of one of these videos, they asked drummers to submit drum tracks. Philip and his students analyzed these tracks to evaluate the fluctuations, correlations of the beats, and other features. The community submitted a lot of different drum tracks, and after years of working on the project, they’ve finally submitted this paper for publication.

Book Recommendations (23:40)
When the Uncertainty Principle Goes to 11: Or How to Explain Quantum Physics with Heavy Metal by Philip Moriarty, Inferior: How Science Got Women Wrong and the New Research That’s Rewriting the Story by Angela Saini, The Death of Expertise: The Campaign Against Established Knowledge and Why it Matters by Thomas Nichols, Beyond Weird: Why Everything You Thought You Knew About Quantum Physics is Different by Philip Ball

Most Treasured Travel (27:51)
The very first conference Philip ever attended was held in Chicago. He was a graduate student, it was his first time presenting at a conference, and this was his first visit to the U.S. as well. Philip grew up in the heart of rural Ireland where neighbors were miles away, but he has always been drawn to big cities. The conference was excellent, and he really enjoyed the city of Chicago. Another particularly memorable trip for Philip was attending the Science Foo Camp at the Googleplex in Mountain View, California last year. This event brought together physicists, psychologists, biologists, chemists, neuroscientists, poets, authors, sculptors, and others. It was great to talk to so many talented people far outside his discipline.

Quirky Traditions and Funny Memories (30:16)
Philip has found that there are many physicists who are also interested in heavy metal and rock bands. He’s enjoyed numerous jam sessions with the musicians he has worked over the years in his own research group. Emphasizing these links between the arts, humanities, and STEM fields is important to Philip.

Advice For Us All (34:03)
When you are presenting and talking to people, how you speak is key. In addition to what you are saying, your style and presentation skills are critical. Beyond spoken communication, the ability to write well is important in physics and other scientific fields. When you are choosing your degree and your career, let your interests guide you. Also, remember that there are deep links between physics and heavy metal.

Guest Bio
In collaboration with the PhD and postdoctoral researchers in the Nanoscience Group at the University of Nottingham, Philip focuses on prodding, pushing, pulling and poking single atoms and molecules to explore the fundamental interactions of these building blocks of matter; in this nanoscopic world, quantum physics is all. Having taught physics for over twenty years, he has always been struck by the number of students in his classes who profess a love of metal music, and by the deep connections between heavy metal and quantum mechanics. He’s a father of three—Niamh, Saoirse, and Fiachra—who have patiently endured his off-key attempts to sing along with Rush classics for many years. Unlike his infamous namesake, he has never been particularly enamored of the binomial theorem. Philip vents his spleen regularly at “Symptoms Of The Universe”.