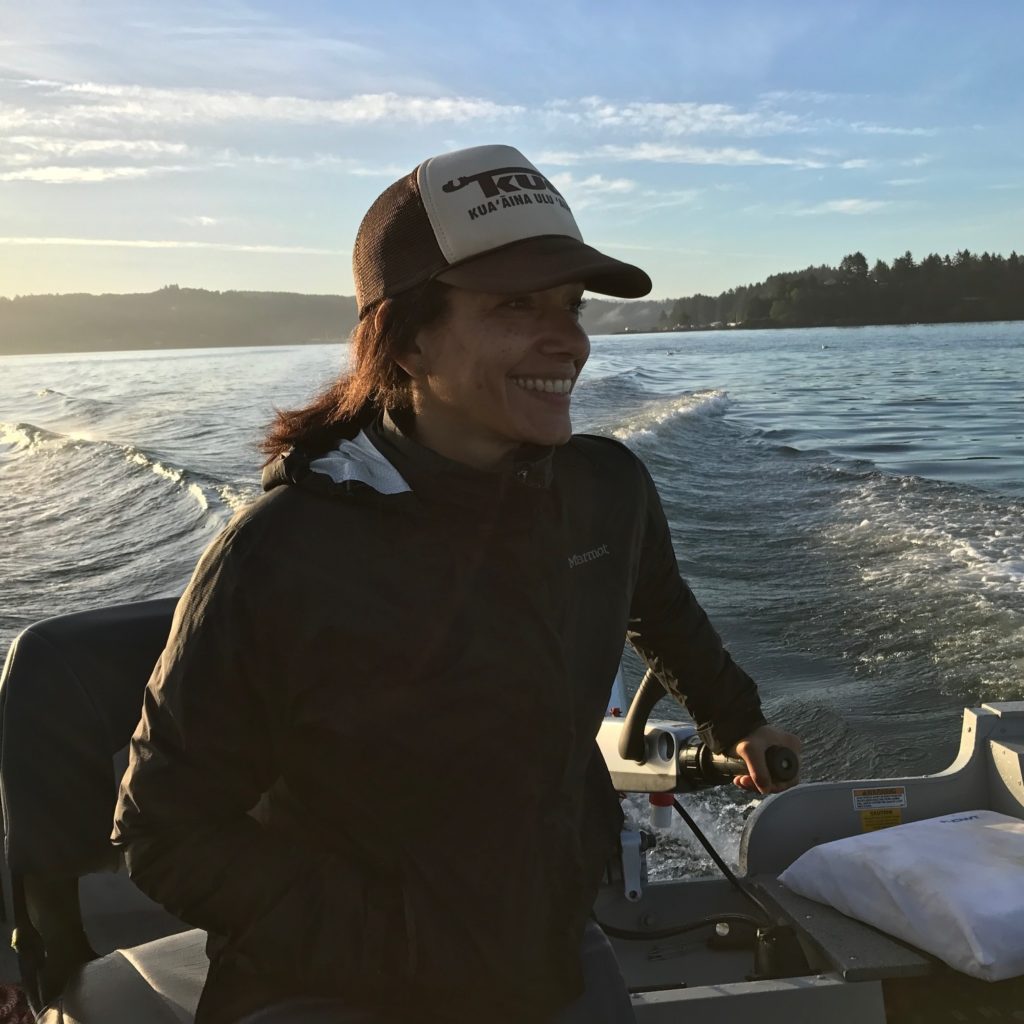 Dr. Ana Spalding is Assistant Professor of Marine and Coastal Policy and Affiliate Faculty at the Pacific Marine Energy Center at Oregon State University. She is also a Research Associate at the Smithsonian Tropical Research Institute (STRI) in Panama as well as at the Coiba Research Station in Panama. Ana received her B.A. in Economics and International Studies from the University of Richmond, her M.A. in Marine Affairs and Policy from the Rosenstiel School of Marine and Atmospheric Science at the University of Miami, and her Ph.D. in Environmental Studies from the University of California, Santa Cruz. Afterwards, Ana conducted postdoctoral research at the STRI in Panama before joining the faculty at Oregon State University.

Life Outside of Science (2:16)
Recently, Ana has been having an amazing time participating in the Corvallis Rowing Club. She used to row in college, and it has been fun to get back into the sport with people from a variety of ages and backgrounds.

The Scientific Side (3:43)
As a social scientist who works in marine and coastal policy, Ana’s research is focused on the intersections of people, the environment, and policies. She is interested in understanding people’s perceptions of the ocean and coast, policy and management frameworks surrounding resource use in these areas, and the major cares, concerns, and conflicts that people have related to coastal areas.

A Dose of Motivation (5:21)
Ana is motivated by the guiding principle of providing a platform to voices that aren’t typically heard in our society or represented in discourse on different issues.

What Got You Hooked on Science? (8:08)
Growing up in an indigenous community in the mountains of Panama, Ana cultivated a deep curiosity for the problems experienced by people in the developing world. Her interests led her to study economics in college, and she was skeptical that the economic models she learned about in class would work across all of the different cultures and developing areas. Spending a year studying abroad in Argentina opened Ana’s mind to the possibilities of political participation and activision surrounding the developing world. She began to appreciate how important natural resources were for developing countries, and she decided to focus her studies on marine and coastal resources. Before beginning her master’s degree program, Ana visited the island of Bocas del Toro in Panama for a research expedition. Sitting on the boat en route to the island, everything seemed to fall into place in her mind. Doing social science research on marine and coastal systems would be a great way to link her interests in the environment, development, and people.

The Low Points: Failures and Challenges (17:22)
In the work that she does, Ana invests a lot of her time and energy in developing relationships and explaining the importance of the human dimensions relevant to the areas she studies. It is incredibly frustrating when other scientists, funders, institutions, and individuals don’t appreciate her work as practically or scientifically important. Ana believes strongly in the value that social science research can provide and the impacts it can have on communities. As a result, challenges in getting support and recognition for her work are difficult on a personal level, but also at a larger scale because they impact communities and people Ana cares deeply about.

A Shining Success! (20:25)
Ana’s recent interdisciplinary collaborations with individuals from multiple institutions to study the impacts of ocean acidification have been an enormous success. Through these collaborations, she has further increased her knowledge of the natural and physical science relevant to this topic, and it has been incredibly rewarding for Ana to share her approach to understanding the social science elements. Ana and her collaborators recently held a workshop on ocean acidification in Oakland, California, and it was phenomenal to see how excited the attendees were about their efforts to bring together multiple different approaches and scientific fields to make progress towards understanding and solving issues related to ocean acidification. Another success for Ana was seeing one of her graduate students participate in an interdisciplinary team as part of a National Science Foundation Research Traineeship program. The students were working on marine reserves in Oregon, and it was wonderful to see these four talented women from very different backgrounds come together to plan and complete such a creative and innovative project.

Book Recommendations (23:57)
A Reason for Hope: A Spiritual Journey by Jane Goodall, Becoming by Michelle Obama, The House of Mirth by Edith Wharton.

Most Treasured Travel (25:51)
Though Panama is among Ana’s favorite places, she has been to so many amazing destinations for science. Recently, Ana travelled to Kuching on the island of Borneo to attend the International Marine Conservation Congress. Her family was able to join her for the trip, and she’ll never forget spending her son’s seventh birthday at Bako National Park watching proboscis monkeys, vipers, and other wildlife. The scientific conference was fantastic, and Ana really enjoyed sampling the local cuisine, reading up on the history of the region, and visiting some of the remarkable natural and cultural sites.

Quirky Traditions and Funny Memories (31:10)
Over the years, Ana has had so much fun with her colleagues, collaborators, and research teams. She recently enjoyed spending time at Bodega Bay working with collaborators on an interdisciplinary project investigating ocean acidification and its impacts. It was amazing to share meals with them, meet their families, and talk to them about topics both within and outside of science. For the past four years, Ana has also worked with other faculty to teach field courses to students at their facility in Newport, Oregon. During the field courses, the faculty stay together in trailers on campus. At least twice per week, they all go out on the water really early in the morning to catch crab and fish. They cook their day’s catch for dinner and spend the evenings eating, talking, and laughing together. Ana has also co-developed a field course on how to conduct social science research. In this field course, she traveled with a group of nine students to Bocas del Toro in Panama. They worked hard conducting research during the day, and then they had fun going to the beach and riding their golf cart into town in their down time.

Advice For Us All (34:49)
Be patient. Also, you should feel connected to and find passion in your work. For aspiring scientists, be creative and think outside of the box. There is a wide range of workplaces that would benefit from your expertise. Remember that academia is one path scientists can pursue, but this isn’t the only path.

Guest Bio
Ana’s research is currently focused on the study of adaptive capacity of resource-dependent communities in California to ocean acidification, and science-policy engagement related to ocean acidification on the West Coast of the United States. Beyond the U.S., she studies the current state and future of Anthropocene ocean governance; particularly as it relates to marine protected areas, the 2030 Agenda for Sustainable Development, narratives around Equity and the Blue Economy, and the role of the ocean in achieving climate and societal goals. Outside of work, Ana is either hanging out with her two kids and husband, rowing with the Corvallis Rowing Club, or trying to train the newest addition to her family, the Tutty dog.