Listen to the Episode Below (00:44:58)
Play / pause
1x
1.5x
2x
0:00
0:00
00:44:58
volume
iTunesGoogle PlayShare Leave a ReviewClammr ItListen in a New WindowDownloadSoundCloudStitcherSubscribe on AndroidSubscribe via RSS
Sign up to receive bonus content about our guests and sneak peeks for a guest from the next week’s interviews! 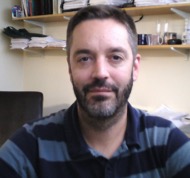 Dr. Camron Bryant is an Assistant Professor of Pharmacology and Psychiatry as well as Director of the Laboratory of Addiction Genetics at Boston University. Camron received his undergraduate degree in psychology from the University of Illinois at Urbana-Champaign, and he was awarded his PhD in neuroscience from the University of California, Los Angeles. He conducted postdoctoral research in genetics and worked as a Research Associate at the University of Chicago before joining the faculty at Boston University in 2012. Camron is the recipient of the Achievement Award for College Scientists, the International Behavioral and Neural Genetics Society Outstanding Young Investigator Award for Postdocs, and the American College of Neuropsychopharmacology Travel Award. Camron joined us for an interview to discuss his experiences in life and science.

Life Outside of Science (2:24)
In recent years, Camron has rekindled his interest in snowboarding and skateboarding. He also started cycling more seriously as a postdoctoral fellow, and cycling to work has become part of his regular routine, even in the winter. Another passion for Camron is going out to eat and enjoying the many awesome restaurants in his neighborhood.

The Scientific Side (5:57)
Camron’s lab is investigating the genetic basis of addiction using behavioral neuroscience and genetic approaches. They try to locate regions of the genome in model organisms that are associated with changes in behavior they think are important for addiction. Next, they narrow the regions of interest further and further until they can identify a single gene that influences a particular behavior. Once they discover the relevant gene, they can start to understand the function of that gene using genetic tools such as genome editing. The disorders Camron studies range from binge eating to opioid and methamphetamine addiction.

A Dose of Motivation (8:18)
“If the wind changes direction, sometimes you need to adjust your sails.”
“Do, or do not. There is no try.” – Yoda

What Got You Hooked on Science? (12:37)
Though Camron’s parents bought him a small telescope and a chemistry set when he was a kid, he wasn’t particularly interested in science when he was young. In high school, psychology and sociology caught Camron’s attention, but he wasn’t able to take any classes on these subjects because they were among the most popular courses at his school. He did take a high school course in chemistry with a lab. It didn’t go well, and Camron told himself then that he would never pursue a career that involved working in a lab. Camron took numerous psychology classes in his first few years of college, but he began to become more and more interested in neuroscience. In particular, there were a few lectures in a course he took his sophomore year that sparked his interest in psychopharmacology. Unfortunately, this meant struggling through more chemistry and biology courses. Camron persevered, and he has gone on to become a successful scientist.

The Low Points: Failures and Challenges (24:15)
In his projects as a postdoctoral fellow, Camron identified regions of the genome associated with certain addiction-related behaviors. These were relatively easy to identify, but from there, he had to narrow the regions down to specific genes that were associated with those behaviors. They used breeding strategies in mice to narrow down their regions of interest in the genome to bring them closer to identifying individual genes. However, in the process, the phenotype (in this case, the behavior of interest) went away in the new generations of mice. This meant that the picture was more complicated than they originally hoped. The same problem occurred in another separate project he was working on looking at a different region of the genome. After reviewing his data and adding more markers, Camron discovered that there was a region of the genome that he had missed, and he decided to start from scratch to investigate this particular region. It took another few years, but they were finally able to identify the specific gene for the behavior of interest. This victory was really important because it came at a low point in the middle of Camron’s fellowship where he was starting to wonder if any of these genetic mapping projects were going to work.

A Shining Success! (28:59)
The challenging project mentioned above ended in an exciting success when Camron was finally able to identify the gene that controlled the behavior of interest. This project was ten years in the making, so he was really eager to get the paper published. Since publishing that paper, they discovered the gene is not only involved in locomotor behavior induced by methamphetamine, but it is also more broadly involved in behaviors directly relevant to addiction, including reward and reinforcement. Their follow-up experiments may help identify potential therapeutic targets that may be useful in the future to treat addictive behaviors. This project is still in process, but Camron hopes their next paper will make a splash in the addiction field.

Book Recommendations (4:25)
The Subtle Art of Not Giving a F*ck: A Counterintuitive Approach to Living a Good Life by Mark Manson

Most Treasured Travel (31:45)
Cameron traveled to Hawaii for a conference of the American College of Neuropsychopharmacology (ACNP). He had just gotten married before the trip and was also really excited to have been awarded the prestigious ACNP travel award during the organization’s 50th anniversary. The conference was held on the Big Island of Hawaii for about five days. After the conference, Camron and his wife went to a wonderful bed and breakfast near one of the best snorkeling spots on the island. They rented a car and experienced firsthand the multitude of climate zones as they explored the different areas of the Big Island.

Quirky Traditions and Funny Memories (34:05)
Every summer, Camron’s lab gets together for a barbecue at his house. They usually have trainees visiting from different universities who come from different backgrounds, so it is important to get everyone together and build camaraderie. The group also has big celebrations when people move on from the lab. When Cameron’s first lab manager departed for medical school, they had a bowling party with catered food. In addition, in the winter they have an annual holiday party, and they also started a tradition of going on a Vermont ski trip with another lab in their department.

Advice For Us All (40:23)
Keep reading the literature, and don’t just read articles that are directly related to your work. Reading is what leads to inspiration. Always have a project is working and another project that you are truly passionate about. Make sure to take some time out for yourself and disconnect. This can also lead to inspiration. Though people may claim otherwise, there is no such thing as work life balance. The demands of work and aspects of your life outside of work are in constant state of flux. Also, ask the hard questions in science. They may take the longest to answer, but they are the most interesting.

Guest Bio
Camron heads the Laboratory of Addiction Genetics and is an Assistant Professor of Pharmacology and Psychiatry at Boston University School of Medicine. The Laboratory of Addiction Genetics integrates classical forward genetics in mice with contemporary genome editing and transcriptomics to understanding the mechanisms that confer susceptibility versus resistance toward the addictions. The Bryant Lab develops and refines behavioral models across multiple abused substances that most directly gauge the contribution of natural genetic variation to behavior and bridging these discoveries with –omics and molecular genetics to validate candidate genes, functional variants, and neurobiological mechanisms. This multi-pronged approach leverages the ability to make discoveries that could translate into new pharmacotherapeutic avenues for treatment and prevention. Since starting his lab in 2012, Camron has identified several genes underlying addiction traits in mice, including genes influencing opioid reward, binge eating, and the stimulant properties of methamphetamine. Recently, he was elected as an Associate Member in the American College of Neuropsychopharmacology in 2016. Camron has successfully mentored two Ph.D. students and is currently mentoring four Ph.D. students in areas that include pharmacology, genetics and genomics, and neuroscience. In his time away from science, Camron enjoys snowboarding, skateboarding, cycling, fine dining, and reading about these various hobbies.