Listen to the Episode Below (00:38:59)
Play / pause
1x
1.5x
2x
0:00
0:00
00:38:59
volume
iTunesGoogle PlayShare Leave a ReviewClammr ItListen in a New WindowDownloadSoundCloudStitcherSubscribe on AndroidSubscribe via RSS
Sign up to receive bonus content about our guests and sneak peeks for a guest from the next week’s interviews! 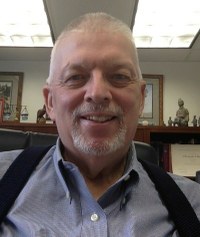 Dr. Don Bryant is the Ernest C. Pollard Professor in Biotechnology and Professor of Biochemistry and Molecular Biology at The Pennsylvania State University. Don completed his undergraduate training in Chemistry and Biology at the Massachusetts Institute of Technology and received his PhD in Molecular biology from the University of California, Los Angeles. He was awarded an NSF-CNRS Postdoctoral Fellowship to conduct research at the Institut Pasteur in France, as well as a DOE Postdoctoral Research Fellowship at Cornell University, before joining the faculty at Penn State. During his career, Don has received many awards and honors. He is a Fellow of the American Association for the Advancement of Science, a Fellow of the American Academy of Microbiology, an Elected Member of the Board of Governors of the American Academy of Microbiology, as well as a Member of the Board of Directors for the Rebeiz Foundation for Basic Research. Don is here with us today to tell us all about his journey through life and science.

Life Outside of Science (2:25)
In addition to being passionate about his research, Don is passionate about photography. In particular, he enjoys photographing birds of prey, and he has traveled all over the world to capture photos of these magnificent creatures. Don also participates in raptor monitoring in Pennsylvania during fall migrations to help track and count birds of prey.

The Scientific Side (5:32)
Don describes himself as a microbial physiologist. He studies the structures and biochemistry of photosynthetic bacteria and how those structures relate to cellular function, cell growth, and the ability of these bacteria to interact with other bacteria. One area of Don’s research examines the ecology and physiology of photosynthetic bacteria and bacterial communities in hot springs in Yellowstone National Park.

What Got You Hooked on Science? (9:40)
Growing up on a dairy and tobacco farm in rural Kentucky, becoming an academic professor wasn’t initially at the top of Don’s mind. When he was about 10 years old, Don read about MIT being one of the best schools in the country, and he made up his mind to go to college there. There were a lot of people, including his high school academic counselors, who thought he couldn’t do it, but Don attended MIT, became interested in photosynthetic bacteria, and graduated with honors. He has worked on these fascinating organisms ever since.

The Low Points: Failures and Challenges (19:05)
This year has been particularly difficult for Don. He was diagnosed with colorectal cancer and has endured chemotherapy, radiation therapy, multiple surgeries, and a near-death experience due to three ruptured arteries. During this time, he maintained his lab, successfully renewed multiple grants, and wrote a paper that was published in the journal Science.

A Shining Success! (23:30)
Don’s lab discovered a new process in which photosynthetic bacteria are able to use longer wavelengths of light than those used by other organisms to conduct photosynthesis. His group determined that these bacteria use a different form of chlorophyll (chlorophyll f). Recently, they identified the enzyme these bacteria use to produce chlorophyll f, and both of these discoveries have been published in the journal Science. In addition to his success in research, Don is proud of all of the students and postdocs he has trained over the years.

Most Treasured Travel (25:35)
From 2010 to 2011, Don spent a year on sabbatical in Montana, and this was a really special time. He was close to Yellowstone National Park, and this gave him the opportunity to combine his scientific and photographic interests. He was able to take pictures of bears, moose, and birds of prey throughout the year across all the seasons. The science he was working on was great, they published many papers, and it was exciting to work on an old problem in the field that had remained unanswered for about 50 years.

Quirky Traditions and Funny Memories (29:15)
Though Don doesn’t really have any quirky traditions in his current lab, in his postdoctoral lab in Paris, they had an enforced tradition of stopping work every afternoon around 4:00 pm for mandatory tea time. No matter what you were doing, you stopped for about 15 minutes to have tea. Don’s mentors used this time to interact with the group and catch up on what was going on in the lab.

Advice For Us All (35:08)
It’s better to be lucky than to be good. In particular, it is critical in science to be able to recognize when something is abnormal or different because that might be the first step to an important discovery. Hard work will generally succeed over raw intellect, and working hard is just as important as being smart. A good educational foundation is key in science, and you will need to learn how to learn, rather than just memorize facts.

Guest Bio
Photosynthesis, the chlorophyll-dependent conversion of light energy into chemical energy with the ensuing reduction of carbon dioxide to biomass, is arguably the most important biological process on Earth. Among prokaryotes, the ability to use chlorophylls to capture and convert light into biochemical energy was until very recently believed to occur in members of only five eubacterial kingdoms: Cyanobacteria, Proteobacteria, Chlorobi, Chloroflexi, and Firmicutes. Don and his colleagues have recently discovered and characterized a previously unknown chlorophototroph, Chloracidobacterium thermophilum, which is a member of the poorly characterized kingdom Acidobacteria. Current research in Don’s laboratory focuses on a wide variety of topics in photosynthesis, including structure-function relationships of proteins, biogenesis of the photosynthetic apparatus, gene regulation, and photosynthetic physiology. He principally studies two model organisms, the unicellular, euryhaline cyanobacterium Synechococcus sp. PCC 7002 and the moderately thermophilic green sulfur bacteria Chlorobaculum tepidum and Chlorobaculum phaeobacteroides (Chlorobi), which can easily be manipulated genetically. Because Cyanobacteria perform oxygen-evolving photosynthesis but characterized Chlorobi are obligately photoautotrophic anaerobes, these two organisms provide an interesting contrast in physiology and metabolism. His group also studies natural phototrophic communities in Yellowstone National Park. Long-term objectives of Don’s laboratory are to understand the structure, function, assembly, and regulation of expression of bacterial photosynthetic apparatuses, principally those of members of the phyla Cyanobacteria and Chlorobi. To achieve these goals, they have obtained complete genomic sequences for all of the organisms we study and use nextGen RNA sequencing methods for profiling transcription and gene expression patterns. In addition to his passion for studying photosynthesis, Don is passionate about photography, bird-watching, and photographing raptors.