Listen to the Episode Below (00:42:35)
Play / pause
1x
1.5x
2x
0:00
0:00
00:42:35
volume
iTunesGoogle PlayShare Leave a ReviewClammr ItListen in a New WindowDownloadSoundCloudStitcherSubscribe on AndroidSubscribe via RSS
Sign up to receive bonus content about our guests and sneak peeks for a guest from the next week’s interviews! 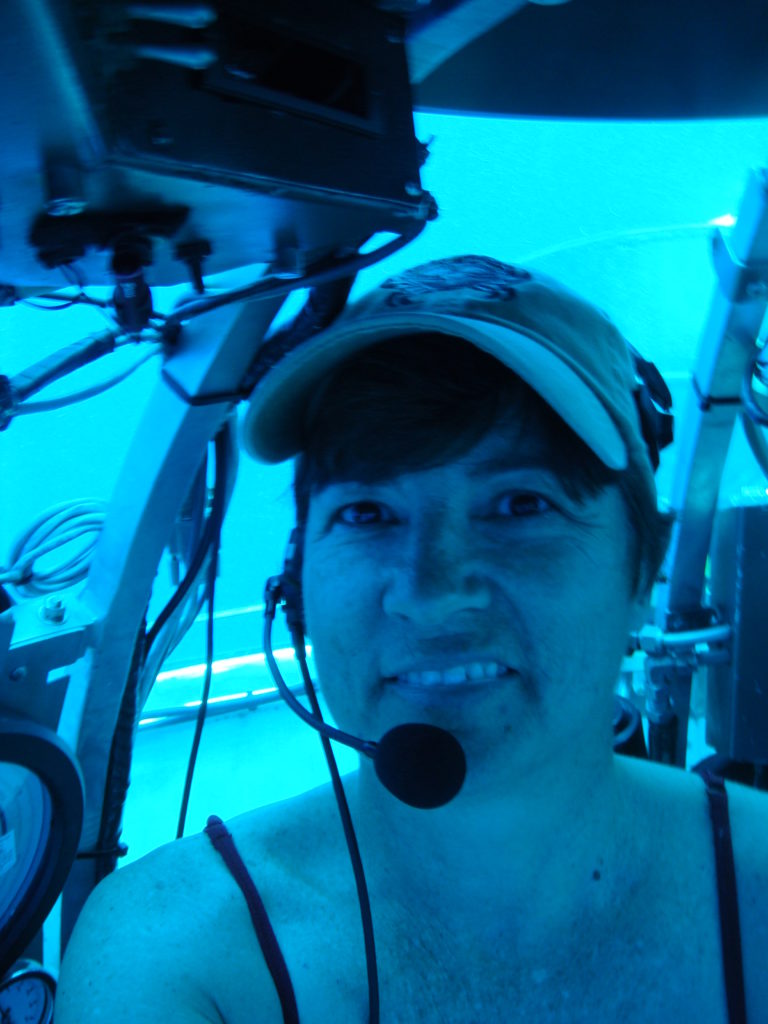 Dr. Edith Widder is Co-Founder, CEO, and Senior Scientist at the Ocean Research & Conservation Association (ORCA), a scientific based conservation nonprofit. Edie received a BS in Biology from Tufts University and worked as a Laboratory Technician at Harvard Medical School before enrolling in graduate school. She attended UC, Santa Barbara where she earned a MS in biochemistry and a PhD in Neurobiology. Prior to founding ORCA, Edie worked for 16 years as a senior scientist at Harbor Branch Oceanographic Institute. Edie has received numerous awards and honors throughout her career, including a MacArthur Fellowship, the 2018 Explorers Club Citation of Merit, Induction into the Women Diver’s Hall of Fame, and Certifications as a research pilot for single-person submersibles, including wasp, Deep Rover, and Deep Worker. Edie also has the honor of having her underwater images featured on seven of the ten recently released bioluminescence stamps from the U.S. Postal Service. In our interview, Edie shares more about her life and science.

Life Outside of Science (2:38)
When Edie isn’t doing science, she loves immersing herself in nature through hiking and kayaking. She also enjoys visiting museums, especially art museums.

The Scientific Side (3:17)
ORCA aims to find upstream solutions to the pollution problems that are plaguing our oceans. They use science-based approaches to determine where pollution is coming from and what can be done to stop it.

A Dose of Motivation (4:56)
“Success in life depends on how well you handle plan B. Anyone can handle plan A.”

What Got You Hooked on Science? (6:55)
Edie has always been drawn to nature and enjoyed being outside. However, she hated school because she thought it was boring. Both of Edie’s parents had PhDs in mathematics, and she had an opportunity to travel all over the world with them on sabbatical when she was eleven years old. During this year abroad, Edie saw so many amazing things and contemplated many different careers. After spending some time climbing trees with koalas and exploring Australia, Edie traveled with her family to Fiji. While there, Edie had the chance to see a coral reef. This experience convinced her that she wanted to be a marine biologist. This fascination with ocean life stayed with her through high school, but when she went to college, Edie realised that the path to becoming a marine biologist wasn’t clearly defined. She decided to learn more about animal physiology so she could study marine animals. After college, Edie worked in a lab for a few years to get more research experience and decide if this was the right career path for her. She chose to enroll in graduate school to study neurobiology. Specifically, Edie studied bioluminescence in a type of marine plankton. Her thesis research led to exciting opportunities for Edie to participate in ocean research expeditions and ultimately become a deep sea explorer and submersible pilot.

The Low Points: Failures and Challenges (19:43)
It was really difficult for Edie to get her Eye-in-the-Sea camera system funded. This camera system is an unobtrusive way to observe ocean creatures behaving in the absence of divers. Traditional funding sources weren’t successful because they didn’t appreciate what could be discovered with this device. After trying a variety of other foundations, she finally found a solution. Edie was able to scrape together funding and expertise from a variety of sources to get the initial prototype of the device built. The first test of the device occurred on an expedition in the northern part of the Gulf of Mexico. It was amazing to see the animals behaving in their environment unbothered by the red light illumination of the camera. Very shortly after they activated their electronic jellyfish optical lure, their camera recorded a six foot long squid that was completely new to science. It was thrilling! This discovery led to Edie receiving additional funding to create a more sophisticated version of this camera system.

A Shining Success! (24:15)
ORCA is interested in developing different ways to track pollutants back to the source. Recently, they had a case where a nearby lake developed a massive toxic blue green algae bloom. This was particularly troubling because this lake is in a relatively undeveloped area, and it has the highest concentration of osprey nests of anywhere in the world. Edie and her team conducted testing to discover the very high levels of toxins, and they showed that this toxin was transferring to the fish in the lake. Their sampling also revealed high concentrations of artificial sweeteners and pain relieving drugs in the water. Based on their data, they traced the contamination back to the spreading of biosolids on nearby ranchland. The data from this study helped contribute to policy changes that prohibited the spreading of biosolids around the lake. This was a really rewarding success.

Book Recommendations (27:58)
Becoming by Michelle Obama; The Man Who Mistook His Wife for a Hat: And Other Clinical Tales by Oliver Sacks; Life, Animated: A Story of Sidekicks, Heroes, and Autism by Ron Suskind; The Pleasure of Finding Things Out by Richard Feynman, Below the Edge of Darkness by Edith Widder (soon to be released).

Most Treasured Travel (29:25)
In the northern part of the Gulf of Mexico, there is an amazing underwater feature called a brine pool. This area looks like an underwater lake, but it is made of very heavy, salty water that does not mix with the overlying sea water. Within these pools, there can be methane and other compounds bubbling up through cracks in the sea floor. The brine pools are home to bacteria and other organisms like mussels, but they are toxic to most fish. Edie dove in a submersible at the site of one of these brine pools, and it was one of the most remarkable things she has ever seen. When Edie tried to breach the surface of the lake with the submersible, she couldn’t because the water of the brine pool was too dense. However, the submersible generated slow motion waves that lapped against the shore of the underwater lake.

Quirky Traditions and Funny Memories (32:33)
One of the dive suits that Edie uses is made of aluminum, so it gets pretty cold in the suit when you are deep in the ocean. Despite wearing a wool cap and multiple layers, she would come up from a four hour dive with her lips blue and teeth chattering. One of the old divers who ran the dives finally pulled her aside. He said he would tell her his secret if she promised not to tell his colleagues. His secret to keeping warm was wearing pantyhose! To this day, Edie still wears pantyhose to keep warm while diving. In another situation, Edie and her colleagues were struggling to keep their jellyfish optical lure in the camera field of view when they were recording data. They were frustrated that they were missing key footage that was just out of frame. Edie decided they would work with engineers when they returned to develop a frame system to address this issue, and she went to bed for the night. However, a graduate student and a colleague convinced the captain to let them use an old aluminum ladder, and they stayed up all night fashioning a hacked together folding frame system. Surprisingly, it worked perfectly. The first time they used it, they filmed a giant sixgill shark coming in for the bait, and everything was perfectly centered in the camera field of view. The folding frame was dubbed CLAM because it folds up, and because it’s an acronym for Cannibalized Ladder Alignment Mechanism.

Advice For Us All (39:35)
If you care about it, don’t throw it into the ocean. This was particularly poignant when Edie was on an expedition to deploy an instrument she had worked really hard to develop. Watching her instrument being lowered off the side of the ship was agonizing. However, it is important to find a sense of peace in these moments and embrace a willingness to fail. Also, we are facing so many challenges today. If you see something wrong, don’t assume someone else is going to fix it. Step up.

Guest Bio
Edie’s distinguished career as a deep sea explorer has taken her to some of the most remote and inhospitable places on earth, places 3,000 feet beneath the surface of the ocean where pressures exceed 1,300 pounds per square inch. She has made hundreds of deep dives in her career, both as passenger and pilot. Many of her exciting exploits have been featured in BBC, PBS, Discovery Channel, and National Geographic television productions. Her main purpose for braving these dangerous depths is the pursuit of her passion, the study of how the ocean’s inhabitants use light of their own making, called bioluminescence, to help them survive in the dark depths. This passion has led her to develop new ways to explore the deep sea and her innovations have produced many observations of animals and behaviors never seen before, including the first video of a giant squid filmed in its natural habitat. In order to help save and protect the ocean she loves, in 2005 Edie helped found the Ocean Research and Conservation Association, also known as ORCA. ORCA is the world’s first technology focused, marine conservation, not-for-profit. Their tagline, which is Mapping Pollution, Finding Solutions, describes their team’s results-driven approach to meeting some of the greatest challenges our ocean planet is currently facing.