Listen to the Episode Below (00:48:28)
Play / pause
1x
1.5x
2x
0:00
0:00
00:48:28
volume
iTunesGoogle PlayShare Leave a ReviewClammr ItListen in a New WindowDownloadSoundCloudStitcherSubscribe on AndroidSubscribe via RSS
Sign up to receive bonus content about our guests and sneak peeks for a guest from the next week’s interviews! 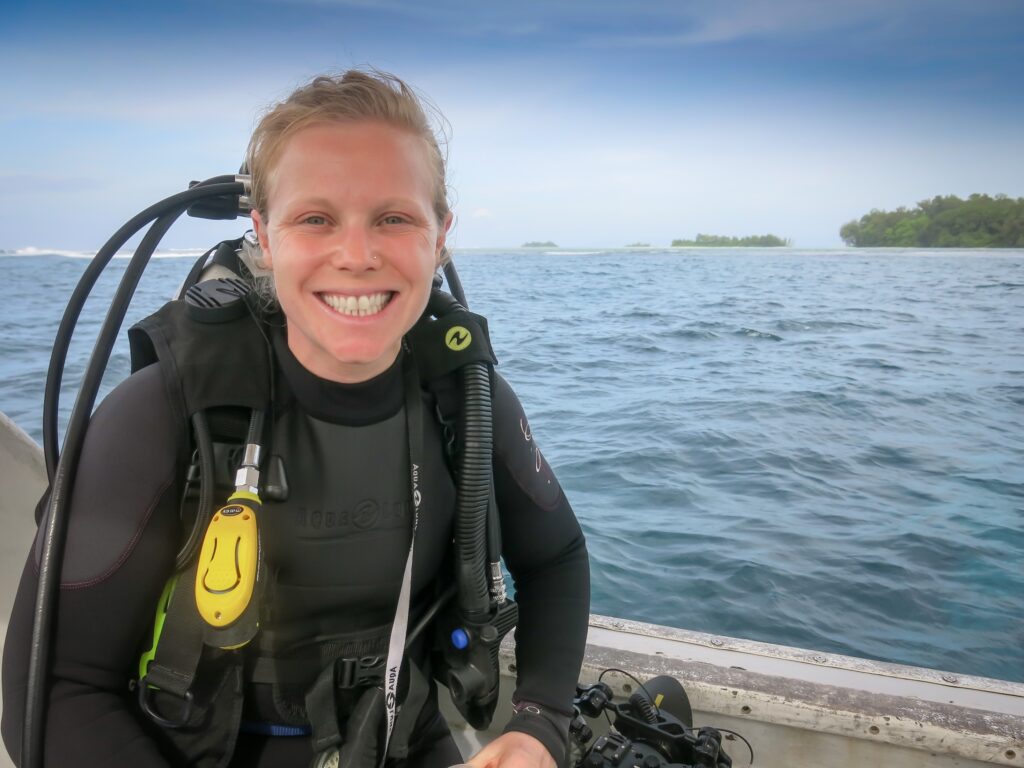 Dr. Emily Darling is Director of Coral Reef Conservation at the Wildlife Conservation Society (WCS) and an Adjunct Professor in the Department of Ecology and Evolutionary Biology at the University of Toronto. Emily received her B.Sc. Degree in Biology from Queen’s University and her PhD in Marine Ecology and Conservation from Simon Fraser University. Afterwards, she was awarded the David H. Smith Conservation Research Fellowship to conduct postdoctoral research at the University of North Carolina at Chapel Hill. Subsequently, Emily was awarded a Natural Sciences and Engineering Research Council (NSERC) Banting Postdoctoral Fellowship to work at the University of Toronto. Emily has been awarded the Early Career Scientist Award from the International Coral Reef Society and the Early Career Award from the Canadian Society for Ecology and Evolution. In this interview, Emily shares more about her life and science.

Life Outside of Science (2:30)
When she’s not working, Emily loves having fun outdoor adventures with friends. She was an avid rock climber in the past, and she has more recently joined a community sailing club. Lately, Emily has been exploring the Great Lakes on her new sailboat with her puppy Jayne.

The Scientific Side (4:25)
Emily’s research focuses on how coral reefs around the world will survive climate change. She examines the different types of corals that are on a reef, as well as the patterns of disturbance, recovery, and influences of climate change. Emily works with large datasets, conducts underwater field research, and works with other researchers, local communities, fishers, governments, and policy experts to try to understand and conserve coral reef communities.

A Dose of Motivation (6:01)
“There is a special place in hell for women who don’t help other women.” – Madeleine Albright

What Got You Hooked on Science? (10:56)
When she was eight years old, Emily became fascinated with fish. At that time, she was living in Indonesia, and her father worked at one of the museums there. While learning Indonesian grammar was a struggle, Emily picked up numbers quickly, and her parents allowed her to visit the local markets to shop and bargain with the locals selling fruits, vegetables, and other foods. When Emily ventured to the back corners of the market, she was blown away by the variety of octopus, squid, and brightly colored fish she saw there. She was amazed that these incredible creatures lived in the nearby ocean and helped fuel the vibrant local markets. This sparked Emily’s interest in fish and the ocean, and her interests were further solidified during college when she took a coral reef field ecology course. As part of the course, Emily learned about corals, sampled transects, and performed surveys at a field station in Belize. She enjoyed it so much, she stayed on after the course to work as a research assistant. Emily decided she wanted to continue studying fisheries and coral reefs, and she has been passionate about this research ever since.

The Low Points: Failures and Challenges (23:40)
During graduate school, Emily helped develop a project that involved transplanting corals from a marine park in Kenya to reefs outside of the marine park. The goal was to understand how the fish within the protected marine parks may be helping corals grow. This was her first big experiment, and after long months of planning, Emily was excited to start. As the project unfolded, Emily faced a frustrating string of failures. The corals they collected died, they temporarily lost mesh nets full of their study corals at sea (though they were later recovered!), and it was extremely challenging to attach the corals to the reef for the transplants. Ultimately, they weren’t able to answer the question they set out to answer, but Emily still learned some valuable lessons. Through conversations with a local fisherman, she realized that her project wasn’t asking the best and most useful question to begin with. Scientists don’t necessarily always have to come up with their own research questions. People in the local communities they are working with have important insights and can help identify the most critical issues they are facing related to their reefs and the fish there.

A Shining Success! (30:27)
Emily recently participated in the United Nations Oceans Conference in Lisbon, Portugal. This was her first United Nations Conference, and it brought together governments, non-governmental organizations, policy experts, conservation practitioners, and scientists who were all focused on solving global issues involving our oceans. As part of this conference, Emily and her colleagues organized a side event on blue foods for coral reefs. Blue foods are sources of food from aquatic environments, and they were specifically interested in what people eat from coral reefs, and what nutrition people get from small fisheries that use coral reefs. The speakers at the event included funding organizations and individuals involved in local fishing communities and related organizations. Emily is passionate about bringing together various perspectives from different people to figure out how we can save the world, so this was a particularly meaningful event, and it was a major success.

Book Recommendations (33:47)
The Expanse Series by James S. A. Corey, The Flying Troutmans by Miriam Toews, and Sea of Tranquility by Emily St. John Mandel

Most Treasured Travel (34:59)
A particularly memorable trip for Emily was a visit to the Solomon Islands with Stacy Jupiter, a fellow Wildlife Conservation Society scientist. This experience opened Emily’s eyes to a new context and way of thinking about and doing conservation in the Pacific. She was surprised to discover that they did not have a word for conservation in their language there because it is so ingrained in the culture to take care of resources and make sure they are there for future generations. The scenery was stunningly beautiful, and it was amazing to survey the coral reefs there and spend time with the wonderful people in the village of Munda. Emily will never forget their morning ritual of sipping coffee while watching the resident saltwater crocodile (affectionately named “Bob”) return to the river after the previous night’s hunt on the reef.

Quirky Traditions and Funny Memories (40:14)
In graduate school, Emily and her labmates worked hard and did great science, but they always had fun as well. One winter, Emily helped with another student’s research project that involved diving experiments in the Bahamas. The ocean around the Bahamas was cold in January, but Emily was feeling extra prepared with the 14 mm ultra thick wetsuit she packed. The group had a tradition of performing a dance off as they loaded up all their gear and supplies into the boat, and there was one day where (in the heat of the dance-off), Emily forgot to load her wetsuit onto the boat. She didn’t notice her wetsuit was missing until they were already at the dive site, and there was no time to go back for it. Fortunately, Emily only had to do short 5-7 minute dives, but it was cold! They  joked that she could continue dancing underwater to keep warm, and that memory has stayed with her over the years.

Advice For Us All (45:40)
It’s not a zero sum game. If other people are winning, it doesn’t mean that you are losing. You’re not competing against everyone else. You can work together, collaborate, and everyone can contribute. There is so much to be gained by working with others, celebrating their successes, and having others celebrate your accomplishments as well.

Guest Bio
Emily’s research focuses on how coral reefs will survive climate change. Along the way, she’s worked with Kenyan fishers on food security, social scientists on the connections between people and conservation, and software engineers on a new technology for coral reef data called MERMAID. Trained as a plucky field biologist and inspired by fish markets from an early age, Emily is passionate about the importance of connecting underwater science to the people who manage their ocean resources. She is inspired every day by the scientists she works with around the world to measure the impact of coral reef conservation, and is passionate about improving opportunities for equity in conservation (pro tip: there’s still work to be done). In her spare time, she is (still) learning to sail, reads sci-fi, and lives on a 39’ sailboat called Lor’ Tunderin with her beloved if often mischievous first mate, Jayne the puppy.