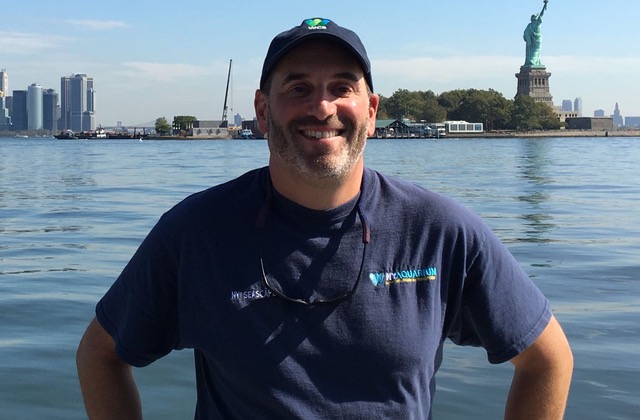 Dr. Howard Rosenbaum is a Senior Conservation Scientist and Director of the Wildlife Conservation Society’s Ocean Giants Program, which aims to secure the future of whales, dolphins, and other marine species. He is also a Senior Scientist at the American Museum of Natural History, core faculty member at Columbia University in the Ecology, Evolution, and Environmental Biology Department, a member of the International Union for Conservation of Nature (IUCN) Cetacean Specialist Group and Important Marine Mammal Areas Task Force, and a member of the International Whaling Commission’s Scientific Committee. In addition, Howard is a member of New York’s (NYSERDA) Environmental Technical Working Group and on the Specialist Committee for Best Management Practices related to Offshore Wind Development. He has also been a subject matter expert for two past BOEM workshops related to marine mammals and Offshore Wind Development, an invited member of the Regional Wildlife Science Entity’s Marine Mammal subcommittee, and he recently served on IUCN’s panel on Mitigating Biodiversity Impacts to Wind Energy Development. Howard received his undergraduate degree from Hamilton College and afterwards spent two years conducting research as a recipient of a Thomas J. Wat­son Fel­low­ship. Next, he enrolled in graduate school at Yale University where he was awarded his Ph.D. in biology. Upon graduating, Howard began a postdoctoral fellowship with the Wildlife Conservation Society and the American Museum of Natural History where he would ultimately continue working for over 20 years. In this interview, Howard shares more about his life and science.

Life Outside of Science (2:30)
When he’s not working, Howard loves spending time outdoors. Some of his favorite outdoor activities are skiing in the winter, cycling, kayaking, sailing, going for walks with his dog, and spending time with his wife and kids out in nature.

A Dose of Motivation (4:28)
When things are difficult or stressful, try to see the big picture. Don’t get bogged down in the small details.

What Got You Hooked on Science? (6:15)
From a young age, Howard enjoyed spending time outdoors hiking, camping, and watching whales and other wildlife off the coast of Long Island where he grew up. His mother was instrumental in nurturing his curiosity and love of nature. Over the years, Howard pursued opportunities as they arose, including a program at Cold Spring Harbor Laboratory, programs at his high school, and research experiences in college. After graduating, Howard had the opportunity to conduct his own research project studying whales around the world through the Watson Fellowship Program. This served as a springboard for Howard to launch his independent research career, learn cutting-edge research techniques, and develop valuable collaborations.

The Low Points: Failures and Challenges (20:09)
After spending so much time working overseas during the first 20 years of his career, Howard is excited to be studying and contributing to conservation efforts for whales and dolphins off the coast of New York (in the New York Bight). One challenge that has arisen in this work is that the public, funders, policy-makers, and others have the perception that there aren’t whales and dolphins in the New York Bight, and thus issues related to their conservation aren’t relevant in that area. These biases have made it difficult for Howard and his team to do their science, but little by little, they have been able to make progress and start changing people’s minds. Successes in setting up collaborations, getting funding, and publishing their work have all been building towards their goal of ensuring their science can have the greatest impact in terms of informing policy and evidence-based decision making.

A Shining Success! (23:57)
When Howard led his first research expeditions in Madagascar in the mid-1990s, he didn’t know what he was going to find there. The area had a long history of commercial whaling, and Howard was surprised to discover an important breeding area off the northeast corner of Madagascar. He wrote a paper about their findings, and this was a major win. As an early-career scientist, he was thrilled to be writing articles that were featured in popular media outlets like Natural History Magazine and Wildlife Conservation Magazine. Howard will never forget when his graduate school advisor told him that this was just the beginning, and that throughout his career, Howard should expect to have at least ten discoveries of this magnitude. Since his early work in Madagascar, Howard has indeed had many exciting research successes, and he and his colleagues continue to do groundbreaking work in the field.

Book Recommendations (27:53)
Endurance by Alfred Lansing and other historical non-fiction accounts of larger than life characters.

Most Treasured Travel (29:11)
Over the course of his career, Howard has had so many opportunities to travel, see the world, experience different cultures, and meet amazing people. His work has taken him to Africa, Asia, South America, Central America, the Arctic, and the Antarctic. In each place, he tries to take a photographic snapshot in his mind. Some of the most memorable mental snapshots he has collected include seeing the amazing wildlife and scenery in Alaska with his family, watching wildlife with colleagues in Patagonia, and living with lemurs on an uninhabited island during his first research expeditions off the coast of Madagascar.

Quirky Traditions and Funny Memories (31:25)
Being a part of the career journeys of his trainees and staff has been a fun and rewarding part of Howard’s career. His research group truly feels like a team. Whether it’s someone’s first research paper or many papers later, it always feels like a big team win when they get the notification that a paper is accepted for publication. Once their work has been reviewed by peers and published, they can start to use the new knowledge they generate to affect change and influence real-world conservation goals and outcomes.

Advice For Us All (38:14)
When you’re working hard and you are frustrated at your lack of progress, ask yourself: “Do you want to know the answer, or do you feel like you have to know the answer?” These are two very different things. Take the time to reflect and ensure that you are spending your time on what you think is most important. We place such high demand on excellence, especially in science. You have to be happy, invested in your work, and like what you’re doing to produce the best quality work.

Guest Bio
Howard has more than 25 years experience in marine mammal research and conservation activities involving a number of large whale and dolphin species. His research interests involve the application of current techniques in molecular biology to the conservation of wildlife. This conservation genetics research is focused at different hierarchical levels ranging from evolutionary relationships between taxa to determination of relatedness among individuals within populations. The results of these detailed theoretical and empirical studies are subsequently applied to guide conservation decision-making and priority setting. His main areas of research focus on population genetics, systematics, biogeography, and conservation of cetaceans, ranging from large baleen whales to small cetaceans. One area of his research involves the examination of population structure, migration links, and social organization of humpback whales (Megaptera novaeangliae) throughout the Indian and South Atlantic Oceans, and more comprehensively throughout the entire Southern Hemisphere. These studies integrate genetic analyses (high-throughput sequencing and multi-locus genotyping), with extensive field surveys and life history data collected from natural populations of whales off the coasts of Madagascar, Gabon, and elsewhere in these oceans. Dr. Rosenbaum and a global team have also recently completed a range wide genetic analysis of bowhead whales that includes populations from Russia and Alaska. In the New York Bight, he leads WCS’s efforts for research and conservation of marine mammals, which includes a collaborative effort to use state-of-the-art near real-time acoustic monitoring and other technologies to study whales and ocean noise.