Listen to the Episode Below (00:32:12)
Play / pause
1x
1.5x
2x
0:00
0:00
00:32:12
volume
iTunesGoogle PlayShare Leave a ReviewClammr ItListen in a New WindowDownloadSoundCloudStitcherSubscribe on AndroidSubscribe via RSS
Sign up to receive bonus content about our guests and sneak peeks for a guest from the next week’s interviews! 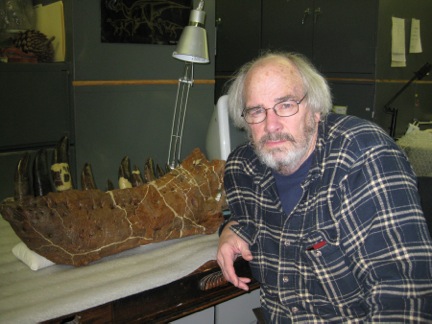 Dr. Jack Horner is the Regents Professor of Paleontology and Curator of Paleontology of the Museum of the Rockies at Montana State University. Jack is known for making many groundbreaking discoveries in paleontology, including the first dinosaur eggs in the Western Hemisphere, the first evidence of dinosaur colonial nesting, the first evidence of parental care among dinosaurs, and the first dinosaur embryos. He has received many awards and accolades during his career, including the MacArthur Fellowship “Genius Grant”, and honorary doctorate degrees from the University of Montana and Pennsylvania State University. Jack also has served as the technical adviser for all of the Jurassic Park movies and is the model for movie’s lead character, Dr Alan Grant. Jack is here with us today to tell us about his journey through life and science.

John R. “Jack” Horner was born and raised in Shelby, Montana, and attended the University of Montana for seven years majoring in geology and zoology. Although never completing a formal degree, the University of Montana awarded him an honorary doctorate of Science in 1986. Also in 1986 he was awarded a MacArthur Fellowship. Jack and his students excavate and study dinosaurs, particularly their growth and behavior. Jack has published more than 180 professional papers, 9 popular books, and more than 100 popular articles. Jack is Regent’s Professor of Paleontology in the Department of Earth Sciences, and Curator of Paleontology at the Museum of the Rockies, Montana State University in Bozeman, Montana. He is also a Senior Adjunct Scientist at the Smithsonian Institution. Jack lectures on dinosaurs, evolution and dyslexia. He lives in Bozeman.