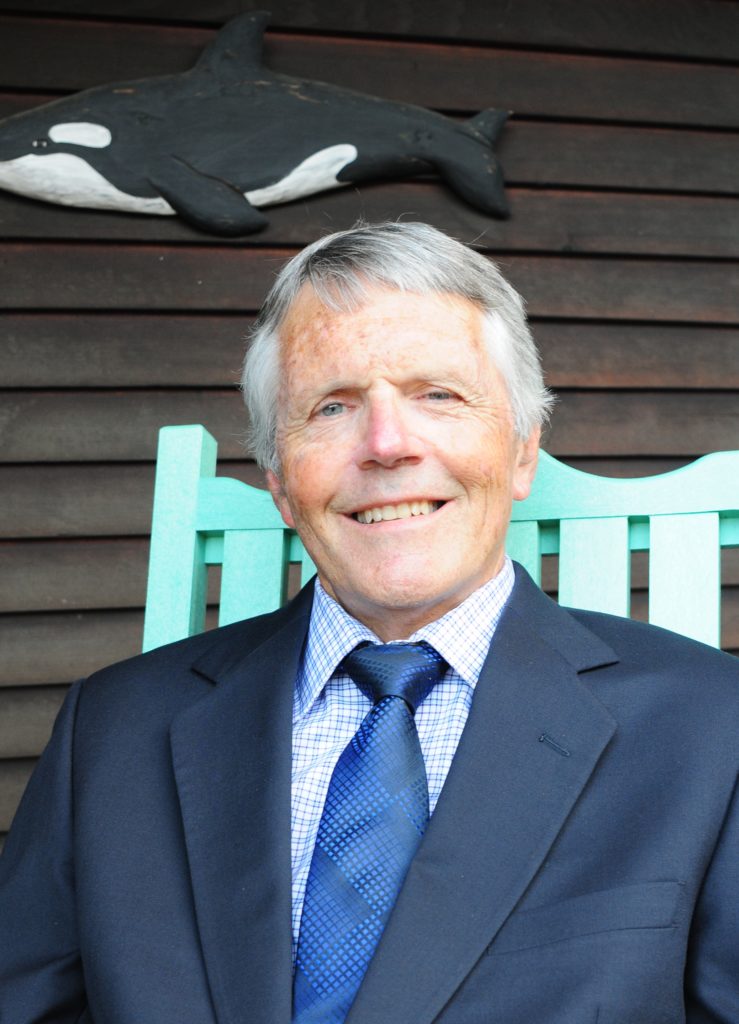 Dr. Jim Estes is Distinguished Professor Emeritus in the Department of Ecology and Evolutionary Biology at the University of California at Santa Cruz. In addition, Jim is author of the book Serendipity: An Ecologist’s Quest to Understand Nature, and he is a contributing scientist in a new documentary film called The Serengeti Rules. He received his bachelor’s degree in zoology from the University of Minnesota, his MS in biology from Washington State University, and his PhD in biology and statistics from the University of Arizona. For over 30 years, Jim worked as a research scientist for the U.S. Fish and Wildlife Service and the U.S. Geological Survey. He retired from his position there in 2007 to join the faculty at the University of California, Santa Cruz. Jim has been the recipient of numerous awards and honors over the course of his career, including the U.S. Geological Survey’s Schumaker Award for excellence in science communication, the Western Society of Naturalists’ Lifetime Achievement Award, and the American Society of Mammalogists’ C. Hart Merriam Award. Jim is also a Pew Fellow in Marine Conservation, a Fellow of the California Academy of Sciences, and a Member of the U.S. National Academy of Sciences. In our interview, Jim shares more about his life and research.

Life Outside of Science (2:49)
One of Jim’s major passions outside of science is fly fishing. He also enjoys hiking, reading, writing, and spending time with friends.

The Scientific Side (3:58)
Most of Jim’s career has been spent as a research scientist studying topics in ecology. He is interested in how nature works, and how species interact with one another and their physical environment. Specifically, Jim is working to better understand coastal marine ecosystems, kelp forests, and the kelp forest ecosystems in the North Pacific Ocean.

A Dose of Motivation (4:52)
“The species aren’t extinct, but the interactions are.” – Dan Janzen

What Got You Hooked on Science? (8:54)
When Jim was 4 years old, his father and grandfather took him on a daytrip to a lake in Wisconsin to go fishing. It was so exciting for him to be out on the water and see live animals around him. Jim enjoyed being outside as a kid, and he found nature fascinating. During high school, one of his cousins was a wildlife biologist on the faculty at Washington State University. When his cousin visited and told him stories of what he was working on in Africa, Jim was spellbound. After Jim finished college, he went to work with his cousin on his master’s degree. In the midst of his master’s degree work, Jim received notice that he was being drafted to serve in the Vietnam War. However, his physical exam uncovered an orthopedic abnormality in his knee which led to Jim being deemed unsuitable to serve. Suddenly, Jim had a new path before him, and he wasn’t sure what he was going to do. One of Jim’s friends informed him that the Atomic Energy Commission was looking for someone to go to Amchitka Island off the coast of Alaska to study sea otters. Jim didn’t know anything about sea otters, but this project was the start of an exciting research career.

The Low Points: Failures and Challenges (21:25)
By the late 1980s and early 90s, Jim had been working in the Aleutian Islands for nearly 20 years, and he was considering moving on to a different research area. He went to Amchitka Island to complete one last project where he was going to characterize the demography and behavior of a population of sea otters living at carrying capacity. Carrying capacity is the state of a population being as big as the ecosystem can support. For carnivorous mammals, there are very few places in the world where populations are at carrying capacity. Jim wanted to know how birth rate, survival rate, and feeding behavior might differ in a population living at carrying capacity versus a population that was not. He had a good idea of what to expect in terms of results, but nothing worked out. There was even a hint that the sea otter population had declined. After two years of not getting good results, Jim gathered up his things and left. On his way back home, he stopped at another island and met up with a colleague who informed him that the Navy and Air Force were interested in having research done on sea otters on some of the other Aleutian Islands. Jim thought that spending another year or two working on this research might help him figure out what was going on. While working on these other islands, he discovered that what he had seen was part of a catastrophic collapse of sea otters across all of Southwest Alaska. Killer whales had begun feeding on sea otters, likely because industrial whaling had decimated the prey they previously consumed. This led to a deeper understanding of transitions in the ecosystem, interactions between species, and the scale and nature of the interactions that linked industrial whaling to coastal ecological changes.

A Shining Success! (27:21)
In one project, Jim was examining the evolution of interactions between land herbivores and the kelp forest ecosystems. Kelp species that lived in deep water where sea urchins were abundant seemed resistant to being eaten by those urchins. In contrast, kelp in shallow water were highly susceptible to being eaten by urchins. Jim met a graduate student who was studying chemical defenses in kelp, and the graduate student offered to look at whether there were chemical differences in the deep water versus shallow water kelps. There were. Putting this in an ecological context, sea otters were very effective predators in shallow water, so they were able to keep the urchin numbers so low that the kelp didn’t need to evolve chemical defenses. In deep water, otters were less efficient predators, so urchins were more abundant, and the kelp needed chemical defenses. They also discovered that in areas like Australia and New Zealand where there were no predators, the kelp also had strong chemical defenses. It was exciting to uncover the important role that having a predator at the top of the kelp food chain had on the evolution (or lack of evolution) of chemical defenses in kelp.

Book Recommendations (32:02)
Serendipity: An Ecologist’s Quest to Understand Nature by Jim Estes, Naturalist by E. O. Wilson, The Song of the Dodo by David Quammen, The Serengeti Rules: The Quest to Discover How Life Works and Why It Matters by Sean Carroll, Privileged Hands: A Scientific Life by Geerat Vermeij.

Most Treasured Travel (35:41)
The Aleutian Islands are by far Jim’s favorite place that he has visited for science. It is an amazing and remote place where you can feel completely disassociated from humanity. Jim also loved the time he spent working in New Zealand. The people, the environment, and the places he saw were wonderful. He also had a phenomenal time at a scientific meeting in India a few years ago. It felt like a very different place than he was used to, and the remarkable people, culture, history, wildlife, and natural environments were memorable.

Quirky Traditions and Funny Memories (37:15)
Jim has had the pleasure of meeting and working with many wonderful scientists over the course of his career, and many of these individuals don’t fit the traditional stereotypes that people have of scientists. For example, his colleague Marten Scheffer is a theoretical ecologist in Holland who works on stability theory. Not only is Marten an exceptional scientist, but he is also an outstanding professional musician. Another example is Geerat Vermeij, an accomplished evolutionary biologist who is also blind. Jim met Geerat in 1975, and he was amazed that Geerat had learned so much about the world through using his hands. He was able to recognize every species of aquatic snail they gave him through touch alone.

Advice For Us All (43:18)
Don’t try to identify a goal too far in the future. Recognize that the world is always changing around you. The key to success is recognizing opportunities that arise as these changes occur, and making wise decisions in selecting where you go based on those opportunities.

Guest Bio
Jim’s research group is interested in the ecology of coastal marine communities, particularly the influences of vertebrate consumers on benthic community structure. Most of his field research has focused on the sea otter in the northeastern Pacific Ocean. He has ongoing research projects in the Aleutian Islands, central California, the Channel Islands, and New Zealand. The central theme of all these studies is to identify the important high-trophic-level consumers and their influences on the organization of the communities within which they live. In addition, Jim is interested in marine plant- herbivore interactions, the behavioral ecology of marine vertebrates, and the evolution of marine living in mammals.