Listen to the Episode Below (00:57:21)
Play / pause
1x
1.5x
2x
0:00
0:00
00:57:21
volume
iTunesGoogle PlayShare Leave a ReviewClammr ItListen in a New WindowDownloadSoundCloudStitcherSubscribe on AndroidSubscribe via RSS
Sign up to receive bonus content about our guests and sneak peeks for a guest from the next week’s interviews! 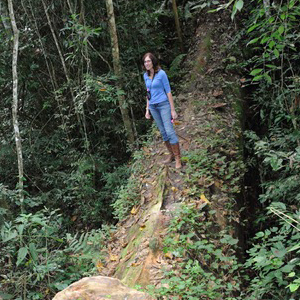 Dr. Karen Strier is the Vilas Research Professor and Irven Devore Professor of Anthropology at the University of Wisconsin-Madison. Karen received her B.A. in Sociology/Anthropology and Biology from Swarthmore College, and she was awarded her M.A. and Ph.D. in Anthropology from Harvard University. After completing her Ph.D., Karen served as a lecturer at Harvard University and subsequently became a faculty member at Beloit College. She joined the faculty at UW-Madison in 1989. Karen has received numerous honors and awards throughout her career, including being elected as a Fellow of the American Anthropological Association, a Fellow of the American Association for the Advancement of Science, a Member of the National Academy of Sciences, and a Member of the American Academy of Arts and Sciences. In addition, she is an Honorary Member of the Latin American Society of Primatologists and the Brazilian Society of Primatologists, and she has received an Honorary Doctoral Degree from the University of Chicago. Karen has been the recipient of the Presidential Young Investigator Award from the National Science Foundation, the H.I. Romnes Faculty Fellowship, Kellett Mid-Career Faculty Researcher Award, and WARF Professorship from UW-Madison, the Hilldale Award for Excellence in Teaching, Research & Public Service from UW-Madison, and the Distinguished Primatologist Awards from the American Society of Primatologists and the Midwest Primate Interest Group. She is currently the President of the International Primatological Society. In our interview, Karen shares more about her life and science.

Life Outside of Science (2:58)
When she’s not in the lab or observing primates in the wild, Karen enjoys being outside, going for walks in nature, cooking delicious multi-course meals for her friends and family, reading, and spending time with her cats.

The Scientific Side (4:35)
Karen is a Primate behavioral ecologist. She is working to understand the biological basis of human behavior, evolution, and adaptation by studying our closest living relatives. Research in Karen’s group involves observing a critically endangered primate, the northern muriqui, in its natural habitat to understand how their behaviors are similar to or different from human behaviors.

A Dose of Motivation (6:29)
“The most important thing in life is to love what you do and do what you love.”

What Got You Hooked on Science? (8:41)
Karen’s passion for science began early in her childhood. She was fascinated by lessons about the solar system in third grade, and she became captivated by anatomy during high school biology. Karen also became more and more interested in nature as she grew up, and she realized that she was happiest when she was outdoors. During her freshman year of college, Karen was hired to work in a research lab studying animal behavior. She enjoyed asking questions and creatively designing experiments to answer them. However, Karen wanted to study animals in the real world. She sent out about 40 hand-typed letters to researchers who were conducting field research on different types of animals. This led to her being invited to participate in a six month field project observing wild baboons in Kenya. After some convincing, Karen’s parents allowed her to travel to Africa to work as a field assistant with a graduate student she had just met. While sitting out on the savannah taking notes on baboons, Karen realized that this is where all of the things she loved in life intersected. She could work outside, watch animals, and do science.

The Low Points: Failures and Challenges (25:20)
About one third of the muriqui in the world live within a small patch of forest within a protected nature reserve. From 2014-2015, there were severe droughts in this area of Brazil, and two major forest fires broke out within this forest. Many of the muriqui survived, and the researchers were heartened when there was substantial rainfall the following year. However, the abundant rain resulted in a proliferation of mosquitoes, and there was a devastating outbreak of yellow fever. In addition to the tragic loss of hundreds of human lives, many primates died as well. After the outbreak, it was heartbreaking for Karen and her team to return to this once vibrant forest where the calls of howler monkeys used to be heard from all directions. The forest that was now silent and still. At first they couldn’t find any of the groups of muriqui they had been observing. Former students and research team members flooded in from all over to help. They were finally able to locate the primates, but about 10% of the population had perished. Fortunately, the population had increased enough beforehand that the species did not go extinct, but it was very frustrating to feel like there was nothing they could do to prevent this situation.

A Shining Success! (36:39)
One exciting moment in Karen’s research occurred in the late 1990s when she began assembling the demographic data on the muriquis and realized the population was growing. It was thrilling to see how big the population had become, how many babies were being born, and how the muriquis were beginning to split into more groups. This made her feel very hopeful about the future of these animals. As the populations grew, it was also remarkable to watch as the muriqui developed entirely new behaviors. For example, these primates are highly specialized for life in the trees, but they began to come down to the ground where they walked around and discovered new sources of food. It was reassuring to see the muriqui adapting and finding new ways to survive in their changing environment. Another success was their research team’s use of completely non-invasive methods to uncover the reproductive biology of the muriqui. They extracted steroid hormones from muriqui dung to go beyond the behavioral data from observations to get more precise information on reproductive cycles, behaviors, and gestation lengths. Karen and her colleagues have also had great successes in their genetic studies of the muriqui. These studies involved extracting DNA from muriqui dung to determine reproductive skew, paternity, and multi-generational effects on reproductive success in these critically endangered primates. In addition to scientific value, their research has been uncovering information that will be key for developing a conservation management plan to help preserve this species.

Book Recommendations (3:58)
Karen likes reading books by authors from all over the world, and she has particularly enjoyed the work of a variety of Brazilian authors.

Most Treasured Travel (46:05)
Over the past 36 years, Karen has had a wonderful time traveling in Brazil for field research. One area of Brazil called the Ibitipoca Reserve is particularly remarkable. This reserve is owned by a Brazilian businessman who is committed to conservation. He has made concentrated reforestation efforts, developed ecotourism to support the reserve, and provided opportunities to benefit the local communities. Karen and her team are currently working with the reserve owner on a conservation project to help protect and preserve the small population of muriquis that live in the forest there. This is just one example of how one person with a vision can make a big difference in conservation.

Quirky Traditions and Funny Memories (50:47)
The forest is Karen’s laboratory, and she spends a lot of time doing exciting research projects outside in collaboration with many wonderful, dedicated people. When they were in Brazil working on the fecal steroid hormone study, Karen remembers sitting down to enjoy a meal with her colleagues at a local restaurant. The conversation included an in-depth discussion of the dung composition and defecation behaviors of the primates they were studying. The muriqui are vegetarians that often eat leaves from the cinnamon family, and as a result, the dung is not terribly unpleasant to collect. Everyone wanted to make sure they were getting the best data possible in this really cool non-invasive study. However, Karen was sure the people sitting at other tables must have thought they were a strange group.

Advice For Us All (55:24)
Surround yourself with people who are smarter than you are. This way, you will continue to be challenged and to learn from other people. Also, work hard, but have fun. Find something bigger than yourself that you love to do and that resonates with your values and your passions.

Guest Bio
Karen’s research is mainly aimed on understanding the behavior of wild primates and the potential of primates to adapt in our rapidly changing world. She coordinates one of the world’s longest running primate field studies, focusing on the critically endangered northern muriqui monkey, in one of the species’ last remaining strongholds in the Atlantic Forest of southeastern Brazil near the city of Caratinga, Minas Gerais. The Muriqui Project of Caratinga that Karen leads is internationally recognized for its pioneering discoveries about the behavioral ecology, reproductive biology and life histories of muriquis, whose peaceful, egalitarian societies offer glimpses into an alternative way of life very different from our own. Karen’s ongoing studies are simultaneously contributing to conservation and management programs for muriquis and other endangered primates. She loves being outdoors, in nature, near animals, and walking with friends. When indoors and not working, her interests are reading and cooking (especially tapas), and spending time with her cats.