Listen to the Episode Below (00:41:45)
Play / pause
1x
1.5x
2x
0:00
0:00
00:41:45
volume
iTunesGoogle PlayShare Leave a ReviewClammr ItListen in a New WindowDownloadSoundCloudStitcherSubscribe on AndroidSubscribe via RSS
Sign up to receive bonus content about our guests and sneak peeks for a guest from the next week’s interviews! 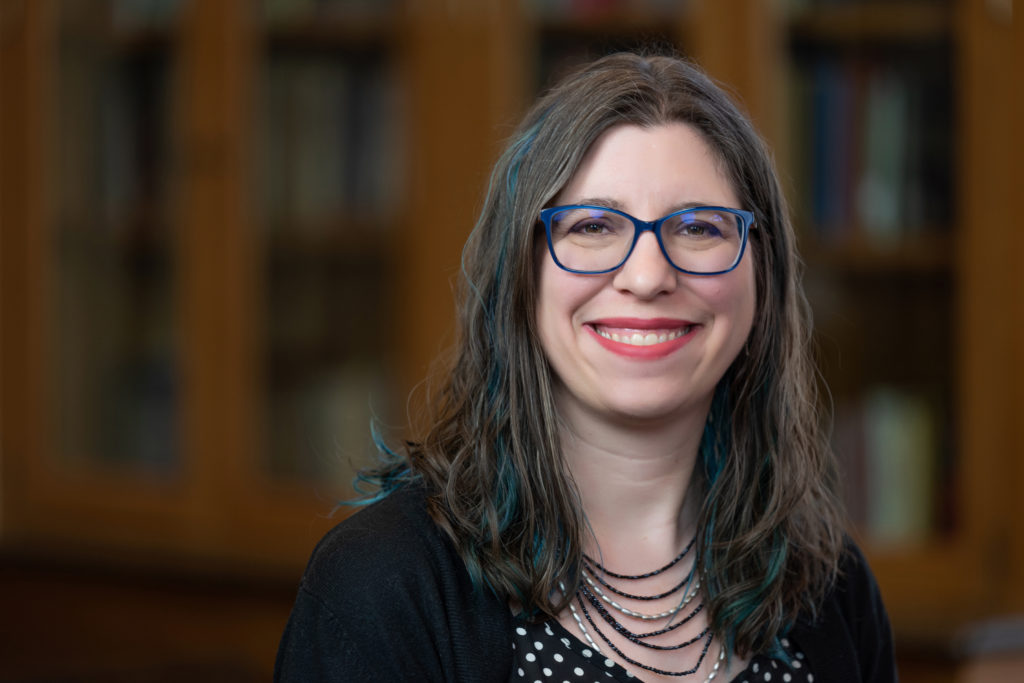 Dr. Lisa Whitenack is an Associate Professor in the Departments of Biology and Geology at Allegheny College. She received her B.S. in geology from the University of Illinois at Urbana-Champaign, her M.S. degree in geological sciences from Michigan State University, and her Ph.D. in integrative biology from the University of South Florida. Lisa served as an adjunct faculty member at the University of Tampa for about a year. She conducted postdoctoral research in geology at the University of South Florida before joining the faculty at Allegheny College. Lisa has been named Volunteer Partner of the Year by the Crawford County K-12 Career Education Alliance for her science outreach efforts. In our interview, Lisa shares more about her life and science.

Life Outside of Science (2:16)
When she’s not at work, Lisa loves getting creative with a variety of crafts such as crochet, cross-stitch, and painting. She also enjoys refereeing roller derby, hiking, and spending time with her family.

The Scientific Side (3:50)
Through her research, Lisa aims to better understand how animals work from a mechanical perspective. She studies how sharks have used their teeth over their 400 million years of evolution, how salamanders jump, and how stone crabs perform pinching movements.

What Got You Hooked on Science? (6:55)
Lisa became fascinated with the natural world during childhood visits to her grandmother’s summer home outside of Chicago. The house was on a lake and surrounded by woods. She spent sunny days fishing with her dad and wandering around the woods. On rainy days, Lisa poured over her grandmother’s copy of The North American Guide to Wildlife, and she particularly loved the section on sharks. However, sharks weren’t Lisa’s only scientific passion. She was also obsessed with dinosaurs and constantly brought home cool rocks she found at the lake. Lisa’s interests in science continued throughout her school years, and when it was time to enroll in college, she was pretty sure she wanted to become a high school chemistry teacher. Unfortunately, Lisa really struggled with her college chemistry courses. She signed up for a geology class to fulfill an academic requirement, and this course changed everything. Despite her parents’ concerns, Lisa changed her major to geology and never looked back. One summer in college, Lisa worked outside on a dinosaur dig in Wyoming. This was where she met the person who piqued her interest in graduate school and would later become her husband.

The Low Points: Failures and Challenges (18:01)
In the first semester of Lisa’s PhD studies, she had to write a paper on the structure and anatomy of the tissues in shark teeth. Lisa wrote her paper, and she thought she did a great job. She turned it in early to her PhD advisor, and she was shocked at the sight that greeted her the next morning when she walked into the lab. There were three stacks of journal articles and books on her desk that towered above her head. Her paper was on top, and her advisor had written “try again”. Lisa was absolutely mortified. However, she wasn’t about to give up. Lisa re-wrote her paper, incorporating many of the new references, and the final paper was much better as a result. Another major challenge Lisa encountered occurred during her freshman year of college. She had never failed a class until that first year in college when she took calculus III. Failing this calculus class meant that Lisa only narrowly missed being placed on academic probation, and her parents wanted to transfer her to a less rigorous school. Despite these pressures, Lisa was able to turn her situation around. She took the course again over the summer, figured out better ways to study, and passed calculus III.

A Shining Success! (22:36)
For Lisa, passing her qualifying exams in graduate school was a major success. She entered a graduate program in biology with a very limited background in biology, and she had difficulty with some of her initial PhD courses. Throughout her early graduate school days, Lisa had a major sense of the imposter syndrome. She didn’t feel like she belonged there, she didn’t know what people in the lab were talking about, and she wasn’t sure she was going to make it through the program. The qualifying exams involved a grueling four days of closed notes written exams and a three hour oral exam. To make matters worse, Lisa became very ill in the midst of her exam. She managed to finish the written exams but had to postpone the oral portion until after she underwent surgery and recovered over the next six months. This was stressful because it meant Lisa had to study and prepare all over again for her oral exam. Despite the health problems she experienced, Lisa persevered and succeeded in passing her qualifying exams.

Most Treasured Travel (26:37)
The Smithsonian Museum of Natural History has an offsite location in Maryland where they store a wide variety of specimens that aren’t able to be stored at the Museum’s main location in Washington, DC. Lisa has visited this facility many times to collect data on shark specimens, and it is always an adventure. There are jars of preserved specimens packed onto rows and rows of shelves, rooms with large metal bins full of preserved specimens, and seemingly random items propped up against walls. She has spent countless hours digging through bins of preserved sharks, meticulously measuring specimens, and admiring many of the unique items housed in this offsite facility.

Quirky Traditions and Funny Memories (32:11)
During graduate school, Lisa and her fellow lab members stopped by a local craft store to pass some time before the next showing of a movie they wanted to watch. At the craft store, they were delighted to discover a variety of ceramic gnomes on clearance sale. Unable to pass up this bizarre bargain, they bought 13 gnomes. They then hid these gnomes around the lab, including one in their advisor’s fishing tackle box. Their advisor had no idea where these gnomes came from or who had hidden them. As he found them in the lab, he would put them on top of the lab freezers. Once a few of the gnomes were found, Lisa and her colleagues would hide them again. This prank went on for about two years, and it expanded to include collaborators and colleagues mailing her advisor gnomes from across the country. Her advisor then began receiving (and responding to) mysterious emails from Norm the lab gnome.

Advice For Us All (38:16)
When you are having difficulty making a decision on what to do next in your life, take a deep breath, and then do what you have to do. Don’t worry about what everyone else is going to say. Do what is right for you. Also, don’t let critical feedback from others stop you from doing something you really believe in.

Guest Bio
Lisa’s scientific research uses tools from engineering, physics, geology, statistics, and biology to figure out why critters are shaped the way they are, and what it means for the evolutionary history of the critter. She mostly studies the 400 million years of shark teeth (and modern sharks) and how they work, but she also studies salamander jumping, crab pinching forces, snail shell strength, and fish feeding. Lisa’s other area of scholarship is about K-12 STEM (kindergarten – 12th-grade science, technology, engineering, and mathematics) education. She spearheads “4th Graders as Scientists”, which brings every 4th grader in her local school district to Allegheny College for a day of hands-on Science. She is also on the science team for the Gills Club, a national program for girls that highlights women shark scientists. Outside of her job, Lisa crafts, bakes, referees roller derby, volunteers for the local Girl Scouts, reads a ton of fiction, gardens, and is a mom to two curious kids and three cats.