Listen to the Episode Below (00:40:46)
Play / pause
1x
1.5x
2x
0:00
0:00
00:40:46
volume
iTunesGoogle PlayShare Leave a ReviewClammr ItListen in a New WindowDownloadSoundCloudStitcherSubscribe on AndroidSubscribe via RSS
Sign up to receive bonus content about our guests and sneak peeks for a guest from the next week’s interviews! 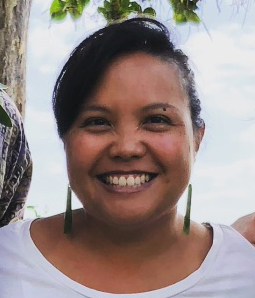 Dr. Rosie Alegado is an Associate Professor of Oceanography and Sea Grant at the University of Hawai’i at Mānoa where she is Director for the Center of Ulana ‘Ike Center of Excellence and a member of the Center for Microbial Oceanography: Research and Education. She is also Director of the School of Ocean and Earth Science and Technology Maile Mentoring Bridge Program, Chair of the City and County of Honolulu Climate Change Commission, and a Member of The National Academy of Science and Engineering and Medicine Ocean Studies Board. This Board serves as the U.S. National Committee for the United Nations Decade of Ocean Science for Sustainable Development 2020-2030 Initiative. Rosie received her B.S. degree in Biology with a minor in Environmental Health and Toxicology from MIT. She was awarded her Ph.D. in Microbiology and Immunology from Stanford University. Afterwards, Rosie conducted postdoctoral research in evolutionary biology at the University of California, Berkeley before joining the team at UH Mānoa. In this interview, she shares more about her life and science.

Life Outside of Science (2:43)
When she’s not working, Rosie loves learning about the natural world, and she has lately been re-connecting with her cultural heritage as a native Hawaiian. She and her daughter practice hula, and she also engages in formalized chant training. When she is overloaded and needs a break, Rosie enjoys reading romance novels and other books.

The Scientific Side (5:13)
She studies microbes, the smallest living organisms who do a lot of the unseen work in our world. Rosie is particularly interested in understanding how microbes have shaped our world.

What Got You Hooked on Science? (7:34, 13:33)
Rosie’s interest in science started with a love of nature. Her parents were both professors in the Department of Ethnic Studies at the University of Hawai’i at Mānoa, so she got a sense early on that she could be a scholar too and that an academic environment was a place where she could thrive. In ninth grade, Rosie had an excellent honors biology teacher, and Rosie really enjoyed the experiments they did in class. She realized that she wanted to be the one coming up with scientific questions and doing the work to answer them. Rosie then began participating in local science fairs, investigating topics ranging from naturally occurring compounds that could be used as hair bleach to the evolutionary history of a flightless Hawaiian bird. She fully immersed herself in each project, and when she went to MIT for college, Rosie fell completely in love with microbes.

The Low Points: Failures and Challenges (20:07)
When doing science outside of a lab, there are a lot of factors that can’t be controlled. For Rosie, there have been a lot of challenges related to weather events. Rosie is working on a project in partnership with a Native Hawaiian organization to restore an 800-year-old fish pond on the island of O’ahu. One day, they were at the pond collecting data and taking samples when a hurricane warning was issued. They knew a storm was on the way, but it had started to dissipate, so they thought they might be in the clear. However, it suddenly started to get really windy, and they had to abandon the field site and all of their equipment. There were torrential rains, and it was a little scary. Everyone made it to safety, and they were surprised to discover after the storm that their equipment was still there and collecting data. This allowed them to record valuable information about the storm. A similar situation occurred working on another project on the island of Moloka’i. The largest storm the island had seen in years arrived right when they were trying to collect baseline data. Rosie has developed a mindset that they have to be prepared for everything and have extras of all necessary supplies and equipment because you never know what is going to happen in the field.

A Shining Success! (23:16)
Rosie likes to celebrate successes of all sizes early and often. In addition to celebrating big grants and papers, she gets excited every time a polymerase chain reaction (PCR) reaction successfully amplifies their DNA of interest. It is a basic lab technique, but there are so many different ways it could go wrong that it’s always a relief when it works. Mentoring students is also very rewarding for Rosie, and she feels amazing when a student is able to successfully solve a problem they have been working on for a long time. For example, one of her students was struggling for many months with tracking a particular microbe in the fish pond they are restoring. However, the student didn’t give up. After a lot of trial and error, they finally got it to work. These kinds of successes really affirm the value of not giving up.

Book Recommendations (25:47)
The Properties of Perpetual Light by Julian Aguon and Lessons from Plants by Beronda Montgomery

Most Treasured Travel ( 27:50)
During high school, Rosie was a member of the school’s hiking and environmental science club. Their advisor was a big thinker who thought it was important to do science in Hawai’i but also to connect with other Indigenous People of the Pacific. Since they were doing research on a bird that migrates between Hawai’i and Alaska, he arranged for the group to go on a trip to Alaska. In addition, they traveled to New Zealand to meet with avian biologists and paleontologists to look at bird bones. The group also went to Rapa Nui (Easter Island) in homage to the sea-faring ways of their Hawaiian ancestors. These travel experiences were meant to inspire them, support their research, celebrate their heritage, and connect them with scientists and Indigenous Peoples in other places.

Quirky Traditions and Funny Memories (31:15)
As a postdoc working with Dr. Nicole King, Rosie enjoyed how the lab was dedicated to working hard, having fun, and eating well. Nicole frequently hosted lab dinners at her house, and the group got to hang out and eat in the backyard. As an early pioneer in the use of microbes called choanoflagellates as both an evolutionary model and a cell biological model system, Nicole had a need to bring people together to advance work in this area. As a result, the lab hosted regular gatherings of scientists working on choanoflagellates. It was fun to be surrounded by people from all over the world who were united in thinking about a really cool microorganism. Before these meetings, the students and postdocs would have a flurry of activities to get everything ready. This often involved trips to Costco to get supplies and try to figure out what food they should serve.

In addition, as a high school student doing research, Rosie often had to compromise and use less convenient but safer methods in lieu of easier and faster methods that may have had more risk. Needing to find alternatives forced her to think creatively and come up with unique solutions. When she was working on a project investigating the evolutionary history of a local bird, she convinced her now-husband (then-boyfriend) to have his family save all of their chicken bones so she could use them for her project. They got really gross, but he still helped her isolate DNA from the bone marrow of these chicken bones. Rosie took a picture of him during the process, and she keeps this picture on her desk and looks at it every day.

Advice For Us All (37:01)
Remember that no one can care more about your research and making progress in your career than you. Your mentors and colleagues are there to help and support you, but you are ultimately in charge of your work. For Rosie, accepting this sense of responsibility and accountability in graduate school was really important, and she applies it now even more broadly to think about her ethical responsibility as a scientist. Are we doing the best we can for the environments we study and the people in those environments? Keep in mind that the field sites where scientists do their research are important places worth studying because of the lives that have lived there.

Guest Bio
Rosie ʻAnolani Alegado was born and raised in Kaʻiwiʻula Oʻahu, and lives with her family in Āhuimanu, Kahaluʻu. Her work focuses on investigating how microbes shape the adaptive potential of their ecosystem across a broad range of biological and temporal scales. In partnership with Paepae o Heʻeia, her group has tracked the influence of restoration, storm,s and multi-annual climate patterns on the health of Heʻeia Fishpond since 2014. Together with the non-profit Kuaʻāina Ulu ʻAuamo and Hawai’i Sea Grant, she is involved in developing kūlana noiʻi, a process wherein researchers build and sustain equitable partnerships with community. She is deeply committed to increasing participation of underrepresented minorities in STEM and is the Director of the School of Ocean and Earth Science and Technology Maile Mentoring Bridge Program, providing individualized mentoring and peer support for undergraduates transitioning from community colleges to Mānoa. In 2018, she was confirmed to the City & County of Honolulu Climate Change Commission.