Listen to the Episode Below (00:46:34)
Play / pause
1x
1.5x
2x
0:00
0:00
00:46:34
volume
iTunesGoogle PlayShare Leave a ReviewClammr ItListen in a New WindowDownloadSoundCloudStitcherSubscribe on AndroidSubscribe via RSS
Sign up to receive bonus content about our guests and sneak peeks for a guest from the next week’s interviews! 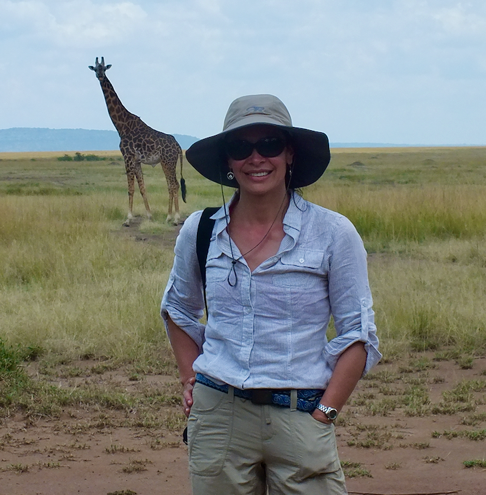 Dr. Sandra Encalada is the Arlene and Arnold Goldstein Associate Professor in the Department of Molecular Medicine and a Dorris Neuroscience Center Investigator at Scripps Research Institute in California. Sandra received her bachelor’s degree in physics from Earlham College, her M.S. in population genetics from the University of Florida, and her Ph.D. in molecular genetics from the University of Oregon. Afterwards, she was awarded a Damon Runyon Cancer Research Foundation Postdoctoral Fellowship to conduct research at the University of California, San Diego. Next, Sandra worked as an Assistant Project Scientist and Neuroplasticity of Aging Fellow at the University of California before joining the faculty at Scripps Research. She has received numerous awards and honors over the course of her career, including The Glenn Foundation’s Glenn Award for Research in Biological Mechanisms of Aging, The Baxter Foundation Young Faculty Award, and The Ellison Medical Foundation New Scholar in Aging Award. In our interview, Sandra shares more about her life and science.

Life Outside of Science (2:32)
Lately, Sandra has been enjoying reading, playing games, and bonding with her 5 year old daughter. She also likes to spend her free time swimming in the ocean with her “pod” of fellow swimmers and practicing jazz improvisation on the piano.

The Scientific Side (4:27)
Sandra is a cell biologist whose research focuses on how proteins and other materials travel from the cell bodies of nerve cells all the way to the tips of the nerve cells. This process (called “transport” or “trafficking”) is critical for proper function of nerve cells, and it is highly regulated by a set of nonomachines called molecular motors. Sandra’s lab studies transport in healthy neurons and also how failures in transport may be related to or contribute to neurodegenerative disease.

A Dose of Motivation (7:51)
“Fight for the things that you care about, but do it in a way that will lead others to join you.” – Ruth Bader Ginsburg

What Got You Hooked on Science? (13:51)
Growing up in Ecuador, Sandra was encouraged by her parents to think about science from an early age. In her early childhood, she was captivated by electronics, and she once broke her father’s radio by plugging the output wire into the wall outlet instead of the speaker. When she was 12 years old, Sandra told her family over dinner that she wanted to have a career thinking about how things worked, but she wasn’t sure what path may lead to that kind of job. Her father suggested she study math and physics to learn how to quantify aspects of how things work. Sandra took his advice, and she soon developed a love of physics. It wasn’t until later in college when Sandra started taking biology classes that she discovered her interest in cells and her fascination with the intricate structure of microtubules within cells.

The Low Points: Failures and Challenges (26:49)
In diseases like Alzheimer’s disease, Parkinson’s disease, and prion diseases, the axons of neurons are affected by disease processes and begin dying first. Axons develop large swellings that look like beads on a string, and these swellings are full of accumulated material that has gotten stuck. Sandra began digging in the literature to try to determine how they formed, but she wasn’t able to find much information. She decided her new lab would work to model these axonal swellings and determine how they form in neurons. It has taken a long time to get to the point where they could put together a story about how the swellings form, and there have been a few major setbacks along the way. One challenge they faced was that the findings of a postdoc in Sandra’s lab seemed to be in direct contradiction with a very established tenant of how aggregates are formed in axons. However, no matter how many times they replicated the experiments, the data were clear. Sandra and her postdoc spent months trying to figure out what was going on. It turned out that what they were seeing was true in the very earliest stages of the formation of aggregates in axons, and the established findings in the literature were consistent with later stages of this process. Still, it was really challenging to explain their new piece of the puzzle to a field which was used to thinking about the process a certain way. This made it difficult to publish papers and get grants, and their work received a lot of criticism.

A Shining Success! (30:45)
Sandra and her colleagues have a paper coming out in print soon that describes the set of genes and proteins they discovered which depend on the movement of the nanomachines that walk along microtubules. When a mutant prion protein is put in neurons, the vesicles these proteins are transported in start to merge together when they encounter other vesicles during transport down the axon. The prion protein has a strong affinity to form aggregates and large sacs of pathological prion protein begin to grow and create swellings along the axon. Their work on this project revealed a lot about the mechanisms and requirements for the formation of swellings, as well as the process of movement of this protein in neurons. In addition, they identified potential targets in this process for future therapeutic interventions. Getting this work published was a big success, and Sandra recently received favorable news about a grant submission as well. It has been a long road, but the work has been very rewarding. Sandra likes to think about the success in terms of all of the people who have contributed to this project over the years and the impact this project has had on their careers.

Book Recommendations (12:10, 33:11)
A Feeling for the Organism: The Life and Work of Barbara McClintock by Evelyn Fox Keller, The Biggest Bluff: How I Learned to Pay Attention, Master Myself, and Win by Maria Konnikova

Most Treasured Travel ( 35:18)
When Sandra was a Master’s student at the University of Florida, she studied the population genetics of sea turtles. Her advisor was invited to give a talk in Cuba because the country was interested in protecting the very endangered sea turtles there. Sandra’s advisor asked her to go to Cuba in his stead to represent the lab and give a presentation on their work. It was an eye-opening experience for Sandra in many ways. She was a young student, and she was impressed by the amazing resilience of the scientists in Cuba who often were resource-limited, as well as their kindness and generosity. Sandra planned to stay in Cuba for five days, and she had brought enough money to pay for her hotel room. However, due to a communication failure before departure, she only had half of the money that she needed. She tried to pay the remainder with her Visa credit card, but they didn’t accept Visa cards at the time. It all worked out well in the end because one of the students who was hosting Sandra during the visit invited Sandra to stay with her family who lived nearby. Sandra will never forget how they opened their hearts and home to her during her time of need, despite the limited resources they had.

Quirky Traditions and Funny Memories (38:08)
Nobel Laureate Ardem Patapoutian is known for his sense of humor and history of pulling pranks on colleagues. Sandra enjoys working with Ardem in the Dorris Neuroscience Center at Scripps Research Institute, and his lab is situated on the floor right above hers. Ardem won the Nobel Prize in 2021, but many of the festivities surrounding this achievement were cancelled or adjusted due to COVID-19. The ceremonies were held virtually and medals were awarded individually at local facilities to limit travel. Ardem made the best of these limitations by inviting his colleagues to join in these festivities, including the ceremony where he was given his Nobel Medal on the University of California, Irvine campus. Sandra has fallen for Ardem’s pranks often in the past, including some of his prank emails sent on April Fools’ Day. She had been contemplating how to prank him back, and she was thrilled when she saw an opportunity. Shortly after winning the Nobel Prize, Ardem was selected to receive the prestigious Medal of Lebanon, and Sandra received an email invitation to attend the event for the ceremony. Sandra was pretty sure the invitation was legitimate, but she sent Ardem an email telling him how clever his recent email prank was inviting her to this event. She claimed that she emailed her RSVP to the “organizer” telling them that she could not accept anything short of a physical invitation written in gold and plated with diamond rings. Artem replied immediately, frantically explaining that it was real and that he hoped she hadn’t sent that reply. Sandra apologized and said it was already sent. There was no response. After a little while, Sandra ran upstairs to tell him that it was just a joke, and she hadn’t actually sent a rude reply. When he heard this, Ardem laughed so hard that there were nearly tears in his eyes.

Advice For Us All (43:10)
When faced with a difficult decision, follow your gut feeling, and don’t look back. In the career of a scientist, there are many obstacles. Keep fighting for the great science you produce. It is important to support and care for the people who are doing science. Encourage the diversity, thoughts, and efforts of your colleagues, postdocs, and students.

Guest Bio
Sandra’s research is focused on understanding how nanomachines inside neurons, called molecular motors, interact with their cargo to transport them along microtubules in axons and dendrites of neurons. Her research utilizes a combination of cell biology, genetics, and high-resolution microscopy in model systems including mammalian neurons, mice, and in the soil nematode C. elegans, to understand how movement of proteins and other components inside neurons is faithfully accomplished. Sandra’s work integrates this basic cell biological knowledge to also dissect how defective transport in thin axons leads to causing traffic jams, resulting in accumulations inside axons that play a role in Alzheimer’s disease, in prion diseases, and in other neurodegenerative syndromes. Outside of work, Sandra likes to swim in the ocean (with a wetsuit!), which she closely shares with sea lions, once in a while with a sea turtle or two, and with dolphins and lots of fish, off the La Jolla coast. She also is teaching herself how to improvise some jazz on the piano, which she reveals is a mighty challenge compared to her classical piano upbringing. All of this occurs when she is not busy with her 5 year old girl and with her partner, and with their very highly active bernedoodle.