Listen to the Episode Below (00:42:06)
Play / pause
1x
1.5x
2x
0:00
0:00
00:42:06
volume
iTunesGoogle PlayShare Leave a ReviewClammr ItListen in a New WindowDownloadSoundCloudStitcherSubscribe on AndroidSubscribe via RSS
Sign up to receive bonus content about our guests and sneak peeks for a guest from the next week’s interviews! 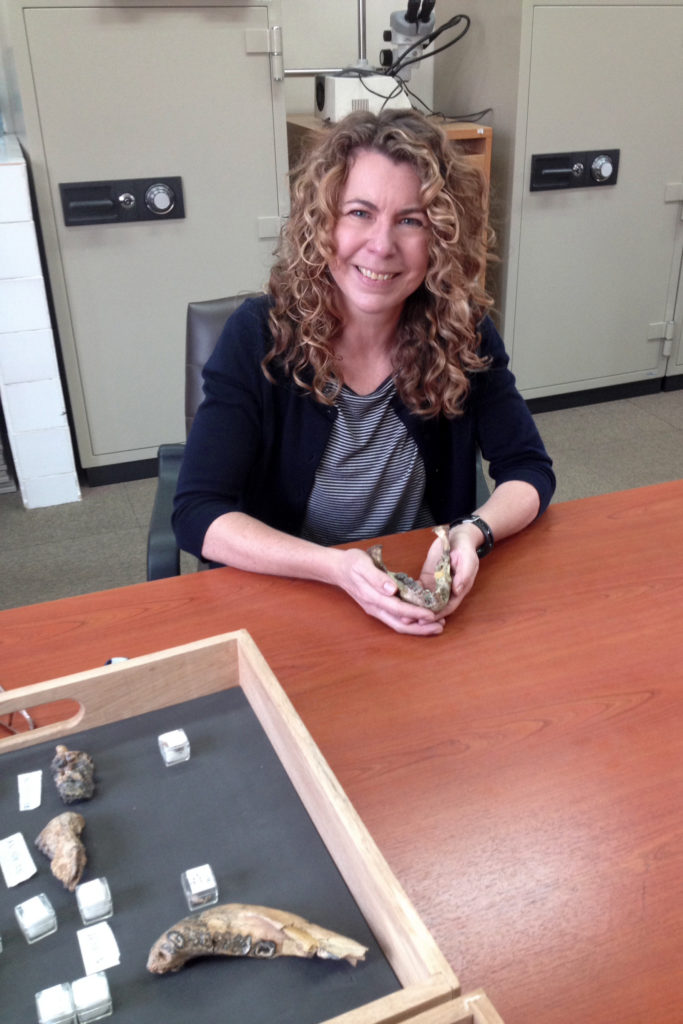 Dr. Shara Bailey is Professor and Associate Chair of the Department of Anthropology at New York University (NYU) and Associated Researcher in the Department of Human Evolution at the Max Planck Institute for Evolutionary Anthropology in Leipzig, Germany. She also serves on the Executive Committee of the American Association of Physical Anthropologists. She received her B.A. in Psychology and Anthropology from Temple University, and she was awarded her M.A. and Ph.D. in Anthropology from Arizona State University. Afterwards, Shara conducted postdoctoral research in the Center for the Advanced Study of Human Paleobiology at The George Washington University. She then worked as a Research Scientist at The Max Planck Institute Department of Human Evolution before joining the faculty at NYU. She has received numerous awards and honors throughout her career, including The Golden Dozen Teaching Award from New York University, a Goddard Junior Faculty Fellowship, a Kavli Frontiers of Science Fellowship from the National Academy of Sciences, and others. In our interview, Shara shares more about her life and science.

Life Outside of Science (2:37)
Outside of her research, Shara is passionate about mentoring students to help them discover what they are passionate about and how to turn their passions into a career. In addition, she is an avid outdoors enthusiast who enjoys hiking, skiing, kayaking, going for walks, and watching the sun set. Shara is also an artist, and she specializes in painting landscapes and finding the beauty in everyday things.

A Dose of Motivation (6:55)
“If you’re serious about changing your life, you’ll find a way. If you’re not, you’ll find an excuse.”
-From You Are a Badass: How to Stop Doubting Your Greatness and Start Living an Awesome Life by Jen Sincero

What Got You Hooked on Science? (10:26)
As a kid, Shara was interested in horses and horse evolution. She remembers having posters with horses and labels for all of their different parts. When it came time to choose a topic for a school project, she was excited to learn more about the evolution of horses and early horse species. However, Shara was discouraged from pursuing science as a career. Along the way, Shara became interested in art and painting. She started college as an art major, but she left school partway through her degree to take a job as an interior designer. She hated it. When Shara returned to school, she decided to explore her interests in psychology. After completing all of her psychology credits, Shara still needed to take one more science class. She saw a biological anthropology course in the catalog and thought it would be more interesting and less intimidating than the alternatives. This course inspired her to learn more about anthropology. Shara added a major in anthropology, but she still didn’t know what she wanted to do after graduation. With the help of a career aptitude test, shara decided to pursue graduate studies in anthropology. She applied to one graduate program, and she was accepted. This is where her career in anthropology and research on dental anthropology began.

The Low Points: Failures and Challenges (19:19)
One of Shara’s biggest failures was not receiving funding for a major research grant to purchase equipment that her department could use to do high resolution 3D scans of fossils. The hope was that they could use the equipment to advance their research, as well as to train students on state-of-the-art technology in the field. This was a disappointing setback, but it has not stopped Shara from doing the research she aspires to do. By developing relationships with colleagues at the European Synchrotron Radiation Facility in France and the Max Planck Institute in Germany, she is still able to conduct research requiring cutting-edge equipment and techniques. The relationships and collaborations you form with colleagues in science can be key to your success.

A Shining Success! (23:42)
In many of the studies Shara works on, she contributes key information on the teeth of fossils that colleagues have discovered. This is rewarding, but in these cases, the projects don’t feel fully like her own. Last summer, Shara and her colleagues published a study on a new fossil. Shara was particularly proud of this work because she conceived of the idea, collected the data, and led the project. A new fossilized jaw bone was discovered, and as Shara reviewed the micro-CT images of the roots of the teeth, she noticed something strange. Instead of having two roots, the tooth had three roots. This was exciting because lower molars with three roots are extremely rare outside of Asian and Asian-derived populations. Shara combed through the clinical literature on modern teeth to confirm this. She was surprised that this 100,000 year old fossil found on the Tibetan Plateau had characteristics from Asian populations. Shara and her colleagues proposed that this may be the first indisputable morphological evidence for admixture (inter-mating) between our species and an archaic group of humans.

Most Treasured Travel (28:58)
After returning from one international trip, Shara planned to visit Yogyakarta in Indonesia to study the remains of Homo floresiensis, a small ancient hominin species commonly referred to as the “Hobbit”. Unfortunately, on her way back from the first trip, she had placed her passport in the inner pocket of her coat and left her coat on a train bench. Shara didn’t realize until she got home, did laundry, and was preparing to depart for Yogyakarta. It was a holiday weekend, she had no passport, and there was no way she was going to make her flight. After managing to frantically secure a replacement passport the following week, Shara made the 30 hour trip to Yogyakarta from where she was working in Germany. Instead of a weeklong trip, Shara arrived, collected the data she needed, stayed overnight, and immediately embarked on her 30 hour return trip. Though Shara was ultimately able to collect the data she needed, it was a particularly sad turn of events because she’s not sure if or when she will get an opportunity to return to explore this part of the world. Beyond this traumatic travel experience, Shara has had many wonderful trips to places all over the world. Her favorite place to travel for science is the Dordogne region of France. It is spectacular, and she can definitely understand why early humans decided to live there. She visited a museum in Dordogne for a few days for work, and she’d love to go back sometime to enjoy the natural beauty and kayak on the Dordogne river.

Quirky Traditions and Funny Memories (32:00)
In graduate school, Shara took a course in advanced osteology, and she spent a lot of time in the osteology lab learning about bones and teeth. There was a rule that you weren’t allowed to eat in the lab, but one day, Shara snuck in a small bag of pretzels to snack on while she studied. Deep into her work, she accidentally popped a piece of an old arthritic lumbar vertebrae into her mouth. Shara quickly realized that it was not a pretzel, and she was disgusted. Though it wasn’t funny at the time, it makes her laugh in hindsight, and it really made her appreciate the importance of following the lab rules.

Advice For Us All (39:08)
Look with new eyes. Don’t let your preconceived ideas influence the questions you ask or how you go about answering them. Keep your eye on the road, not the mountain that lies ahead. Don’t focus on the big, seemingly insurmountable challenges. Just keep making small steps to your goal. Also, remember that if you don’t ask, the answer will always be no.

Guest Bio
Shara’s research focuses on dental morphology and morphometrics of early hominins. The Dental Anthropology Laboratory houses an extensive collection of fossil casts ranging from Paleogene primates to Late Pleistocene hominids. These are used for both teaching and research purposes. Shara has multiple ongoing research projects working with collaborators from around the world. In collaboration with the Max Planck Institute Department of Human Evolution Shara is investigating new fossil finds from North Africa and assessing their relationship(s) to other fossil hominins to better understand the origin of modern humans in Africa. In addition, Shara is revisiting hypotheses about the taxonomic attribution of and phylogenetic relationships among East and South African early hominins using crown metric and morphological information collected on nearly every fossil hominid species. Further, in collaboration with Jacopo Moggi-Cecchi, Juliet Brophy, Luke Delezene, and Matt Skinner, Shara is conducting a comparative study of the deciduous (baby) teeth of Homo naledi species. Her analyses include examining crown morphology, crown shape, and tooth development.